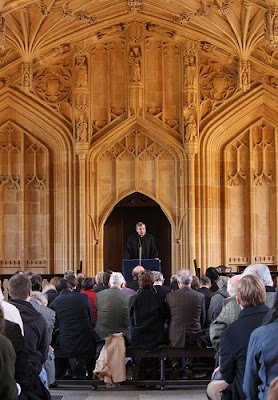 Here is a summary of Cardinal Pell's lecture last week to the Oxford Newman Society: Varieties of Intollerance: Religious and Secular, courtesy of CNS.
Confronting religious intolerance regularly and publicly is among the "crucial tasks" of Christians in the 21st century, said an Australian cardinal.

Cardinal George Pell of Sydney said the Catholic Church's freedom in the Western world was under pressure from a new and dangerous trend of the use of anti-discrimination laws and human rights claims to attack the role of religion in public life and individuals' right of conscience.

In a March 6 lecture titled "Varieties of Intolerance: Religious and Secular," he said Christians needed to "recover their self-confidence and courage" if they were to counter the problem.

"Put simply, Christians have to recover their genius for showing that there are better ways to live and to build a good society," he told the Oxford University Newman Society.

"The secular and religious intolerance of our day needs to be confronted regularly and publicly," he said. "Believers need to call the bluff of what is, even in most parts of Europe, a small minority with disproportionate influence in the media. This is one of the crucial tasks for Christians in the 21st century."

As his primary example of mounting intolerance, Cardinal Pell cited the treatment of U.S. Christians and Mormons who supported Proposition 8, the constitutional amendment that reversed California's gay marriage law in November.

He described how churches and temples were subjected to violence, vandalism and intimidation, and how some supporters of the amendment were forced from their jobs and blacklisted.

"We should note the strange way in which some of the most permissive groups and communities, for example, Californian liberals in the case of Proposition 8, easily become repressive, despite all their high rhetoric about diversity and tolerance," he said.

"There is the one-sidedness about discrimination and vilification," he said, because anti-Christian "blacklisting and intimidation is passed over in silence."

Cardinal Pell added that in a healthy democracy people should be free to discuss and criticize each other's beliefs.

Reciprocity, he said, was essential to this but "some secularists seem to like one-way streets," seeking to drive Christianity from the provision of education, health care and welfare services to the wider community.

The cardinal predicted a "major escalation in the culture wars" if President Barack Obama signed into law the Freedom of Choice Act, which would sweep away restrictions on abortion and deny medical practitioners and hospitals the right to conscientiously object to participating in abortions. As of March 10, the act had not been introduced in Congress.

"Clearly there is an urgent need to deepen public understanding of the importance and nature of religious freedom," said Cardinal Pell. "Believers should not be treated by government and the courts as a tolerated and divisive minority whose rights must always yield to the minority secular agenda."

He explained that the effect of the rising intolerance of modern liberalism was to "enforce conformity" and to strip Christianity of the power of its public witness.

"There is no need to drive the church out of services if the secularization of its agencies can achieve this end," he added.

The pressure against religion in public life, he said, stemmed mainly from a misplaced belief in "absolute sexual freedom."

He said that as sexual freedom became a driver of consumption, people could see the "re-emergence of slavery in Europe and Asia, the booming exploitation of pornography and prostitution, and the commercialization of surrogacy, egg donation, and the production and destruction of human embryos and human stem-cell lines."
Posted by Fr Ray Blake

Full text has just been put up in HTML format:

Thanks for the coverage, Father!