Rogue Priests and Bishops and Schism 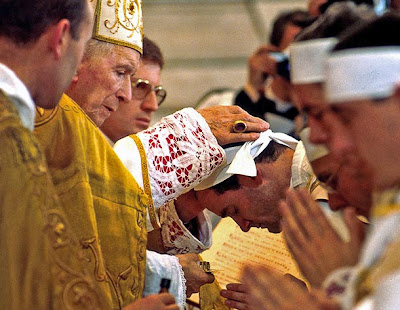 One of the things that must have been at the back of the Holy Father's, which is only hinted at, in his letter about the lifting of the excommunication of the SSPX, is the problem of rogue priests and worst, rogue bishops.
A real a genuine fear of the Holy Father is sacraments celebrated outside of communion with the Church. In the case of the SSPX, as neither their bishops or priests have jurisdiction, both marriages and the sacrament of penance celebrated by them are as invalid as the baptisms celebrated at St Mary's in South Brisbane, in which the priest used the formula, "In the name of the Creator, Redeemer and Sanctifier". Here is the latest on that story. I hope SSPX priests warn their followers of this before they give these sacraments.

The fact that the Catholic Church considers these sacraments as invalid is an assertion that their followers are still within the bosom of Mother Church and subject to her discipline. We don't, after all, consider Anglican marriages invalid, unless a Catholic is attempting marriage in an Anglican Church.

The situation is pretty horrendous when one considers the effects of a rogue priest, but they pale into insignificance with a rogue bishop, because a bishop can create other bishops. What Fr Kennedy has done in Brisbane will end when his ministry ends but with a rogue bishop the damage can go on forever, they can create priests, but more significantly they can create other bishops with valid orders, thus creating a parallel Church, a schism, the obvious example is the Old Catholic schism from the 19th century, a modern one is that created by Archbishop Malingo.

Schism has always been feared in the Church more than heresy, which is why Popes are always loathe to depose or excommunicate errant, even heretical bishops, better for them to be dealt with gently in the Church, or even quietly grow old and die in communion with it, than be cast into outer darkness where they can do untold damage.

One of the positive acts of all four of the SSPX bishops is that they have not ordained other bishops, apart from Bishop Rangel in Campos, whose diocese was eventually reconciled but have actually sought to have their own excommunications lifted and to be reconciled to Peter, this is truly filial and deserves to be recognised as such. For the Pope, the great fear is that as the bishops grow older, and face death, and no solution is found there is always the prospect that one of them might ordain another bishop and what was schismatic act might indeed become an actual schism.
at March 16, 2009

Thank you for that intelligent and thought provoking post. I went on to read up on it via the link, and saw some interesting parallels to the current situation - though not about the sspx. It seems to take about 40-50 years for ultra-liberal movements to burn themselves out or at least lose momentum. Hurray.

But the Lefebvrist Four have ordained another bishop - Bishop Rangel in Campos after the death of Bishop Antonio de Castro-Meyer in 1991.

They did consecrate another bishop, though - Don Licinio Rangel, to succeed to the Diocese of Campos; and that was incontrovertibly schismatic, since the diocese already had a Rome-appointed Ordinary. Bp Rangel reconciled on his deathbed.

As you're no doubt aware, Orthodoxy approaches the question of "validity" quite differently: if one is not "hooked up to the mains" (i.e. canonical Orthodoxy), it makes no difference how state-of-the-art one's wiring happens to be.

Bishop Rangel in Campos - forgot him, I'll correct it.

Funny you should write this. Maybe not, I think I have disagreed with one thing on this blog since I started reading it a year or so ago. I was thinking about the sadness of valid sacraments outside the Church around the New Year after reading some blog posts. The Anglo-Catholic Fr Hunwicke with great happiness recounts various ploys for what amounts to stealing the sacraments, explaining the help to be asked from established schismatic groups in this, and what was done in the past.

It's very odd, he writes such tres tres POD posts, swooning over liturgical details of various sorts, and yet seems not to think there is anything at all wrong with clandestine (for PR reasons) collaboration with excommunicates, in the sacraments.

When the first protocol between AB Lefebvre and the Vatican was drawn up, the provision for the marriages was a 'sanatio in radice ad cautelam' (as a precaution), so the marriages were not automatically treated as invalid, in spite of the legitimate doubts that hang over them. I expect the same provision will form part of any new agreement.

As for another consecration, there are rumours in France that the pressure to consecrate another bishop will soon rise. With BW out of the frame, the sacramental schedules for confirmations and ordinations by the remaining three bishops are apparently very hectic. At least that is what is being said.

Add that pressure to the pope's age, the fact he is their best chance for a reconciliation, and the danger of factionalism once the waves from the Williamson affair has died down, and you have a lot of pressure on Bishop Fellay to move forward.

This brings to mind the story of the Catholic Apostolic Church, the 'Irvingites' who looked for the imminent Second Coming of Christ.

Irving had been an assistant to a Dr Thomas Chalmers. He was a famous London preacher and attracted huge audiences. Following his teaching, and in readiness for the Apocalypse, twelve new 'apostles', were appointed by ministers of seven churches at a ceremony in London in 1835. These churches had come into being when a number of 'charismatic' congregations, including Irving's, had been expelled from their parent bodies.

Initially the congregations under apostles carried on with their former traditions of worship. There was a call, however, for liturgical expression of the Church's witness. Elaborate liturgies were devised, derived mainly from the Eastern Orthodox, Roman Catholic and Anglican Churches. A large number of clergy were required for each church, organised in four divisions, an 'angel' ( a role similar to that of a bishop), six elders, seven prophets and at least seven deacons.

The deaths of the apostles as the years passed guaranteed the eventual demise of the main body, since they had reserved to themselves the authority to ordain to the traditional major orders: the episcopate (known as angels), priesthood and deacons. Thus, with the death of the one surviving apostle in 1901, such ordinations ceased and services were curtailed. The last angel died in 1960 and the last priest in 1971, when all Catholic Apostolic sacramental ministrations therefore came to an end.

There have been two other rogue bishops in the 20th century who have, though the bishops they consecrated, been the sources of hundreds of "wannabes" (as the Americans say).

I think Bishop Williamson, if he still has any credibility among his sympathisers, would not start consecrating bishops unless he founded his own priestly society and trusted one of the priests enough to be his successor. He certainly knows that a rogue bishop who starts consecrating willy-nilly instantly loses all credibility.

My observation of the general situation is that no "episcopus vagans" has any credibility, and fewer men are deluded enough to go that way. Look at their websites. They invariably have more bishops than laity!

Weren't the Old Catholics the ones that consecrated some Anglican bishops? Not sure whether I've got this right, but I think this means that some Anglicans who claim descent from them are validly ordained, even though Anglican orders per se aren't valid. Hence present confusing situation.

Delia, yes, there has been "union" and involvement in ordinations since 1930ish.

You are comparing apples with oranges.

Your analogous comparisons are not
sound.

Delia - that is one of the things Fr Hunwicke describes (puzzlingly, with apparent satisfaction) in the posts to which I gave links.

Fr Burke: A sound post, which accurately and succinctly outlines the issues. A rogue bishop is much more dangerous than a rogue priest, regardless of whether he leans 'left' or 'right'.

However, I do fear that negotiations with the SSPX will not bear fruit before the death of the present pope; thus, real schism may not be avoided.

Paul: I smile (but not mockingly) at your comment that Father Burke is comparing apples with oranges. Both have much in common: they are fruits, bear their seeds within, are similar in shape, grow on trees, contain pectin - and are rather good for one's health. It is a fallacy to say that they cannot be compared.

Thank you, Father and Berenike.

You write, "In the case of the SSPX, as neither their bishops or priests have jurisdiction, both marriages and the sacrament of penance celebrated by them are as invalid as the baptisms celebrated at St Mary's in South Brisbane..."

I thought that their sacraments were valid but illicit.

Bill,
Both these sacraments depend on jurisdiction for validity.