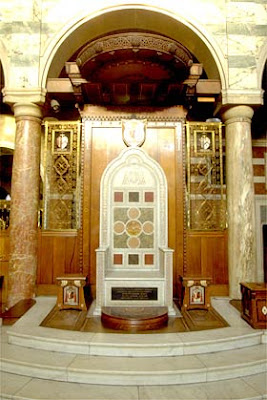 I was half expecting an announcement from Rome on the Westminster succession last week, half expecting because I thought it strange for the present incumbent to be in Rome, if an announcement was going to made in his diocese.
The rumours are that the Congregation for Bishops have discussed this three times already, which would suggest that the current Archbishops have been weighed in the balance and found wanting, now the suggestion is being put around that we should expect to hear nothing until after Easter, maybe. I think it is unlikely an announcement will be made whilst the Pope is in Africa next week.
My understanding is for most episcopal appointments the Congregation having received a terna from the relevant nuncio and diocese and comments from other interested bodies, as well as the Secretariate of State and the Congregation for the Doctrine of the Faith, who might well veto a particular name. A new terna is drawn up and submitted to the Pope, normally the Pope names the one at the top of the list. In the case of auxiliary bishops like Fr Wagner, the erstwhile nominee for Linz, the papal nomination is notional. In the case of Metropolitans and especially of those Sees which traditionally are headed by someone who will elect the Pope's successors, more care is given and the ope does directly intervene. After the Pope has named someone the nuncio contacts them, normally they are given 48 hours to consider the appointment and search the closets of their past for skeletons before the name is made public.
It seems to me that we should turn our attention to auxilliary bishops, religious superiors or notable parish priests, though if a consensus can't be reached on one of these we might be back to the Archbishops for a safe pair of hands, if one can be found.
The problem we have in England is that those who might have proved most attractive as a Benedictine appointment have been kept in the shadows, they have not been appointed as seminary rectors, vicars general or auxilliary bishops.
at March 15, 2009

There's a great comment on 'Holy Smoke' today - 'The night of the long croziers!'

The suspense is killing me!

Anyway, all we ask for is a good and holy man who is true to the church in all ways.

You haven't been approached yet, by any chance, Fr? If so, please think carefully and say yes!

there are in my opinion,Father; one or two very fine seminry rectors amongst the brethren and three very fine VGs!

You know, if you'd just remember to turn your cell phone on when you're busy on the internet....

It's not the sort of message you'd leave to the answer machine function.

Exactly, Father! (p.s. - I don't think the Pope leaves until Tuesday, so we MIGHT get the news tomorrow - but don't hold your breath)

Yes, interesting to speculate, Father. While the Catholic blogsphere was agog over Paolo Rodari’s prediction last week, Thursday and Friday came and went without the predicted announcement. I sometimes think the Vatican sees this happening and in a “We’ll fix you” moment, holds off on the announcement for awhile…

But more likely is the idea that there is some reluctance there about all the candidates put forward. After the Wagner debacle, there is likely to be more reticence about the selection and fears of repeat of the Linz situation.

I usually scour the daily Vatican Bollettino for news on appointments and it is interesting to note, as you pointed out, the provenance of many of the new appointments. Many have been seminary rectors. Many have Roman experience. Many are auxiliaries. But the one thing that stands out for me is the number who are from Religious Orders! In the past you would see the occasional Jesuit or Dominican.

Recently there has been quite a number from Orders such as the Salesians, Franciscans, Capuchins and Benedictines.

I’m not sure if this is a more recent trend and indicative of the Holy Father’s agenda. Of course there have always been bishops – and Cardinals – from Religious Orders. Sometimes they work out well, sometimes they’re disasters. Cardinal Dulles was a Jesuit, but Rembert Weakland (of Milwaukee infamy) was a Benedictine…

And perhaps the guy who was tapped turned it down!

[The 80 year old priest I know well told me that fairly early in his career (he was a whiz kid doing 2 years of work in one in Roman, when everything was in latin) that he could tell they were trying to "groom" him for bishop somewhere, and he basically told them he didn't want to go in that direction, thanks very much...he'd rather be a priest/professor]

I'm still inclined towards Low Sunday-ish. But what do I know?

Like Gem said, perhaps the chosen one just turned it down.
The former parish priest of my cathedral here in Japan was a lovely man, an Augustinian. I asked him once why he didn't become a bishop.
He gave, very simply, two reasons:

a. He was a priest by calling, and wanted to be close to the people to serve them

b. He was not a politician!