Good News from the LMS 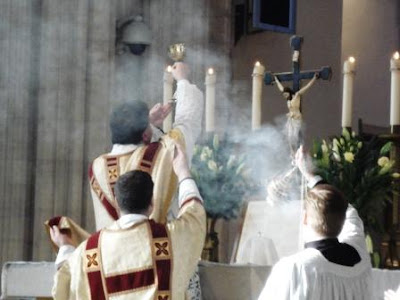 I have just been asked to post this by the LMS, which I am pleased to do.

After prompting from the Latin Mass Society of England and Wales, The Universe has introduced a weekly page of news and listings for the Extraordinary Form of the Roman Rite (Traditional Latin Rite). The page will commence in the issue of Sunday 15 March.

The Universe will also publish the full weekly calendar for the Extraordinary Form. This will be provided each week by Gordon Dimon, the LMS’s Senior MC, who also compiles the LMS’s annual Ordo which is used by priests worldwide.

John Medlin, LMS General Manager, said: “The Universe is obviously moving to catch up with The Catholic Herald which already has wide coverage of Traditional Rite affairs and even the ultra-liberal Tablet which publishes a weekly link to the Traditional calendar on the LMS’s website” (http://www.latin-mass-society.org/).

He went on: “The Universe has dragged its feet for years in relation to the Extraordinary Form so this is good news. I will be asking all the LMS’s Representatives across England and Wales to send stories and pictures to The Universe.

“I think The Universe had found that its core ‘justice and peace’ market was ageing and collapsing and is urgently seeking to connect with younger generations who are developing a great interest in the Traditional Rite. The LMS will do all it can to help!”

Of the weekly Catholic papers in England and Wales, only The Catholic Times is now holding out against the Traditional trend, but apparently changes will soon be underway there as well.

What we are seeing is liturgical renewal and it needs watching closely because it could grow faster than anyone might reasonably have expected. This is not a local phenomenon - I see the same thing in Sweden, and it is again the 25 to 40 age group who are being drawn to this spirituality - there seems to be a great desire to reclaim authentic Catholicism in its fullness.