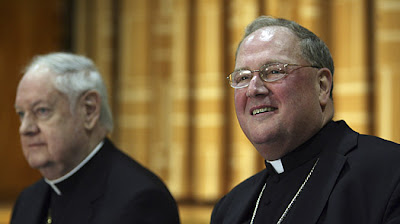 Time Magazine has a piece on the new Archbishop of New York, I am trying to think of an English/Welshman who might have similar qualities for Westminster.

• Born on Feb. 6, 1950, the oldest of five children. In 1964, he entered St. Louis Preparatory Seminary South in Shrewsbury, Mo., and graduated from Cardinal Glennon College with a degree in philosophy.

• Ordained a priest for the Archdiocese of St. Louis on June 19, 1976. He earned his doctorate in American-church history at the Catholic University of America in Washington in 1983. His dissertation was on Archbishop Edwin V. O'Hara, a founder of the Catholic Biblical Association of America.

• In 1987, was appointed to a five-year term as secretary to the Vatican's diplomatic mission in Washington. (He speaks fluent Italian.) He returned to St. Louis in 1992 and was appointed vice rector of Kenrick-Glennon Seminary.

• Wrote a book in 2000, Priests for the Third Millennium, which is used in some seminaries in the U.S. Composed mainly of a series of lectures he gave while in Rome, it lays out the challenges currently facing Catholic priests and seminarians.

• Named auxiliary bishop of St. Louis in 2001 after another priest, former Archbishop Rembert Weakland, resigned after acknowledging that the archdiocese paid a $450,000 out-of-court settlement to a man who claimed Weakland had sexually assaulted him.

• In Milwaukee, has received good grades for reaching out to young people (occasionally over a beer or two) and recruiting new seminarians; the Milwaukee archdiocese expects to ordain six men in 2009, as opposed to just one ordination a few years ago.

• A Herculean fundraiser, helped his archdiocese avoid bankruptcy amid the lawsuits that followed the priest sexual-abuse scandal. He effectively closed a $3 million budget deficit in 2008 and also started a fundraising campaign that he claims has raised $57.5 million in pledges, more than halfway to its goal.

• Knows only a bit of Spanish, the mother tongue of one-third of Catholics in the New York City Archdiocese.

"I come before you in awe, and I admit some trepidation knowing that I've got an awful lot to learn."
— Addressing the diocese at a news conference following a Mass at St. Patrick's Cathedral in Manhattan
Los Angeles Times, Feb. 24

"This is the time we priests need to be renewing our pledge to celibacy, not questioning it."
— Responding to claims that celibate commitment is to blame for clerical sexual abuse
New York Times, Sept. 5, 2003

"I'd prefer a bit of Jameson's, but milk will do."
— Responding to a woman's inquiry on how the Archbishop takes his coffee
New York Times, Feb. 23

"Does it haunt me? Yes, it does. And I'm not afraid to admit that."
— On his handling of the sex-abuse scandal, calling the issue the most challenging of his tenure in Milwaukee
Milwaukee Journal Sentinel, Feb. 24

"I've already learned how to order a hot dog from the cart outside the cathedral."
— On getting used to his new hometown
New York Daily News, Feb. 23

"Happiness attracts."
— On his strategy for increasing recruitment to the priesthood
New York Times, Feb. 23

"He gives religion a good name."
— Monsignor Thomas J. Shelley, a priest and a historian at Fordham University who has known the Archbishop for 25 years
New York Times, Feb. 23

"He is with Rome on the big issues and on the little ones. But he does not do so in a dictatorial fashion."
— William J. Thorn, journalism professor at Marquette University in Milwaukee
New York Times, Feb. 24

"I was at the vespers when he was installed, and there's a party where the bishop knocks on the door. Most do it timidly — tap, tap. Not him — bang, bang! It echoed through the cathedral and let everyone know that Timothy Dolan was there."
— The Rev. Steven M. Avella, a history professor at Marquette University in Milwaukee

If the quote "He is with Rome on the big issues and on the little ones..." is anything to go by, then I'm afraid I'd struggle to name anyone on the conference. I don't mean by saying that to sound off against the bishops, just that from where I stand, it seems to be the case.

- where has the support been for
the Holy Father in recent weeks?

- where has SP been thoughtfully and generously applied in a wholly positive way?

- where has there been any evidence of the Benedictine reform in the Liturgy?

- where was there any commemoration of the 40th anniversary of Humanae Vitae?

- why does the CES, whose Head has the public support of Archbishop Nichols (see this week's Catholic Herald letters page) not rail against the plans to introduce sex education for young children?

Just a few thoughts. Many prayers are needed for our bishops and for the appointment of a sound Archbishop of Westmintser. My heart is not over-flowing with high expectation. Envy is a sin, but I confess to a modicum of envy of New York and other Sees in the Western Church.

He was born twelve years to the day before I was.

Slight correction in the CV, Father.

He was named auxiliary bishop of St. Louis in 2001 under then-Archbishop (now Cardinal in Philadelphia) Rigali...

He was appointed Archbishop of Milwaukee in 2002, following the resignation in disgrace of Archbishop Weakland...

Off-topic a bit, but in case you haven't seen it yet:

I don't get good vibes about what this might indicate for other decisions where the pope's authority might be challenged.

Applying this to England & Wales where can we find someone called Timothy, with Irish parentage, who likes to evangelise over a beer or two, who has studied in Rome, teaches at a seminary and is doctrinally orthodox? Perhaps someone should write to The Tablet and ask them?