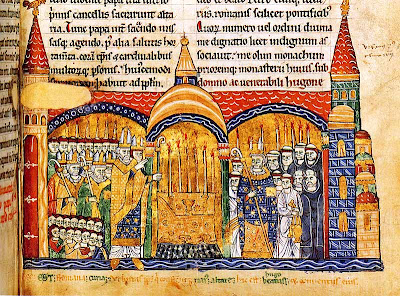 At the beginning of the 20th century the Pope appointed directly slightly more than 750 0f the worlds bishops, the remainder, the majority were appointed by emperors, kings or governments, or in some very few cases by local chapters of canons.

The practice of the first centuries was to elect bishops by popular acclamation of the laity and the clergy, local bishops ratified his election by participation in his consecration or at least by having his name inscribed on their diptychs. The Popes involvement was minimal and passive, but the bishop would pray for the Pope in the canon of the Mass, invoke its twenty-four saints, perhaps adding more according to long held local custom. Out of devotion, filial piety, he himself would either go on pilgrimage or send some of his clergy and leading laymen to the City of the Two Apostles, taking with them their bishop's portion of the Romefeoh or Peter's Pence. At the heart of this relationship the local bishop and the local Church shared the faith of the Bishop of Rome. The role of the Bishop was essentially to be the faithful bearer of tradition. For the most part heresies and aberrations of discipline were dealt with on a local level, first of all by the bishop himself or the metropolitan, or a local synod, brothers corrected brother. Only when this failed, or when there was serious doubt, or the need for an appeal, was there recourse to Rome.
It strikes me that the ideal way of electing a bishop today is by acclamation of the clergy and people. Though he should have an eye to the larger picture a bishop is primarily responsible for the people of his local Church, working in a paternal collaboration with his clergy for the salvation of the souls entrusted to him.
This is wonderful in theory of course but imagine the type of disaster that we would have today if the local church actually did elect its bishop. First of all the break down in catechises has meant that no-one is quite sure what exactly the Catholic or Christian faith is. The chaos that we see in some parts of the Church, for example, the toleration of the Archbishop Bathersby of Brisbane for twenty-four years of invalid baptisms and the open altar of Sr Mary's, the extraordinarily odd liturgies in the diocese of Linz, confusion over the divinity and uniqueness of Christ in much of India, the breakdown of marriage and teaching on sexuality in much of Europe, the diversity of understandings of theology and practice in the US, ranging from Fabian Bruskewitz to Roger, Cardinal Mahony and even in England we see the evident tensions between the doctrines of the Roman Church and what we see on the ground.
Posted by Fr Ray Blake

I quoted on an earlier post from Eamon Duffy that barely 50 years earlier the pope had only appointed a tiny number of bishops. With recent events in mind this, relatively, modern practice clearly can be problematic.

In the Orthodox Church, in theory at least, the bishop is chosen by the clergy and the people. At the recent election of Patriarch Kyrill the electors consisted of bishops, priests and lay representatives of the the different dioceses

There are clearly serious tensions between the Vatican and many dioceses. Some form of consultation and involvement by a wider and more representative group does suggest itself rather strongly.

Yes, what is it to be Catholic? is the big question. It is at the heart of the negotiations with the FSSPX on the one hand and Bishop Conry's interview in the Catholic Herald befre Christmas.

A really good start is to be obedient to the Church's Teachings and support the Holy Father!

There is more consultation than meets the eye even now. The Holy Father gets the names of the TERNA of course but the Nuncio has often sounded out names from prominent laity and clergy and may well send up his own selection of names. Even old Mildew himself has twice been asked to name names for Bishops. Whatever the case the candidate is normally carefully vetted...but in the end the HolyFather has the last word and modernists can slip through the net.

Fr Blake: I rather think that the practice of the early Church concerning the choosing of bishops is preferable to what happens today. Perhaps something along the lines of the election process in the Eastern Churches would be possible today, but it would require a significant change in how one understands that aspect of the Church. There are many who quite mistakenly believe that the current method has been in use for hundreds of years, rather than for little more than a century.

Of course, there is one important case in which the Latin Church does continue the ancient tradition of prayer, deliberation and voting: it is how the Bishop of Rome is chosen.

The issues you raise (e.g. in Australia) concerning poor practice and bad theology would, in theory, be handled at a local (i.e. Australian)level before being referred to the Holy See. It would be a case of holding one another accountable, which is a healthy way to live. I firmly believe the Church is as capable of this today as it was in its infancy.

Intersting points. But hard to see that popular election would result in a better outcome in the current environment!

Terra, Thank you for correcting me.

Great post. BUT there is one thing we do have as an advantage in modern times. The Internet. Seriously, it's harder to "hide" information from the "unwashed public."

So there really is NO EXCUSE for letting crud like you mention continue. Mahoney is simply a joke, an obnoxious joke...the situation in Australia, with invalid baptisms is much more serious. Why can the pope NOT suspend a bishop's faculties for him allowing things to continue?

Fr Clifton assures us that "the candidate is normally carefully vetted..."

Problem is, by whom and by what criteria. I suspect we can all come up with examples where the careful vetting has not always worked - and by then it's too late.

It worked well with St Ambrose. I believe St Augustine was also elected.

I knew about popular acclamation centuries ago, but I never realized that Rome didn't fully centralize the selection of bishops until quite recently. I wonder if the anti-papal tendencies of many bishops are a conscious or subconscious reaction against, or maybe a cultural vestige of, the slow but steady erosion of local ecclesiastical autonomy by the Vatican.

The episcopate seems to have a culture all of its own, with Romano-scepticism very high on the list of attributes. One of the things that seems to happen to a lot of new bishops is that they get housetrained very rapidly by their confreres into regarding Rome not as friend but as foe.

You get the impression that many bishops' conferences think of the Vatican as a sort of religious version of Brussels: a group of overweening foreign bureaucrats who keep introducing new rules and are hellbent on centralization and control. The Holy Father is seen not as the Vicar of Christ but as an ecclesiastical Jacques Delors, wanting to pull more and more power into the centre. A bishop who resists a papal directive thinks of himself as a sort of metric martyr, not as someone who is causing grave scandal or wounding the mystical body of Christ.

I agree with you entirely when you say that local election of bishops nowadays would be a disaster -- the laity are just not "fit for mission" when it comes to choosing our leaders. The Catholic Church would rapidly degenerate into a liberal protestant shambles if bishops were picked by popular vote. Or perhaps I should say, even more of a shambles.

Good comment Francis - agreed entirely. The laity are just not "fit for mission".

'The Catholic Church would rapidly degenerate into a liberal protestant shambles'... Aren't we almost there already Francis? Just take a peak at Fr Tim's latest post on the 'Circus' that is passed off as Catholic Liturgy at the annual 'fest' in Los Angeles!

How did Cardinal Mahoney get his red hat and what is more important how in Heaven's name after all the abuse, does he still have the mandate to wear it?

"I agree with you entirely when you say that local election of bishops nowadays would be a disaster -- the laity are just not "fit for mission" when it comes to choosing our leaders."

Looking at the lives of bishops from, what I would regard as better days, such as Dr. Briggs the Vicar Apostolic for the Northern District one cannot be impressed by their calibre and suitability.

With the relative novelty of complete control over the promotion of candidates being acquired by Rome, largely due to external circumstances, the average calibre of appointees has been declining ever since. Instead of men of natural ability and vision 'yes men' have been generally chosen on the basis of their unquestioning compliance and deference to the Roman Curia. The fruits of this have been particularly apparent since the end of the Second World War.

To suggest that Catholics in their own dioceses are not "fit for mission" is grossly unfair and insulting and would be better applied to many papal appointments - the Linz debacle seems a good example.