I would want to be banned


In the Los Angeles Archdiocese, Williamson is hereby banned from entering any Catholic church, school or other facility, until he and his group comply fully and unequivocally with the Vatican's directives regarding the Holocaust.

Can you image him actually wanting to be in the Cardinal's diocese? These are pictures from the Los Angeles RE Congress, I would want to be banned! 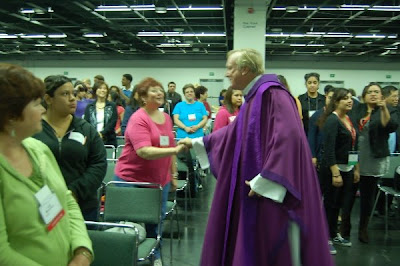 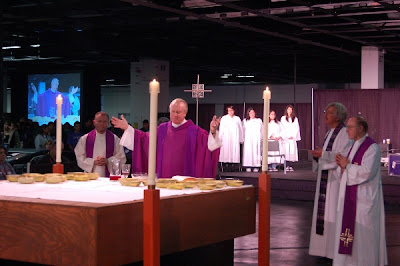 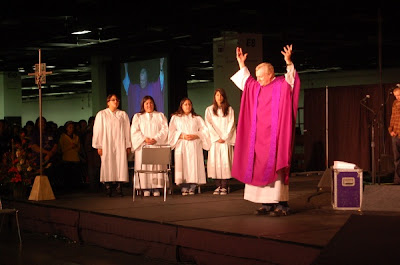 My mother-in-law has little bowls like that, they're for her cocktail nibbles.

Me too! (Laughing out loud)

Can you imagine him turning up in Brighton,

Mahoney: "I've brought a few friends to come up on the Altar as well. This is Sandy the liturgical dancer. Here is my labrador, Trevor, and ah, not forgetting the band, Max on bass, Jock on bagpipes and Steve on electric guitar and vocals."

Laurence,more likely,
Absolutely delighted your Emm., you do realise it is the EF, you will..., then you will..., after which ....

Yes, lovely, Mass at the side altar, you have twenty minutes before the Poles arrive.

If there is any good that can be said to have come out of the +Williamson affair it's that when we accuse liberals like Cardinal Mahony of hypocrisy it seems to be sticking. Ten, five even one year ago this wasn't the case. Somehow it just seemed to bounce off them. The shifting sands of the Sahara are finally getting to the liberals and I detect a note of desperation in Cardinal Mahony's words.

More lile: "You have 20 minutes before the Pope arrives!"

What about his complying unequivocally with Summorum Pontificum? Motes and beams.

Was that the Cardinal celebrating mass??

No, no, Father, you don't get it. You know very well that the Mass is the perfect backdrop for wannabe celebrities, fame being the new religion. Priest is soooo yesterday. U gotta be a SHOWMAN.
PS Where are all the men?

Father, but you don't understand. See, you get a liberal pastor to front you the money for gas, lunch, parking up to Anaheim. You Park at the Anaheim convention center where this shindig is held. Skip the Mass -- run in, grab a bunch of handouts to take as "proof" you were there.

Walk across the street and enjoy the day at Disneyland. Well, you WENT to the convention, no one said you had to STAY. did this years ago when teaching CCD. Made sure to get a nice Baltimore Catechism elsewhere as a backup for my own CCD kid's instructions. Saw Jean Jadot once at this thing on my way out. Was underwhelmed. Did that some 30 years ago...I'm betting dollars to doughnuts CCD teachers still do this.

Why are they celebrating mass in an open plan office?

Jane has mentioned the SP. On one of the French sites she links to there is mention of the fact that later this month it will be exactly half way through the 'trial period' of 3 years given nearly 18 months ago.

Three goals are mentioned - namely l) to wake up parishes to the Motu Proprio 2) to give hope to those faithful who feel isolated and tell them that they are not alone and 3) to find new ways of helping those who ask for the TLM in their local parish. (Not sure of exact wording for the last one as doing it from memory)

A campaign of leaflets is being planned in France to be distributed before and after Masses with the permission of the Priests. I am wondering whether anything similar is being planned in Britain? I should be very sad if after the 3 years is up our Bishops announce that 'there is little interest in the TLM from the average pew person' due to so many not knowing where they could experience the TLM.

Not everyone is lucky enough to live within reach of a parish where the Priest has been willing to learn the EF. And time is running out.

Pelerin,
I think that seems such a good idea, it would be worth suggesting it to John Medlin at the LMS, or if you are able to get me a leaflet I'll gladly pass it on.

Henry, for real, the education conference has been held in the huge Convention Center in Anaheim. That's partly why everything looks so yutzy. Basically, it's an empty room that's huge that convention staff sets up chairs in and lighting and whatever else.

It's hard enough to do Mass in settings that weren't designed for Mass (although,I thought, the Yankee Stadium Mass for the pope was pretty well executed, all things considered) *but when you're not even trying...."* Feh. and double Feh on Mahoney.

Jane: SP as applied in LA Archdiocese is as follows

1. No Diocesean Priest can say the EF. (At my parish, we have the EF, but a. Our parish is ran by the Carmelites, and b. the priest who offers the EF is a Clertian.)
2. No Parish ran by diocesean priest can have the TLM...see above.

Gem: You're right, that's my plan for next year.

Seeing these abuses makes me want to cry, poor Jesus being consecrated in them.

I don't know whether I'm upset or frustrated or both. One thing I don't get: if abuses like this occur in such a public arena, something so visible and obvious to everyone, why aren't the higher authorities able to do anything about it, or even give big hints in that general direction? It makes me think that the Vatican is not as authoritarian as its enemies make it out to be.

What I can't understand is why Rome can't put a complete stop to all this liturgical experimental chaos!. What kind of Masses are these?. This surely can't be the Roman Rite!. Looks pretty Protestant to me!!. How can this be in the same league (for a better word) than the Tridentine, Divine Liturgies of Sts. Chrysostom and Basil, Ambrosian, even the Pre-Tridentine Masses like, the Sarum Use. How?.

I have printed out the details of the French campaign for you and will pass them on to you tomorrow.

Half way down it says 'To see the leaflet click here' but nothing happened when I did. Perhaps it is not ready yet.

I shall be in Reims the weekend of Palm Sunday and shall try to get hold of a leaflet if they are distributed after Mass there. I shall be meeting up with a friend in Paris on the way back and I shall ask her to get hold of one for me from her parish if I am not given one in Reims.

What I can't understand is why Rome can't put a complete stop to all this liturgical experimental chaos!. What kind of Masses are these?. This surely can't be the Roman Rite!. Looks pretty Protestant to me!!. How can this be in the same league (for a better word) than the Tridentine, Divine Liturgies of Sts. Chrysostom and Basil, Ambrosian, even the Pre-Tridentine Masses like, the Sarum Use. How?

Becket - the Holy See under JP II was not prepared to curb abuses in Los Angeles, Linz, etc. When the late Holy Father did intervene with issuing documents, they were promptly ignored. The bishops knew they could get away because they also knew that Rome would do nothing.

There would be no use in trying now as the authorities in these diocese are so used to doing what they have done, they are unlikely to change now. I remember hearing once from the late Michael Davis, that traditional Catholics in India once appealed in 1999-2000 to Cardinal Arinze to put an end to the blasphemous inculturation that was going on in some dioceses in India. They compiled a dossier with all the evidence necessary. The result?: a deafening silence - which continues to this day.

I'd be grateful for sight of the French leaflet or a link so I can forward to relatives in rural France. It's all holding up your arms during the Pater and kissy-kissy during the sign of peace where they are. Thanks

As the campaign is not scheduled to start until the 14th March, this could be why I failed to get a printed leaflet.

However it is more like I've probably pressed the wrong button so I have e-mailed the 'coordinatrice de cette immense entreprise' and asked whether she could send it by e-mail. When I get a reply I shall pass it on to Fr Ray.