That is not my Mass 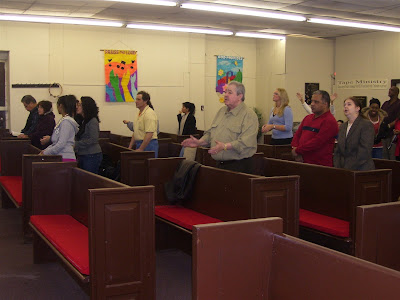 I had a reader telephone me; let’s call her “Mary”, from ....., from a diocese far away. Until 2 months ago her parish had a priest in his fifties, a congregation of 500 with three Masses, two, on a Sunday morning and one Sunday evening. Their parish priest used to say Mass for a neighbouring priest on Saturday evenings, he was in his seventies, he only said the Sunday morning and evening Mass but there were three Masses in his parish too. Two months ago Mary's parish priest, the 50 year old had been moved to take over a much bigger parish, where the parish priest had become too ill to continue.
The Bishop says he has no priests, as he does sickness/holiday supplies himself that is probably right. The seventy year old is running both parishes, but he only feels able to say one Mass in each, so where there were six Masses now there are now only two. Mary’s parish only has a Sunday evening Mass, now rather than 500, coming to Mass, last Sunday there were just over a 150 people who were present in the Church.
The other 350 people have stopped coming to Mass. Mary says the reasons people give are diverse, but mainly the reason seems to stem from “it’s not my Mass”. Often this is faced with other statements such as “the time is too inconvenient”, “I hate the folk music”, “Father, preaches too long", or "isn't that cheerful”, “I hate all those women on the sanctuary”, “I don’t get the chance to exercise my ministry”, “I hate the cantor” "the children can't take part", or even “they don’t need me now there are plenty of people to do my job”. The poor old priest can’t cope and is becoming depressed and I suspect this is being reflected in his preaching, which only exacerbates the situation. How long he will be able to continue is another question.
Mary telephoned me from Ireland but this is a pattern that we are beginning to find all over the British Isles, Masses are cancelled or changed, and there is a deluge of complaints, upset and lapsation. Mass is seen something which belongs to us and that we have a right to, we have lost sight of it being a gift first of all of Christ but also of the Church, and in the last instance of the priest.

And yet some places could have priets if only our reluctant bishops would allow priests from abroad or priests of the new traditional orders to come here.

The bishops won't do that - goodness knows why, but I suspect that in some cases it is because they don't want priests of a traditional type, whether they be FSSP, ICK or priests from Eastern Europe or Africa - many of whom are more traditionally inclined.

One is left with the impression that in some areas the bishop is content to let Mass attendance wither on the vine. It's all very sad, but the recovery will come - of that we should have no doubt. But we need to pray for our bishops and priests, and for more vocations.

Fr Blake: I believe that, in some ways, our people were spoiled in the past.

I can think of one town (population 40,000) where I used to live; it had 5 Catholic churches and some people complained that there was no Mass at the time they wanted. Spoiled. I remember placing prayer cards in the pews before one Mass and dropped a handful. I bent down to rescue them, and when I stood up there was a man standing beside me. When I asked if I could help, he responded "That's my seat." Now, the fact of the matter is, the church (soon to be packed) was almost empty at the time. Spoiled.

Contrast this with a visit to Malawi some years ago. I accompanied the parish priest to an outlying mission station where he had been prevented from celebrating Mass for 6 weeks due to heavy rains. When we arrived the catechist was full of joy and had a young boy ring the bell for almost 30 minutes. Every week, people would walk miles to the church building, not knowing whether or not there would be a Mass - but hoping that "Bambo" had made it through; that day there was great rejoicing! Women danced, children sang and men (well, they did what Malawian men do). Those people appreciate what is provided.

I do believe that people have a right to the Mass; it is the central act of Catholic worship. However, the reality is that there are less priests at the moment. I also believe that God continues to call; sadly, materialism is a powerful force.

By the way, you write that "Mary" is from Eire; I am thus puzzled as to why the attached photograph is of a congregation in the US. Surely, the Irish still go to church :)

Hmm the Irish seemed to manage to keep the Faith fine during the persecutions when there were even less masses than there is now, clearly the problem is not the reduction of masses at all but rather the version of the Faith this generation have been taught.

Basicly it sounds like their faith is self centred rather than God centred.

Perhaps someone should explain to them the novel idea that failure to fulfil your Sunday duty is a mortal sin and they will go to hell.

Of course that may well open another can or worms with questions such as "What is Hell?"

I do believe that people have a right to the Mass; it is the central act of Catholic worship. However, the reality is that there are less priests at the moment. I also believe that God continues to call; sadly, materialism is a powerful force.

Errr... there has always been materialism in the world. It hasn't gone away.

The reason why vocations have been dumbed down is because the priesthood has been emasculated. Priests are now seen as glorified laity who "initiate" the so-called "Eucharistic gathering and sharing". The essence of the priest as an "altar Christus" has been lost and now replaced with that of a social worker, who is all things to all people. Is it any wonder why seminaries in Europe are becoming deserts?

I believe one of the powerful effects of the traditional mass was it's power to call men to the priesthood by the very act itself. It must be one of the reasons why the church was doing well in terms of vocations right throughout the early 60s.

The empty Catholic churches, the grave shortage of vocations: result - empty or near empty seminaries the lack of true catholic Faith, the present crop of bishops of E&W --- all, all the fruits of the Second Vatican Council.

Ottavani: I'm a little tired of blaming lack of priests on "all the laity" who take on other roles.

1) the push of society at large that men who give up sex are either closet homosexuals or there's something else "wrong" with them. i.e. if you're not having sex several times a week you must be emotionally retarded.

2) people having fewer children, on average, and mom and dad "needing grandchildren." Even if they don't realize they may be cutting off a vocation by urging son to produce a family.

3) how about emasculated BISHOPS who don't stand for anything? Would you want a guy like that as your boss? [Personally, I think "obedience" would be hardest to follow - it's not like you can tell the bishop "take this job and shove it" -- though, sadly, many have.]

4) in too many places just enough of the "light in the loafers" crowd are tolerated in the seminary. Would you want these guys as confreres? [An elderly priest I know well, said that in HIS day in the 40s and 50s in the seminary, guys who even seemed remotely like that were tossed out on their backsides before they knew what hit them. "particular friendships" were looked on askance, to say the least.