Pope still enjoys the trust of the masses 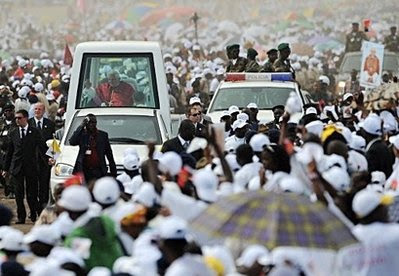 A journalist friend of mine always says, "Ignore the front page, that's a distraction, look for what is really going on". I think there is something in this when it coms to reporting on the Holy Father, attacking him is an easy distraction, especially by politicians. I suspect as the economic crisis worstens there will be more attacks.
Sandro Magister points out despite being rocked by criticism, this pope continues to enjoy the trust of the masses. His trip to Africa and a survey in Italy prove this. The reason is that he speaks of God to a humanity in search of direction

"The Church and the pope speak out on sensitive topics of public and private ethics in an open and direct way. They offer answers that are debatable, and are often debated, contested by the left or by the right. Nonetheless, they offer certainty to an unsure society, in search of points of reference and values. For this reason, 8 out of 10 Italians, among the non-practicers, consider it important to give their children a Catholic education, and enroll them in the hour of religious instruction. For this reason, a very large majority of families, close to 90 percent, choose to direct 0.8 percent of their income taxes to the Catholic Church."

And it is for this same reason – one might add – that Italian prime minister Silvio Berlusconi has not joined in the recent chorus of criticisms against the pope from representatives of France, Germany, Belgium, Spain, etc. On the contrary, he has taken the opposite approach.

On March 21, he said that the Church must be respected, and that its freedom of speech and action must be defended "even when one finds it proclaiming principles and concepts that are difficult and unpopular, far from the fashionable opinions." With this, Berlusconi simply expressed the view shared by many Italians.
Parallel to this read James Kalb on The Tyranny of Liberalism.
at March 28, 2009

It is a product of "Enlightenment" thinking. A good analysis of where this leads - to an extreme of evil - and how it does so - is to be found in A S Byatt's novel "The Babel Tower".

The Weimar Republic > Nazi Germany transition is an excellent illustration of the process and mechanism. We need to watch out. Next week's London riots may - probably will - get out of control and after that things could turn ugly very fast, with an upwelling of reaction against the political correctness and other nonsenses of the past 40 years. And Brown may be gone sooner than anyone is expecting. But do not watch with glee, because no good can come from this.

THIS POPE IS A WONDERFUL FATHER, A FATHER THAT STANDS UP AND IS NOT WILLING TO BACK DONE. HE IS STRONG AND PURE. SADLY THE CATHOLIC CHURCH WILL ALWAYS BE ATTACKED BUT THAT IS A SCAR AND AN ATTACK THAT TRUE CATHOLICS ARE WILING TO TAKE BECAUSE OUR TRUTH AND WONDER AWAITS IN THE END.