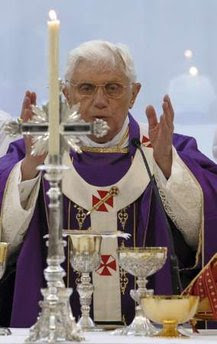 Pope Benedict has addressed to the faithful in the message, made public today, for the 46th World Day of Prayer for Vocations, which will be celebrated next May 3. The theme is "Faith in the divine initiative - the human response."

The priesthood and consecrated life are an "intertwining of love" between divine initiative and free human response, and even if in some parts of the world there is a "worrisome shortage" of people who accept the "call" of God, believers should not lose confidence that He who guides the Church will provide for its needs.

This means keeping alive "in families and in parishes, in movements and in apostolic associations, in religious communities and in all the sectors of diocesan life this appeal to the divine initiative with unceasing prayer."

Since the vocation to the priesthood and consecrated life constitutes "a special gift of God," it is "he, the Lord, who freely chooses persons of every culture and of every age and invites them to follow him according to the mysterious plans of his merciful love."


The "free human response" requires, on the part of those called, "careful listening and prudent discernment, a generous and willing adherence to the divine plan."


It is, the pope says, "acceptance of and identification with the plan that God has for everyone; a response which welcomes the Lord’s loving initiative and becomes, for the one who is called, a binding moral imperative, an offering of thanksgiving to God and a total cooperation with the plan which God carries out in history."

Put in this perspective, "the one who is 'called' voluntarily leaves everything and submits himself to the teaching of the divine Master; hence a fruitful dialogue between God and man begins, a mysterious encounter between the love of the Lord who calls and the freedom of man who responds in love, hearing the words of Jesus echoing in his soul, 'You did not choose me, but I chose you and appointed you that you should go and bear fruit and that your fruit should abide' (Jn 15:16).

"This intertwining of love between the divine initiative and the human response is present also, in a wonderful way, in the vocation to the consecrated life."


"Attracted by him, from the very first centuries of Christianity, many men and women have left families, possessions, material riches and all that is humanly desirable in order to follow Christ generously and live the Gospel without compromise, which had become for them a school of deeply rooted holiness. Today too, many undertake this same demanding journey of evangelical perfection and realise their vocation in the profession of the evangelical counsels. The witness of these our brothers and sisters, in contemplative monasteries, religious institutes and congregations of apostolic life, reminds the people of God of 'that mystery of the Kingdom of God is already at work in history, even as it awaits its full realization in heaven' (Apostolic exhortation Vita Consecrata, 1)."

The awareness that "the call" is "the initiative of God" provides, in Benedict XVI's message, the answer to the question about "who can consider himself worthy to approach the priestly ministry."


The answer "is never patterned after the timid self-interest of the worthless servant who, out of fear, hid the talent entrusted to him in the ground (cf. Mt 25:14-30), but rather expresses itself in a ready adherence to the Lord’s invitation."


"Without in any sense renouncing personal responsibility, the free human response to God thus becomes 'coresponsibility', responsibility in and with Christ, through the action of his Holy Spirit; it becomes communion with the One who makes it possible for us to bear much fruit (cf. Jn 15:5)."


According to the example of Mary's complete trust in the divine initiative, the pope concludes, "do not become discouraged in the face of difficulties and doubts; trust in God and follow Jesus faithfully and you will be witnesses of the joy that flows from intimate union with him."

I'm not sure how old this picture is, or the last picture you have posted of the Holy Father, but I think I have noticed that the Holy Father has been using the older pallium. By older, I mean the one used in the pic and by JPII. I know for a while he was using a different style, that had more ancient roots, correct?

Any reason for the change? Or am I completely wrong on this one.

This picture is from last Sunday, the previous one from his Australian WYD visit last year.
The pallium was changed last year from the one introduced by Mgr Marini at the beginning of the pontificate. Though elegant and of an early design it was impratical and heavy.

I must say I do regret the abandonment of the previous style of pallium. Not only do I think it looked much better (though I recognise that's just a personal opinion), but its greater antiquity and – in particular – its near-identicality to the Eastern omophorion was a powerful bit of symbolism which I know was much appreciated by the Orthodox. That may not be, in itself, a conclusive argument in its favour, but other things being equal (i.e. in the absence of any compelling contrary argument) it should not be overlooked by a papacy which has explicitly set the reconciliation of Eastern and Western Christianity as one of its highest priorities. If it was too heavy, surely it could just be made in a lighter cloth?