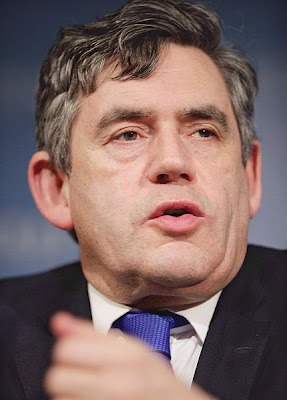 During your recent visit to the Vatican, you kindly briefed me on the Summit taking place in London from 2 to 3 April 2009 with the participation of representatives from the world’s twenty largest economies. As you explained, the aim of this meeting is to coordinate, with urgency, measures necessary to stabilize financial markets and to enable companies and families to weather this period of deep recession, in order to restore sustainable growth in the world economy and to reform and substantially strengthen systems of global governance, in order to ensure that such a crisis is not repeated in the future.

It is my intention with this letter to express to you and to the Heads of State and Heads of Government participating in the Summit the Catholic Church’s appreciation, as well as my own, for the meeting’s noble objectives based on the conviction, shared by all the participating Governments and international organizations, that the way out of the current global crisis can only be reached together, avoiding solutions marked by any nationalistic selfishness or protectionism.

I am writing this message having just returned from Africa, where I had the opportunity to see at first hand the reality of severe poverty and marginalization, which the crisis risks aggravating dramatically. I was also able to witness the extraordinary human resources with which that Continent is blessed and which can be offered to the whole world.

The London Summit, just like the one in Washington in 2008, for practical and pressing reasons is limited to the convocation of those States who represent 90% of the world’s gross production and 80% of world trade. In this framework, sub-Saharan Africa is represented by just one State and some regional organizations. This situation must prompt a profound reflection among the Summit participants, since those whose voice has least force in the political scene are precisely the ones who suffer most from the harmful effects of a crisis for which they do not bear responsibility. Furthermore, in the long run, it is they who have the most potential to contribute to the progress of everyone.

It is necessary, therefore, to turn to the multilateral mechanisms and structures which form part of the United Nations and its associated organizations, in order to hear the voices of all countries and to ensure that measures and steps taken at G20 meetings are supported by all.

At the same time, I would like to note a further reason for the need for reflection at the Summit. Financial crises are triggered when -- partially due to the decline of correct ethical conduct -- those working in the economic sector lose trust in its modes of operating and in its financial systems. Nevertheless, finance, commerce and production systems are contingent human creations which, if they become objects of blind faith, bear within themselves the roots of their own downfall. The only true and solid foundation is faith in the human person. For this reason all the measures proposed to rein in this crisis must seek, ultimately, to offer security to families and stability to workers and, through appropriate regulations and controls, to restore ethics to the financial world.

The current crisis has raised the spectre of the cancellation or drastic reduction of external assistance programmes, especially for Africa and for less developed countries elsewhere. Development aid, including the commercial and financial conditions favourable to less developed countries and the cancellation of the external debt of the poorest and most indebted countries, has not been the cause of the crisis and, out of fundamental justice, must not be its victim.

If a key element of the crisis is a deficit of ethics in economic structures, the same crisis teaches us that ethics is not “external” to the economy but “internal” and that the economy cannot function if it does not bear within it an ethical component.

Accordingly, renewed faith in the human person, which must shape every step towards the solution of the crisis, will be best put into practice through a courageous and generous strengthening of international cooperation, capable of promoting a truly humane and integral development. Positive faith in the human person, and above all faith in the poorest men and women -- of Africa and other regions of the world affected by extreme poverty -- is what is needed if we are truly to come through the crisis once and for all, without turning our back on any region, and if we are definitively to prevent any recurrence of a situation similar to that in which we find ourselves today.

I would also like to add my voice to those of the adherents of various religions and cultures who share the conviction that the elimination of extreme poverty by 2015, to which Leaders at the UN Millennium Summit committed themselves, remains one of the most important tasks of our time.

Right Honourable Prime Minister, I invoke Almighty God’s abundant blessings upon the London Summit and upon all the multilateral meetings currently searching for ways to resolve the financial crisis and I take this opportunity once again to offer you warm greetings and to express my sentiments of esteem.

Thanks for posting this, Father. No point looking at the Bishops Conf website. It ain't there.
What a work of God is this Pope!
How in so few words he gets to the heart of the matter.
Would that world leaders had half his intellect and understanding.

georgem - over recent history it has beconme apparent that 'politicians' and 'intellect' are mutually exclusive terms.