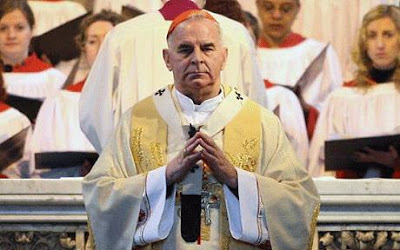 Cardinal O'Brien said: "Like the manic sorcerer whose spells have gone disastrously wrong, our politicians cannot control the urge to cast yet more spells upon the chaos.

"It is an approach that seems to be driven by moral cowardice."

He said that when a toddler is shot with an airgun, the immediate reaction is to regulate the sale of such weapons.

The cardinal added the SNP's alcohol blueprint, which could also see the minimum age for buying drink in shops increased to 18, was focused on "mitigating the effects" of binge drinking rather than dealing with the causes.

He concluded: "When our fellow citizens err and lapse we seldom focus on them or ask why they behaved as they did.

"Rather we rush to impose legal restraints on such action forgetting dangerously that no external restrictions can ever match the effectiveness of self-restraint."

The insistence on tackling the symptoms instead of the causes of Scotland's social problems was predicated on the assumption they are "immutable and unchangeable, he said. 'Moral cowardice' of Holyrood Ministers

Sounds like Vin Nichols condemning the assumption adverts for condoms make about drunk youths having sex on street corners. Wouldn't it be a dream team for Britain if Vin and Keith worked together?
at April 14, 2009

Politicians will not ask the question because they would not like the answer. So we get ever more legislation. But that is inevitable given the decline in self-government.

Yes it would be great if they got the filthy sex education out of their own schools too!

Illnesses require that both the symptoms and underlying causes are treated. I'm surprised that minors under 18 are allowed to purchase alcohol according to Scottish Law. It seems sensible to me that the Scottish Parliament move to bring their country's laws into line with the UK.

These are strong words but to me it lacks a Catholic explanation (fallen nature) and a Catholic solution (grace, sacraments and prayer). Maybe this is in the rest of the homily, but for me our leaders too often leave this bit out. That's the bit we've got to emphasise if we are going to evangelise effectively. We've got the solution but we are not telling anyone. Imagine this as the headline "Cardinal says grace is the solution to broken Britain....", rather than "Cardinal speaks out...". That will get people interested.

I think Vin and Keith will make a great team. The majority of our bishops have been silent and
self- effacing for so long. The Cardinal may be bit short on Catholic explanation, perhaps, but its a start. We must get rid of the idea that the Catholic and Christian voice should not be heard.