CDF to investigate crazy US nuns 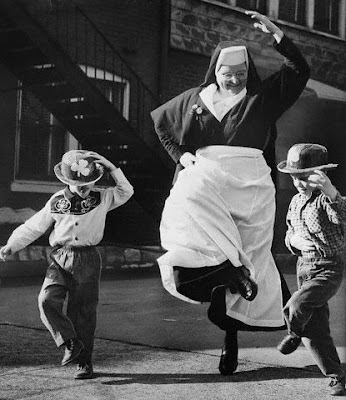 The Congregation for the Doctrine of the Faith has initiated a doctrinal investigation of the largest U.S. women’s religious leadership organization, the Leadership Conference of Women Religious.

I found this on Fr Philip's blog, the keynote address to the Leadership Conference of Religious Women, Sr. Laurie Brink OP. It seems to illustrate the madness of some "post Christian" religious.

The dynamic option for Religious Life, which I am calling, Sojourning, is much more difficult to discuss, since it involves moving beyond the Church, even beyond Jesus. A sojourning congregation is no longer ecclesiastical. It has grown beyond the bounds of institutional religion. Its search for the Holy may have begun rooted in Jesus as the Christ, but deep reflection, study and prayer have opened it up to the spirit of the Holy in all of creation. Religious titles, institutional limitations, ecclesiastical authorities no longer fit this congregation, which in most respects is Post-Christian.

When religious communities embraced the spirit of renewal in the 1970s, they took seriously that the world was no longer the enemy, that a sense of ecumenism required encountering the holy “other,” and that the God of Jesus might well be the God of Moses and the God of Mohammed. The works of Thomas Merton encouraged an exploration of the nexus between Eastern and Western religious practices. The emergence of the women’s movement with is concomitant critique of religion invited women everywhere to use a hermeneutical lens of suspicion when reading the androcentric Scriptures and the texts of the Tradition. With a new lens, women also began to see the divine within nature, the value and importance of the cosmos, and that the emerging new cosmology encouraged their spirituality and fed their souls.

As one sister described it, “I was rooted in the story of Jesus, and it remains at my core, but I’ve also moved beyond Jesus.” The Jesus narrative is not the only or the most important narrative for these women. They still hold up and reverence the values of the Gospel, but they also recognize that these same values are not solely the property of Christianity. Buddhism, Native American spirituality, Judaism, Islam and others hold similar tenets for right behavior within the community, right relationship with the earth and right relationship with the Divine. With these insights come a shattering or freeing realization—depending on where you stand. Jesus is not the only son of God. Salvation is not limited to Christians. Wisdom is found in the traditions of the Church as well as beyond it.

"Moved beyond Jesus?" To whom? Satan? Rest assured the "crazy nun" above would have openned a can of whoop*** on her back in the day when nuns were nuns, and you didn't mess around with them.

I have seen other ‘keynote addresses’ from these conferences in the past and they were in the same vein as Sr. Brink’s. I would say she is ‘on the brink’ of apostasy, but that wouldn’t be true. She’s already over the cliff. The reference to Thomas Merton is indicative. I was a fan of Merton’s from his early writings when he was still in the cloister. But when he began to travel the world and dabble in oriental religions I lost interest in him.

It is instructive that when people start looking outside the Church, they begin to go astray and end up questioning or denying the truths of our Faith. As Chesterton put it: “when people stop believing the big things, they will believe anything”Or even earlier, St. Paul: “For the time will come when they will not endure sound doctrine, but after their own lusts shall they heap to themselves teachers, having itching ears. And they shall turn away their ears from the truth and shall be turned unto fables.”I have little sympathy for these ‘leaders’ and the drivel they spout. It is the ones who are in awe of their ‘learning’ and are led astray by them that concern me – and, apparently, the Vatican as well. And about time too!

Moving beyond Jesus? Moving beyond the LORD OF ALL CREATION. Riiiight. I think the CDF may get a supply of jackets with arms that tie up at the back for these poor apostates. Made of environmentally friendly hemp of course!

This is pseuds corner religion not Catholicism. These nuns have quite obviously lost the plot. Why has it taken so long for anything to be done about this?. Once again our Bishops seem to have been fiddling around while Rome burns.

I read this late last night and was completely baffled. Far too many long words for that hour!

None the wiser this morning really - but amused to see that my Literary Quote for the Day on my Google page is a quote from the American writer Ezra Pound which seems very apt:

'Good writers are those who keep the language efficient. That is to say keep it accurate, keep it clear.'

This address appears to be neither accurate in its teaching nor clear in what it is trying to say.

PS I can't find my hermeneutical lens of suspicion anywhere. Has anyone seen it?

..."I've moved beyond Jesus"..., and these are allegedly Catholic Nuns? Are they teaching in Catholic schools - God forbid.

Keep taking the whacky lala pills and switch out the lights Sisters, goodnight!

The withered branches of the vine must be cut so new growth and new fruit can flourish. Finally, the secuteurs are coming out!

In the immortal words of Charlie Brown: "Good grief!"

And we'll be having none of those nasty androcentric potatoes either.

I have never seen so many heresies squeezed into three little paragraphs. I think I spotted new-age paganism (and its subsets - wicca, animism and pantheism) and indifferentism (with all its little sub-heresies stemming from the acceptance of the doctrines contained in alternatives to Catholicism). And underlying it all - a large helping of post-hormonal solipsism. Anyone spot a heresy I haven't covered?

It’s beyond protestantism, its paganism, ladies step away from the apple tree, you now what happed the last time!

The best lack all conviction whilst the worst is full of passionate intensity. This is the American Church. But this unctuous drivel full of its own sad pride is the sort of bland blamange that will be spewed out of the mouth of the Lord. We must pray that the Holy Spirit does not abandon us in the Church's hour of need.

"Jesus is not the only son of God.
Salvation is not limited to Christians.
Wisdom is found in the traditions of the Church as well as beyond it."

All this is far enough for burning at the stake. All woods organically grown of course.

"Jesus is not the only son of God."

Have to pity them, really.
The lights are on, but nobody's home.

"The Jesus narrative is not the only or the most important narrative for these women."

That's all she needed to say really.