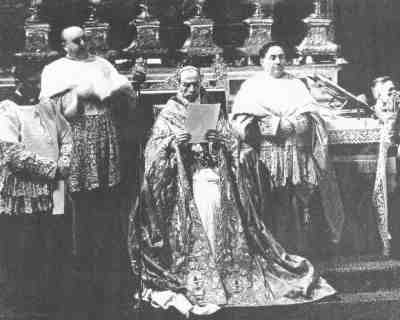 From the Telegraph
Pope Pius XII told senior bishops that should he be arrested by the Nazis, his resignation would become effective immediately, paving the way for a successor, according to documents in the Vatican's Secret Archives.

The bishops would then be expected to flee to a safe country – probably neutral Portugal – where they would re-establish the leadership of the Roman Catholic Church and appoint a new Pontiff.


That Hitler considered kidnapping the Pope has been documented before, but this is the first time that details have emerged of the Vatican's strategy should the Nazis carry out the plan.

"Pius said 'if they want to arrest me they will have to drag me from the Vatican'," said Peter Gumpel, the German Jesuit priest who is in charge of researching whether Pius should be made a saint, and therefore has access to secret Vatican archives.

Pius, who was Pope throughout the war, told his advisers "the person who would leave the under these conditions would not be Pius XII but Eugenio Pacelli" – his name before he was elected Pontiff – thus giving permission for a new Pope to be elected.


"It would have been disastrous if the Church had been left without an authoritative leader," said Father Gumpel.

"Pius wouldn't leave voluntarily. He had been invited repeatedly to go to Portugal or Spain or the United States but he felt he could not leave his diocese under these severe and tragic circumstances." Vatican documents, which still remain secret, are believed to show that Pius was aware of a plan formulated by Hitler in July 1943 to occupy the Vatican and arrest him and his senior cardinals.

On 6 September 1943 – days after Italy signed the September 3 armistice with the Allies and German troops occupied Rome – Pius told key aides that he believed his arrest was imminent.

General Karl Otto Wolff, an SS general, was told to "occupy as soon as possible the Vatican, secure the archives and art treasures and transfer the Pope, together with the Curia so that they cannot fall into the hands of the Allies and exert a political influence."

Hitler ordered the kidnapping, according to historians, because he feared that Pius would further criticise the Nazis' treatment of the Jews.

He was also afraid that the Pontiff's opposition could inspire resistance to the Germans in Italy and other Catholic countries.

Some historians have claimed that General Wolff tipped off the Vatican about the kidnap plans and that he also managed to talk the Fuhrer out of the plot because he believed it would alienate Catholics worldwide.

The latest revelations will be seen by some observers as a further attempt by the Vatican to bolster the case for Pius XII being declared a saint.

Pius has been accused of being anti-Semitic and of harbouring sympathies for the Nazi regime, most notably in the 1999 book Hitler's Pope, by British author John Cornwell.

But other Catholic and Jewish historians contend that in fact Pius was loathed by the Nazis for speaking out about the Holocaust and for behind-the-scenes efforts to save Italian Jews who otherwise would have been sent to death camps.
at April 23, 2009

In my view the whole business of Pope Pius XII being ‘soft’ on Nazism is a case of historical revisionism – brought about by works such as Hochhuth’s “The Deputy” (1963) and Cornwell’s “Hitler’s Pope” (1999).

In the years following WWII, Pope Pius was praised repeatedly – even by prominent Jews – for his opposition to Hitler and for his clandestine work in saving Jews during the war. We will probably never know just how many people were saved through the agency of Pope Pius - by the provision of documents, shelter in convents, monasteries and Catholic homes during the war years.

The book “The Scarlet Pimpernel of the Vatican” (1968) and the movie “The Scarlet and The Black” (1983) based on the book, highlighted the work of Mons. Hugh O’Flaherty in saving thousands in Rome and throughout Italy during the Nazi occupation. But that is just one example.

There is plenty of blame to go around for the rise of Nazism and the appeasement of Hitler by the world powers in the pre-war years. The actions of the British, American and other governments in refusing admission to Jewish refugees immediately following WWII are also reprehensible and not to be forgotten.

That a Pope “with no army” could do so much, with so little, will always be a reflection on those who had so much more - but did less. Anti-Semitism was not confined to Germany in the 1930s and later. And anti-Catholicism is still ‘fair game’ for many today.

John Cornwell's book cover implied that he met hitler when in fact the photo in question was taken in 1927.

Ditto to what GOR said. It really burns me up that Hochhuth's charges gained any credence.

Frankly, I for one, am glad that US Newspapers like the Grey Lady are TANKING. Lying pieces of coprolite which deserved to die off years ago. They can't stand it that there are other sources out there such as the internet and talk radio they can not muzzle.

Excellent article. But not all of this is totally new.

It was reported many years ago that Pope Pius XII announced that if he were kidnapped by Hitler he would automatically resign as Pope.

I suspect that General Wolff was tipped off about this and used this as a further argument to dissuade Hitler.

It is somewhat surprising that the Telegraph regards this as being "..the latest revelations..."; this decision of Pius XII is something that I, and I presume many others, have known for quite a few years.