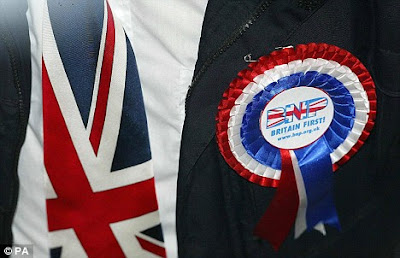 The sinister BNP, if one can describe an extreme right wing party as such, is launching an advertising campaign featuring Our Lord Jesus Christ on the cross and quotes a part of a verse from John's Gospel (John 15:20) in which Jesus says: "If they persecuted me, they will also persecute you".
It presumably follows the C of E's ban on membership of the BNP for its clergy. Ekklessia and other groups point out that whole thrust of Our Lord's teaching was contrary to to bigotry of any kind.
As Catholics we are conscious that narrow nationalism is always the enemy of the Church. Nationalist groups always attempt to hijack the Gospel of Christ, turning his message of that God is the Father of all mankind, and thye brotherhood of mankind into something which excludes people on racial grounds. This is what Hitler did, this is what Pius XI and Pius XII opposed, this is what we must oppose.

Griffin, the BNP leader said: “The British National Party is the only political party which genuinely supports Britain's Christian heritage. It is the only party which will defend our ancient faith and nation from the threat of Islamification.

“What has become of the Christian church in this country? Instead of inclusively ‘embracing all’ which the church claims is its basis, certain groups within that body have banned people from their ranks simply because of their membership in the British National Party.

“Surely if God calls a man to his service, no church has the right to contradict HIS holy will! For many years, the churches in this country scrupulously avoided being politically biased. Nowadays however we see a small number of clerics and bishops openly preaching hatred towards the BNP.

“Church leaders actively shun the word of God on issues like sodomy, abortion and social justice.

“With this in mind I invite you to preview our European election billboard (above) aimed at attracting even more Christian voters.

“Jesus was viewed as a revolutionary figure, hated and hounded to death, not by 'evil men' but by the corrupt hypocrites who ran the church. Has nothing changed in two thousand years?

“On June 4th, the leaders of Britain's churches will find out that millions of good decent people support the British National Party.

“It's not racist to support British jobs for British workers or to be opposed to militant Islam, it's just common sense and in line with the teachings of Jesus Christ.

We need to tread warily with the BNP,this is exactly how the Nazis got into power.Anti Communist,Anti Jew.

When times are hard the morons look around for someone to blame and the blame will always fall on the weakest who cannot defend themselves.

They get all the encouragement they need when they see the thousands of St George's flags during big sporting occasions.

Espousing patriotism is fraudulent nonsense,these people must be totally ignored and no stone must be left unturned in the fight against these NEW AGE NAZIS

The British National Party exists to secure a future for the indigenous peoples of these islands in the North Atlantic which have been our homeland for millennia.

We use the term indigenous to describe the people whose ancestors were the earliest settlers here after the last great Ice Age and which have been complemented by the historic migrations from mainland Europe.

In other words, since both my parents were from the continent and I don't have ancestors in this country since before the Norman Conquest, I'm not indigenous and therefore not British.

I suppose that's gratitude for you.

But, having studied National Socialism as a special subject during my final year as an undergraduate, this BNP hijacking of the persecution verse is something I find rather telling.

Jesus addressed these words to His Church, and so what we are seeing here is a political party speaking as though it assumes the guardianship of the Christian religion as such, which is the exclusive prerogative of the Church herself.

I predict that, what the BNP will end up doing if it hasn't already done so, is to manifest itself - as the Nazi Party did - as a cult of blood and death in which the nation is conceived of as a mystical entity which draws its life from the shed blood of the nation's heroes.

A bizarre mimicry of Christ and His Church.

Such was Nazism and several other gruesome versions of nationalism I could name; such, I suspect, is the British National Party.

If the BNP is supposedly so Christian, why are they so anti-monarchy?

No traditional Catholic can support the BNP with such views.

Sinister is exactly the right word Father. They are a party of the extreme left in all things except their fetish about race. They believe in worker control, nationalisation, a large state, etc., etc.. Even their race fetish is not that much different from what Stalin was doing with the non-Russians in the Soviet Union, What Mengistu did with non-Abbysinians in Ethiopia. They most closely resemble the sort of policies you would find in the Baath Party. Thank God they haven't yet got a Saddam as leader.

This story is remarkable:-

The relationship between Church and state is and always will remain complex. One of the reasons why the church imploded after Vatican II has as much to do with the prevailing political climate in Western Europe and even the USA in the 1960's and 70's as it has with the bizarre axis of Franco-German theologians who came to dominate the post-War era and the Council itself. Our own Cardinal Heenan was baffled by the Raztinger generation and was stunned by the capitulation of the American bishops when faced with them in 1965.

Let us not be under any illusions. If the Church is to revive it will do so on the back of rising political nationalism, in contrast to 1960's anti-nationalism which compounded and complimented the Vatican II crisis.

No idea what this organization is, but I can't see any harm in signing.

Ottaviani, you're missing the point.

I don't know that the BNP is anti-monarchy, but whether they are or not has nothing to do with the question of their Christian credentials. You can be a Christian and a republican - the Swiss and the Venetians were good examples of this when their states were founded.

The point is that a Catholic couldn't support the BNP even if they were monarchists. It follows from their mission statement that they believe that membership of a political society is racially - or at least - ancestrally - determined, and that laws and public powers permitting the naturalisation of people like my father, or determining my nationality as British from birth within the allegiance to the Crown, are intrinsically unjust.

Recusant, I wouldn't count your chickens about the BNP not having a Saddam Hussein. That bunch of boot boys and glue-sniffers is bound to produce one sooner or later.

Of course the BNP are Nazis. They have just had a slight makeover. Their personnel can be traced to a succession of organisations originating with the Nazi British Union of Fascists, led by Oswald Moseley, a buddy of Hitler and Mussolini.

Their support comes from the non-unionised poor white working, and lower middle, classes. These are the people who have been hit hardest by the social and economic changes of the past 30 years, and again since the start of the recession last year.

Since the same people will also be hit hardest by the government's feckless and irresponsible economic policies, no alternative political parties have any convincing policies either, and members of these social groups tend to be lacking in intellectual calibre, we can expect a resurgence in support for old-fashioned National Socialism across the whole of Europe.

There is a worrying parallel between what is going on in British politics and what was going on in the Weimar Republic in the 1920s - decadence, political correctness and fiscal incompetence.

It's an ugly prospect.

Henry, I don't think there's much chance of Europe voting in strength for Nazis.

The reason why there's no chance of a Nazi resurgence is that everyone knows something the Germans didn't know in the 1930s: that a vote for the Nazis is a vote for gas chambers.

We don't have to vote in strength for Nazis,they are already in power here,parking wardens,CCTV watching every move,health& safety interfering everywhere and recycling Moguls filling their boots.

By far the majority of Germans didn't want the Nazis but it was out of their hands the same as here,moronic racists and the garbage press does all the work of the Brownshirts