Inspection and Regulation of Convents 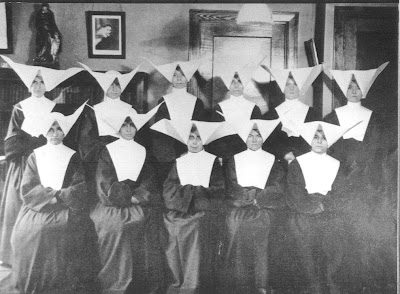 One important issue that caused discomfort to Catholics in the 19th Century was suspicion of Catholic religious houses. There were repeated calls in Parliament for inspection and regulation of convents.

The Religious Houses Bill 1851 would have allowed Justices of the Peace to make inquiries after any woman suspected of being held against her will in a convent.

The Recovery of Personal Liberty Bill 1853 would have compelled the Home Secretary to send JPs and state inspectors to any convent suspected of coercion or false imprisonment, and if necessary apply for a writ of habeas corpus.

Each year motions were brought in Parliament to similar effect. Some asked for a Select Committee to be appointed to investigate convents.

Edward Norman's book on "Anti- Catholicism in Victorian England" gives the background to this extraordinary attitude to convents. Without the justification ,Catholicism was popularly regarded much as Islam is now. The alarmist Protestant underworld of the "Record" newspaper, the Protestant Truth Society, and the alacrity with which Whig politicians regarded the restoration of the hierarchy as "papal aggression", created a climate in which convents and the confessional were regarded with prurient suspicion.

One wonders if this has been entirely dissipated, it certainly lingers on in Northern Ireland.

Thank you for the link, Father

The issue is alluded to in Chapter 7 of Trollope's The Warden:

"Sir Abraham Haphazard was deeply engaged in preparing a bill for the mortification of papists, to be called the "Convent Custody Bill," the purport of which was to enable any Protestant clergyman over fifty years of age to search any nun whom he suspected of being in possession of treasonable papers or Jesuitical symbols; and as there were to be a hundred and thirty-seven clauses in the bill, each clause containing a separate thorn for the side of the papist, and as it was known the bill would be fought inch by inch, by fifty maddened Irishmen, the due construction and adequate dovetailing of it did consume much of Sir Abraham's time. The bill had all its desired effect. Of course it never passed into law; but it so completely divided the ranks of the Irish members, who had bound themselves together to force on the ministry a bill for compelling all men to drink Irish whiskey, and all women to wear Irish poplins, that for the remainder of the session the Great Poplin and Whiskey League was utterly harmless."

I love that picture! Are there still convents with nun wearing habits like that?

AlanF -- of course there are!!! Nuns have nothing better to do than to launder and starch that stuff all day when they're not cleaning the sacristy or ironing the altar linens -- no, no trouble at all!!!! [But only as a treat, if they've already jumped down, turned around and picked a bale of cotton each.] All that extra scut work is good for them anyway. Keeps 'emm off the street and from stealing hubcaps.

AlanF - no, those particular nuns changed their wonderful 'butterfly' headgear many years ago for practical reasons - they had trouble getting in and out of the Paris metro!