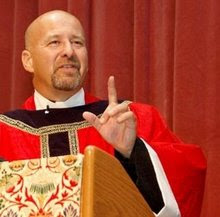 I have taken this directly from Fr Dwight's blog, always useful to reflect on how we are seen from across the pond. I am not one of those rightwing Englishmen who speak of former colonies and "Johnnie Foreigner" but funny chaps those Yanks ...Buster Keaton, don't ya know, hoho!
I thought the Pill was conservative though.
psssst Father, is a Oprah Winfrey a burbon cocktail?
I have numerous American friends of course, plus one or two above the Mexican border!

As UK readers, and American readers of UK blogs will know, The Tablet is a Catholic liberal weekly. It is fondly referred to by those who dislike it's dissenting tone as The Bitter Pill. In short, it is the Catholic journal conservatives love to hate.

Recently the Bitter Pill picked on Fr. Tim Finegan the Hermeneutic of Continuity blogger. In a longer editorial The Tablet have vented their fury on blogging and conservative Catholic bloggers in particular.

Here is my Fr.Z type fisk of the paragraph in question:

Blogs - a corruption of web-log - that the readers have to have 'blog' defined for them is hilarious. Don't be misled. This is not a journalistic attempt at clarity--it is a classic, upper middle class English attempt at a back hand slam. It's an example of English snobbery. See, when you're really upper class you don't even know what such common and vulgar things are. Thus English UCTs (upper class twits) show their snobbery. Example: You mention Oprah Winfrey in conversation and they put on a fake confused look and a John Gielgud accent and say, "What is an Oprah? Is that the same thing as an 'opera'?"were invented in America,the snobbery continues with one of the English literati's stock items: anti-Americanism. Don't you know if it comes from America it comes from the land of nose picking hillbillies who marry their sisters, believe in creationism, tote guns in their pick up trucks and slurp Mountain Dew non stop? "It's from America my dear! How simply ghastly!" where they still thrive, "Goodness me! this funny American thingy called a 'blog' still thrives? You mean it hasn't died out yet? What, those people in America cling to their blogs like they cling to their religion and their guns? How awfully, awfully backward of them!" Isn't it more likely that it is the print media's survival that should surprise us? What? a little weekly magazines with editors and reporters and subscribers? How quaint! You mean the English still do such things? And it still thrives? Not for long. particularly among the political and religious right wing. and there are no left wing blogs? Doesn't anyone ask why right wing talk radio and right wing blogs are a success? It's market forces. People are not getting what they want from the mainstream media, so they look elsewhere. Happily publishing and broadcasting is now totally open. Let the market decide who survives. What feeds the blogosphere's paranoia is a sense of resentment that "they" - those in charge - are engaged in a conspiracy against "us" ordinary folk. Uh. This is a two way street. This article sounds a little bit paranoid to me. Doesn't such a tirade suggest that the writer at the Tablet feels threatened? All those invisible underground bloggers are all against 'us' main stream media types. They must be stopped! The main media is regarded as part of that conspiracy, which is why the internet - cheap, unregulated and with unlimited capacity - has drawn the bloggers to itself. In Britain, too, there are Catholic bloggers, again often right-wing, polemical and vituperative. What!? You mean there are some British people who actually have lowered themselves to write those awful American 'weblog' thingies? How too too horrid? It really is ghastly! Not only British, but even a few English? Dear me, what next? The targets in this case often seem to include The Tablet, in some sort of fantastical conspiracy with the bishops. Generally, blogs are far from an idealised forum for an exchange of intelligent ideas that would be constructive. I love this. Blogs are immediate, allow for readers to comment and exchange opinions with one another at length. This compared to the typical newspaper's letters column--in which editors pick and choose the letters they publish, edit them down and have to limit in time and space all the comments that are made? Anybody can publish a blog and have instant global publishing. This is called freedom of speech. This is somehow inferior to a magazine whose editor is appointed by a rarified, self appointed board of directors in order to consciously promote a particular agenda? Notice too the assumptions in this pompous statement. The blogs are all, by implication stupid and destructive and it is the main media (like the Tablet) who are obviously 'intelligent' and 'constructive'.More often they indulge in straight poison-pen character assassination without reference to any requirements of accuracy or balance. This is simply an untrue slander. To be sure there are some bloggers out there who are pretty nasty, but the vast number of conservative Catholic bloggers are intelligent, charitable, funny and not a few are genuinely scholarly, devout and humble.

What are you thoughts on Catholic blogging v. mainstream Catholic media?

The Tablet is like a road hog-: driving in the middle of the road so no-one can overtake, except now other road users have found the orbital and don't have to sit behind it anymore!

Father, thanks for the info - but would you please stop using red type on black? It's very difficult to read without straining the eyes (or maybe it's just my poor quality monitor!).

In any successful revolution you have to have control over the comunications media, just ask Lenin. In the Church's case the blogs have broken up the liberal monpopoly on news and that's why they are unhappy. It signals the beginning of the end for them (we hope). All we've had for years has just been liberal propaganda - it's their worst nightmare. Countless letters to the Catholic press and Bishops have I'm sure been binned, well not anymore. It's all online in black and white where we can all read it.

Another problem for the liberals is that they can't hit back by opening up their own blogs because then we could debate them and there would be hard evidence that they don't have Catholic beliefs at all or they just don't know what they are talking about. It's a war they cannot win, a war that in many ways they daren't even enter.

Forgot to add last time Fr., thanks to you, Fr. Tim, Fr. Z, Fr. Dwight et al. You are the Bishops we never had. God really does work in mysterious ways. Just in the nick of time He's headed the liberals off at the pass.

Mafeking makes a great point when he says ....

"Another problem for the liberals is that they can't hit back by opening up their own blogs because then we could debate them and there would be hard evidence that they don't have Catholic beliefs at all or they just don't know what they are talking about. It's a war they cannot win, a war that in many ways they daren't even enter".

Can you imagine a liberal Catholic blog??? It's almost an impossible animal to visualise! Haaa ha ha... just how many blog visits do you think they might get??? I would say zillions! ...and they would make hilarious reading. The entertainment value alone would be worth investing time into.

Can you imagine someone seriously defending lets say the liturgical dancers and then there's the pizza sized 'liturgical bread' served up in whicker baskets! Oh boy what a 'meal' we'd make of that!!! Where on earth would they find the scriptural and canonical 'substance' to back-up their whacky ideas.

Come on you liberal tabletistas - DO IT!!!! and let's see your 'house of cards' come tumbling down. You're right mafeking, it would be their worst nightmare and they'd run for the hills or better still - FINALLY REALISE THAT THEY'VE BEEN HAD AND RETURN TO THE HOLY ROMAN CHURCH WITH A THOROUGH EXAMINATION OF CONSCIENCE AND GOOD CONFESSION.