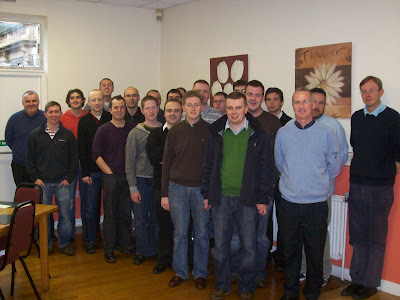 Staff and seminarians of both Scottish Seminaries

BBC Catholic priests will no longer be trained in Scotland after Scottish bishops decided to close the country's only seminary. Scotus College in Bearsden will shut down at the end of the summer and students will transfer to Rome.

There are currently nine students training to be priests in Scotland and 11 at the Scots College in Rome. The Catholic Church said it would reassess the situation if more men came forward to train as priests.

There used to be five Catholic seminaries in Scotland. The Church said priests were needed in the parishes and there were not enough to provide staff for the college as well.

A Catholic Church spokesman said: "It is a matter of regret that the Catholic Church will no longer train priests in Scotland. "The Bishops' Conference is grateful to all those who have contributed to Scotus College over the years including lay employees whose statutory rights will be upheld. He added: "Combining with the Scots College in Rome allows for the creation of a fully resourced national seminary and reduces the demands currently made on priests in Scotland."
at April 02, 2009

And they say we're living in the springtime renewal in the church?

How long, O Lord, will this winter persist?

Not a clerical collar in sight (and I'm thinking more of the staff than the lads) - maybe their move to Rome will knock some pride into their calling...

I was at seminary in Valladolid when they announced the Scots were to close Salamanca. It was the day after the seminary community and ourselves had been over to pray together at the graves of the deceased seminarians. Truly, my heart goes out to the guys at Scotus. I pray for an increase in vocations, of course, but it comes too late for the guys currently in seminary. God bless you all, now and in your future ministry, wherever you may be.

What became of the brave days when there was a secret seminary on an island in Loch Morar - I mentioned it a few months ago?

It is not long ago that the Scots seminary in Salamanca stopped being used to prepare people for the Priesthood, and now Scotus; indeed, a very sad day for Scotland.

David + On the Side: please don't be so quick to make harsh comments; this is a time for prayer rather than making barbs.

If my memory serves me correctly, this photograph was taken during a holiday break when the 2 groups got together; it is not the normal dress code. I can assure you that these young men do have pride in their vocation. As for the problems of those who emerge from the Pontifical Scots College in Rome; they are no different or worse than those of seminarians elsewhere.

Give it to one of the 'traditional societies'; they will fill it soon enough!

"On the side of the angels" Your name could have fooled me. What do you know about the Scots Roman seminary? What do you know of those there or ordained from there? I'll guess at nothing. Unless you have something constructive to say about men giving up their lives for Christ, don't say anything at all.

This is good news for the present students. They have a chance to study some orthodox theology in Rome.

The Scots should never have left Valladolid nor chosen Scotus ahead of Salamanca (Valladolid's replacement).

Most English seminaries are not viable especially Ushaw and Wonersh. The English Church could have made a fortune selling off these places pre-credit crunch, setting up a trust fund and then moving the whole process overseas. Valldolid, VEC and the Beda are enough for our collapsing Church.

It's vanity, delusion and a fear of Roman orthodoxy which keeps dumps like Allen Hall in business. They send their people to the hilarious Heythrop - just check out the website. One clerical collar worn by a vicarette. Beyond satire, beyond satire ...

On the side of angels - having met both current and former students of the Scots College in Rome, I am deeply saddened by your comment. I have nothing but the utmost respect for them on both a personal and priestly level.

Whilst it is a sad occasion for a seminary to close, I have heard little good about Scotus as a whole.

I agree with Sadie - it will give the boys a chance at some Orthodox theology and having a bigger community in Rome I'm sure will be beneficial. It made me smile that the first story in the "related news" section of the article is titled "Catholic priest numbers incease".

The seminarians, especially those entering in September, continue to be in my prayers.

Alban: I'm not so sure it's bad news. I have it from a few sources that Scotus was a dump, pedagogically speaking.

Through the centuries, ups and downs! But never really out! God continue to bless the Scots! Wherever your seminarians are formed, may they continue to be close to Our Dear Mother, Mary, Queen of Scots!! Always be PROUD of your heritage! And, don't give up hope of an eventural Prague Spring! I am a diocesan Priest ministering in Honduras. GOD BLESS SCOTLAND!