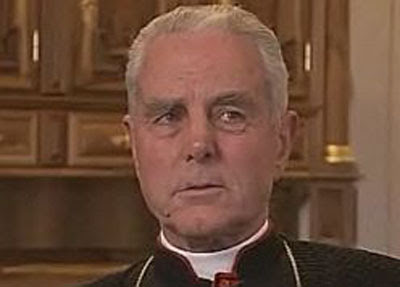 According to Bishop Williamson talks between the Church and the SSPX are to begin shortly. The matter for discussion will not be revealed publicly. It is sad that the Bishop sees the difficulties as irreconcilable. The following is from his blog.


The problem for these discussions is that, objectively speaking, as on either side there may be some reluctance to admit, we are in the presence of an irreconcilable clash between the religion of God and the religion of man. Vatican II mixed the two together, which was too much of the religion of man by half. Let us then say that Benedict XVI wishes to combine Vatican II with Catholic Tradition. That is still too much of the religion of man by a quarter. Let us now suppose that the SSPX and Benedict XVI were to agree to come half-way towards each other. That would still represent one eighth of the religion of man mixed with seven eighths of the religion of God, which for the purposes of Almighty God would still be one eighth too much.
For just as it takes a disproportionately small amount of water mixed with a tank full of gasoline (or petrol) to stop a car engine dead, so it takes only a small admixture of idolatry to stop dead the true religion of God. The Lord God Himself tells us that He is a jealous God (Exod. XX, 5; etc.), and will not endure any false gods beside Him. To anybody in the SSPX who might be tempted to worship with the neo-modernists, as to any neo-modernist who might wish to share worship with the Catholics, the Old Testament prophet Elias would say as he said to the hesitating Israelites, "How long do you halt between the two sides ? If the Lord be God, follow Him: but if Baal, then follow him." Scripture (III Kings, XVIII, 21) then says, "The people did not answer him a word".
Subjectively, the Israelites wanted to have it both ways. Objectively, that was impossible. For ourselves too. Kyrie Eleison.

I hope that the Bishop's pre-judgement on this is as faulty as are his judgements on other issues, as on other issues it might have been better if he he had kept silent.
However I suspect many of the SSPX are committed to Sede Vacantism and an irrevocable break with Peter in favour of an ethereal Rome of their own imagining. PRAY!
at April 19, 2009

Sedevacantism is just another type of Protestantism, surely?

I know this is going to sound silly but he is awfully arrogant. Pope Benedict XVI is opening wide the doors of the Church and Williamson is saying, 'I don't know...it looks nice but I'm not sure about the decor. It needs to be more gothic, then I will come back in.' Meanwhile, true Catholics know that the Church is made of imperfect human beings who took too much acid in the 60s and pray with heart and soul God may be revered more deeply once more. We know the Benedictine project will not happen over night.

Unfortunately, Williamson is like Curti, still saying, 'That's not my Mass."

I have finished watching the BBC's Big Question which slaughtered our Holy Father's reputation. A lot of the anger was directed toward his rehabilitation of Williamson. This wretched man has caused so much damage to the church and doesn't seem to be at all contrite. On another point I hope Archbishop Nichols doesn't take his press secretary, Peter Jennings, to Westminster with him. To say publicly that the Anglican Church "stands for nothing" and "appeals to the lowest common denominator" won't do much for ecumenical dialogue!

I would agree with that Henry.

He also says in the same blog:

"it takes only a small admixture of idolatry to stop dead the true religion of God. "

Hey ho - usually we get accused of idolatry by the likes of Ian Paisley. Perhaps the two extremes of protestantism and williamsonism have travelled so far they have finally met.

I watched the BBC Big Question this morning,a lot of mostly misguided ignorant people.There was a Rabbi who would who didn't understand the word "forgiveness".There was a Lesbian who wanted to be a Bishop,and all sorts who only wanted to hear their own voices.

Very few of them knew what The Holy Father actually stood for.

Lesbian bishop? You are making this up, surely? Or is this a character in a situation comedy? Full marks for imagination.

Well, there are problems. You cannot deny it. He is correct to say that you cannot mix wrong with right in Church teaching. Please God the discussions will bear fruit and we will all be the wiser and surer for them.

+Williamson is like a hamster caught in a wheel. He just won't give up his conspiracy theories. Until he realises the devil is playing tricks on him he's not going to snap out of it. The devil has a plan for everyone and that's his plan for him.

Every organisation has a left, a right and a centre so I just can't believe it when the SSPX deny there are any splits. +Fellay looks to me as if he's got his head screwed on and wants a deal so hopefully something will go through.

St. Peter, pray for the SSPX Bishops and "confirm thy brethren".

P.S. +Williamson, if you are reading this, go outside and get a bucket of cold water, count to 10 and chuck it over yourself. Then repeat after me "the devil is making me look like an a**". He's appealing to your pride, wake up.

Bishop Williamson is absolutely right. Archbishop Lefebvre has been proven right. The Latin Mass has returned and Bishops are still denying many of the faithful to be able to attend it for one reason or another. Before Vatican II, we had one mass and one faith. Now we have two masses and the new church of Vatican II (false religions don't need to convert, jews still waiting on their messiah, interfaith meetings, communion in the hand, etc. St. Pius X warned us against modernism and that's just what took over after Vatican II. Many are in the state of apostasy and have lost the faith and don't even know it.

I agree that the liturgical reforms have done harm but if Lefebre & Co had remained firm on the liturgy but at the same time loyal to Rome, the reform of the reform would probably have occurred much sooner. The Latin Mass would not have become a focus for a certain kind of destructive dissent and division.

It didn't help that members of his movement became associated with sheltering former Nazi war criminals.

Loyalty to the See of Peter is the ultimate test of Catholic faith, which may at times mean putting up with nasty liturgy.