A few weeks ago, before Lent, we had Amelia Shepherd, a young professional photographer take a whole lot of photographs, I think I prefer the black and white one's more than the coloured ones. 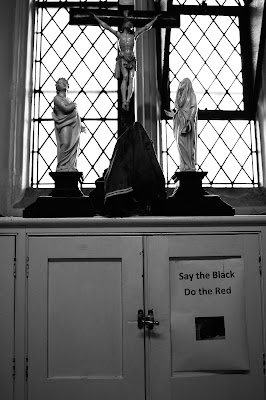 The worldwide influence of Fr Z in our sacristy 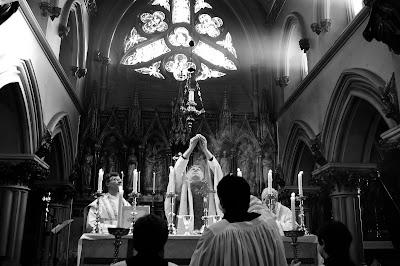 The two other priest are Fr Tim Hunting who was a parishioner here before his ordination, he is Eastbourne now and Fr William Janes who is retired, and concelebrates here on Sundays. 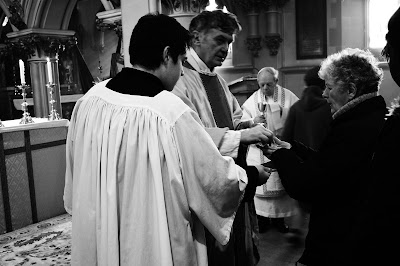 I think we are one of the few parishes which use a communion plate despite its encouragement Sacramentum Caritatis, it is very practical. 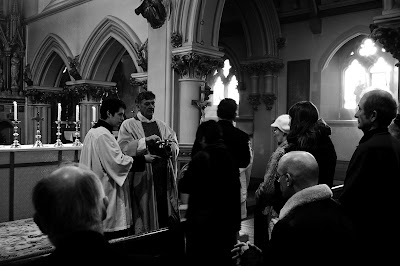 There are an increasing number of our younger people who genuflect before receiving Holy Communion, it catches on with older people too. 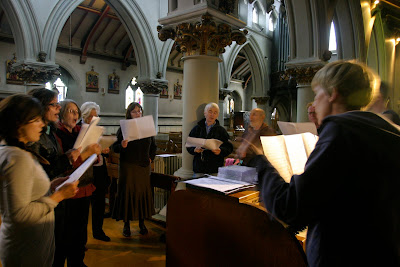 This is our schola, I so pleased with the standard of competence they have reached, they really do practice hard. Slowly their singing is becoming prayerful, and they are becoming quite interested in the Church's musical tradition as an audible expression of its prayer. 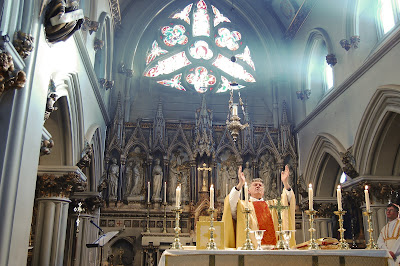 Lifting up our hearts, the chasuble is made by Watts and Co, we always have "the Benedictine arrangement" on the altar and as the General Instruction of the Roman Missal says we vary the number of candles on the altar according to the feast, this is a Sunday Mass. 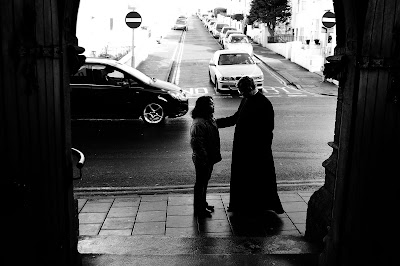 A view out of the church door. 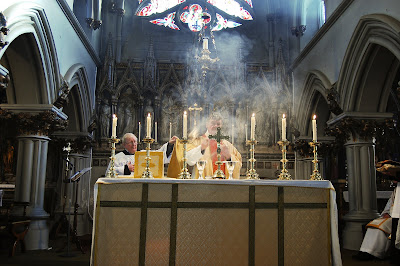 NLM, I have just noticed wanted to see our altar frontal, I am afraid it is homemade, cheap fabric streched on a wooden frame. 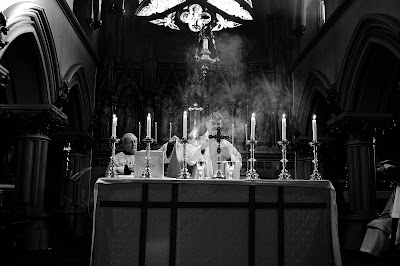 The two following photographs below are from Candlemas in the EF 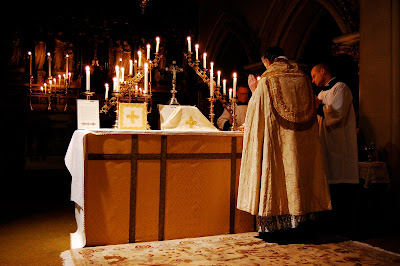 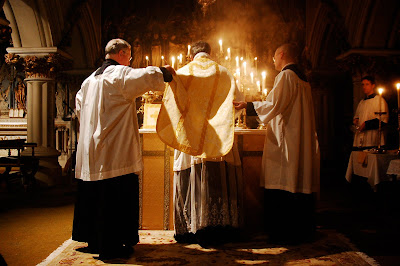 Yes to the black-and-white photos. I agree they are preferable.

I am reminded once again what a lovely old building this is. The parishioners are a lucky lot.

I hope Father will announce a restoration fund soon while I still have access to the internet !

This young lady really has an eye for a good photo these are great.

Genuflexion before receiving appears to be catching on slowly here as well (southern US). Fine with me!

A few years back the USCCB mandated that everyone should make a profound bow before receiving holy communion. We did it faithfully (of course) in the seminary, and I have seen people doing it in some parishes, but honestly, I think that if it ever did catch on here it has now tapered off. Very few people make an act of reverence before receiving; if there is one, it is the genuflexion.

Father,
I wanted to say to you that in the debate over blogging stirred up by the Tablet it is, in my opinion, taking off as it is the means to secure the full teaching of the Church in a time where many water it down or even change it. The average Catholic hears only their parish priests homily and if that isn't faithful they are likely to go astray and perhaps overtime become hardened in dissent - it's what they have been taught. The blogosphere is a wonderful way to provide catachesis, encouragement and correction. I have no doubt that it is true apostolic work and a calling for a good number of our faithful priests in England and Wales. Its fruits will determine its worth. Keep on blogging. Oh and the pictures are great!

Now all there is left to do is to move that altar a bit further back!

(Granted that some parishners will kick up a fuss and *shudder* complain to the Tablet but I gather that would more of an honour than a pain for you Father.)

The average Catholic hears only their parish priests homily and if that isn't faithful they are likely to go astray and perhaps overtime become hardened in dissent:

Here is the dissent you are talking of. Not pretty reading.

Late last year our bishops' commission said that a bow was a suitable gesture of reverence before receiving Holy Communion. Our pp explained this to us that a bow of the head was meant by the instruction. Very few people bother.

The average Catholic here in Australia hears only relativist guff in their Catholic school and they may not hear dissent from the pulpit but if they hear only Catholicism lite they will still go astray. Preaching anything but 'God lurves you' is not the done thing in general.

To be honest I think Black & White photography is just an affectation,colour needs a lot more skill.

I like to see a communion plate. This would encourage communion on the tongue as it will catch any dropped host (and perhaps discourage the use of hands) which is always a worry.

Great pics, and I'm glad to see PEter Wright posting. It occurred to me I hadn't seen him post in a while, and was considering sending out an APB.

This church is magnificent.
I think it would be great to use the amazing high altar for the tridentine mass rather than the new one. Maybe it is a mobile altar and it can be removed? In our parish church of Saint Eugene in Paris, the altar used for the NOM mass was always removed for the celebration of the tridentine on the high altar, without problem for anyone. They have even decided lately to celebrate the NOM masses ad orientem using the high altar: we only have one altar now and it is much better!

Father, we are in a minority. I too use a Communion plate for both EF and OF Masses.