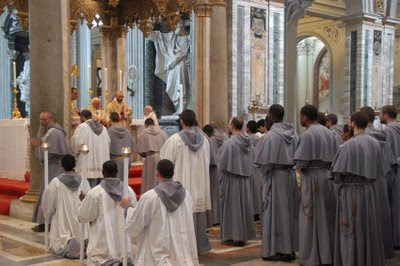 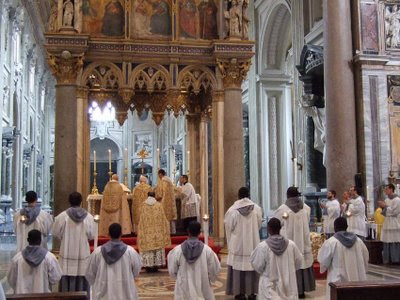 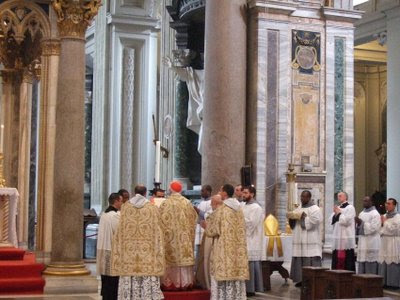 It has happened twice this week, both times with the new Franciscan Friars of the Immaculate in attendance. It is the Traditional Latin Mass celebrated significantly at the Papal Altar, in the Cathedral of City of Rome, the Mother of all Churches. Traditional Rite ordinations have taken place here before, but not at the Papal Altar.

The presence of the FFI is significant, it is only recently that they, one of the new religious orders, expressed a preference for the older form of Mass. Look at the photographs, their are few of them over 40!

More significant though is the celebrant Cardinal Antonio Cañizares Llovera, the new Prefect of the Congregation for Divine Worship and the Discipline of the Sacraments, who recently said:

Communion kneeling signifies respect for God, it is the heart of man which prostrates itself before the One Who loves him unto the end. These are signs, it is not about change for change's sake, it is about looking for the whole meaning and overcoming the secularisation of our world. One of the objectives of our congregations is to realise in these years a great campaign of liturgical formation.

I wonder what he means by the last sentence, something revolutionary or an upgearing of the Benedictine project? 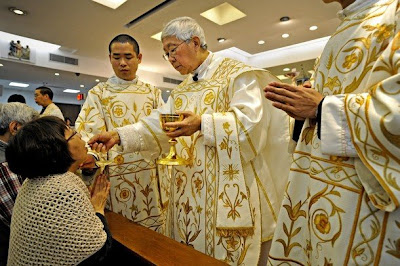 ... also told the many journalists who attended the ceremony that he now wanted to devote part of his retirement life to the faithful who are attached to the traditional liturgy of the Church.>

Why should someone as astute as Cardinal Zen, in one of the biggest growth areas of the Church say such a thing, especially an Asian, one can understand interest in the Latin Liturgy in Europe but in China. Interesting, yes? But then the strange irony is the great expansion of the Catholic Church in the 20th Century was under the Traditional Liturgy.
at April 22, 2009

Wasn't only relatively recent that China adopted the new mass. I believe one of the first priests to celebrate it then in 1988 was a Fr. Zen.

I understand that Cardinal Kung had an affection for the traditional liturgy and used to play an audio tape of a high mass, during his imprisonment in order to console himself.

That protective barrier at the sanctuary step looks like a good idea - otherwise the step is a potential tripping/falling hazard and we wouldn't want anyone to sue the diocese for neglect of Health and Safety, would we, so the bishop ought to be relieved at having one less headache.

And as in incidental bonus it is quite useful to have something to rest on whilst receiving communion in a kneeling position.

With all due respect to the Cardinal he seems awfully parochial. While kneeling is certainly a sign of reverence and respect, he seems to be unaware that standing is equally dignified. I suppose he'd going to tell those "Resurrection people" of the Eastern rite, who always have stood up for Communion that somehow their posture is less respectful? [Indeed, at this time in the liturgical year, the eastern rite folks are "standing aright and in awe" during the whole consecration. In other words, as far as I'm concerned, he can go blow soap bubbles.

Gem, I think he is speaking of the Roman Rite, kneeling only has real importance and significance for us.

Mind, I LIKE altar rails, and I think people should have the option, but I don't like the implication that "his way" is automatically best. I think this is typical amongst the Latin rite. Their numbers are the greatest, so it's like all the other branches of the church aren't as "Catholic" as they are!

The bit I liked in the write up from Paix Liturgique was the hope that Cardinal Zen might visit France 'pour inspirer ses freres eveques!'

Gem - you forget that in the Eastern rites a profound bow is always made before receiving Holy Communion. Not to mention that Russians have a far stricter Eucharistic fasting law - Easter Sunday is always a busy time for the hospitals. So while they may not kneel per se, for Holy Communion, they make up for it in other ways.

And it is highly rash to say a Cardinal should go and blow bubbles when he merely expresses something that is actually correct.

Having just returned from Lourdes I have to report that there are still draconian restrictions on publicising the few Extraordinary Form Masses that are celebrated there.
It is hard but feasible to locate the Sunday Mass but impossible to identify locations or times for weekday Masses.
The resident priest, Fr Byers, will not relay information as to where the weekday Masses will be celebrated as he has been ordered to remain silent.
WHY????
Hardly in the spirit of the Motu Proprio.