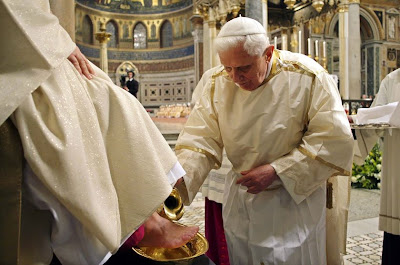 I love this Pope for lots of reasons, here are two, they are paragraphs from his homily on taking possession of the Lateran at the beginning of his Papacy.

..... The Pope is not an absolute monarch whose thoughts and desires are law. On the contrary: the Pope's ministry is a guarantee of obedience to Christ and to his Word. He must not proclaim his own ideas, but rather constantly bind himself and the Church to obedience to God's Word, in the face of every attempt to adapt it or water it down, and every form of opportunism.

The Pope knows that in his important decisions, he is bound to the great community of faith of all times, to the binding interpretations that have developed throughout the Church's pilgrimage. Thus, his power is not being above, but at the service of, the Word of God. It is incumbent upon him to ensure that this Word continues to be present in its greatness and to resound in its purity, so that it is not torn to pieces by continuous changes in usage.

These words, for me ended the period of Ultramontanism that had been plaguing the Church for over a century. During that time we have had wonderful holy Popes who have change the course of history, who have straddled the Church and the world like Colossi. Though part of Divine Providence I am not sure that is normal. The Church is not the Pope's fiefdom, he is above all its servant, Servus Servorum Dei.

The excellent Rorate Caeli, on this the 40th Anniversary of the promulgation of the Missal of Paul VI has an extract from Klaus Gamber's The Reform of the Roman Liturgy in which he asks whether Pope Paul had the authority to change the Missal. Gamber suggests not. Interestingly when Pius IX was asked to change the Good Friday prayer that used the term "Perfidious Jews", the reply was that he did not have the authority to change the liturgy. It is for this reason, I presume, that in Pope Benedict's document Summorum Pontificum, he states that the traditional Mass was "never abrogated".

Gamber is one of those writers who has had a profound impact on Ratzinger, one might conclude that "never abrogated" is as close as Benedict XVI could come to public agreement with Gamber's statement. With this short phrase he placed significant limits on Papal authority.
For this reason, as well as what is says about episcopal/sacerdotal relations, Summorum Pontificum should be seen as one of the most significant documents of the last fifty years.
at April 03, 2009

I believe the story about Pius IX is to do with inserting St. Joseph into the confiteor and canon. When asked whether he could make this change, the pontiff replied, "How can I? I am only the Pope!"

That the pope has no power to overthrow a liturgical rite, based on apostolic tradition, was already well known and accepted.

Much of the 'pro-traditionalist' (note the small 't') arguments for 'reform of the reform' in the celebration of the liturgy is as crassly 'ultamontanist' as anything in the time of Pope Pius IX at the time of the First Vatican Council.

pjsandstrom,
Which particular arguements?
The one's I hear tend to be based on the priority of Tradition.

Surely the argument that tradition is superior to the magisterium is an Orthodox argument. How indeed can tradition be indentified except by some living authority.

As for Popes changing the liturgy, if Emperors can do so , so can Popes. Alcuin, not a Pope or even a Bishop, reformed the Roman Rite at the behest of Charlemagne.