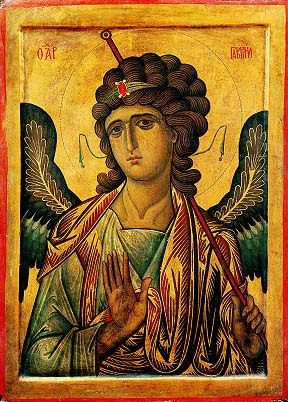 I suspect if a survey was conducted about belief in Angels, most Catholics would have difficulty in distinguishing between Angels an fairies.

Scripture however does believe in Angels, there is a bit of wiggle room, angels could be messengers, either human or thoughts used by God. St John the Baptist, "the Voice", who heralds "the Word" is often portrayed in icons as the winged angel of the desert. There has always been speculation as to whether the Blessed Virgin encountered Gabriel in her heart or in her chamber.

We can understand the great battle in the Apocalypse as a struggle between St Michael and the devil as really being about the struggle between Truth and Falsehood, the Church and the World in that strange cryptic language Apocalyptic language : Michael being the ev - angel, the good messenger, which could be the Church itself,  with sword of the Gospel, sustained by the prayers of the Saints who destroys disbelief, who will eventually triumph. in the Heavenly Liturgy of the worship of the Lamb.

Wiggle as much as we might, Revelation is clear: Angels exist! However their role is to be in the presence of God, their very being is to worship, to cry out: Holy, Holy, Holy! Maybe our modern difficulty with Angels comes from an essential difficulty with worship, with prayer, and ultimately with the notion of beings whose total fulfillment is worship.
at September 29, 2010

A certain priest in a homily here said of St. Michael that some Catholics used to have a prayer to him.

Another said in a homily that angels (and demons) were real but only as psychological conditions or ways of thinking.

What hope is there for the people of Bangor?

There has always been speculation as to whether the Blessed Virgin encountered Gabriel in her heart or in her chamber.

Probably the latter, as she was afraid and had to be reassured... also, when angels appeared in dreams rather than in person, scripture tends to make that clear... St. Joseph's vision, for example...

Stuart Reid of the Catholic Herald points out that the survey of "practising" Catholics for the Independent included people who have a fairly tenuous claim to that designation (going to church once a year or possibly less; I can't remember quite) so the results were rather misleading.

I remember one priest telling me that every time he said the words of consecration to bring Our Lord down on to the altar he immediately envisaged the altar being engulfed in angels to surround their God. He saw them as tiny fireflies darting round continually while the Real Presence was visible on the altar. It evokes a beautiful scene and one which I envisage myself everytime the words of consecration are uttered and the bells rung.

I love the painting by Henry Ossawa Tanner (Paris 1898) of the Annunciation where the Angel Gabriel appears as a shaft of light.

I wonder how many Catholics believe in the existence of extra-terrestials, for which there is no evidence at all for their existence.

"Scripture however does believe in Angels, there is a bit of wiggle room, angels could be messengers, either human or thoughts used by God."

Apart from the claer, inerrant teaching of the Church, there is no "wiggle room" in scripture either. E.g., as St. Gregory points out in yesterday's homily of the 2nd nocturn, the Psalmist says "Qui facit Angelos suos Spiritus", which makes it perfectly clear that Angels are in fact spirits.

Asteroid: Go to an EF Mass for authentic teaching on the truths of the faith. Machynlleth or, a little further, for high days and holidays, Cardigan.

Dr David Jones (Director Anscombe Bioethics Centre, formerly Linacre Centre) gave a wonderful lecture on "Angels as a Guide to Ethics" which was subsequently published in the Pastoral Review and is available here:
http://www.thepastoralreview.org/cgi-bin/archive_db.cgi?priestsppl-00141

He subsequently published a little book on the history of angels, also recommended.

You might be interested to know that in his talk he memorably observed that "Aliens are angels for materialists"!

In Daniel Corkery's short story Rock-of-the-Mass the protagonist is told that wherever a Mass has been said an angel is set on guard for ever and ever, "...that rock must be thick with angels by now."

I have trouble believing that angels are our "guardian dear". Where were the guardian angels of the children who were abused?

Sharon. I think the role of guardian angels is more like a help to the person they are assigned to, to help them avoid personal temptations. I dont think it means keeping off abusers or attacks of any sort.

Gregor, No-one here disputes what Angels are, certainly not me, the question is how they manifest themselves.

One of the problems in scripture is absent of capitalisation. Should we read מלאך or ἄγγελος as "Angel", a non-material heavenly messenger, or "angel", any messenger?
Whether it is messenger of God or a King or a Prophet the word for messenger is generally the same.

Well I tend not to get too technical when it comes to angels. I imagine them in human form as it is hard to imagine them in any other form (we do use anthropomorphisms about God too…). While I believe our Guardian Angels do protect us in many ways, even God doesn’t prevent ‘bad things happening to good people’ and the protection is lifelong - not just when we are children.

But I’ve often wondered what happens to our Guardian Angels when we die? Do they get re-assigned? Or go into an ‘angel pool’ – like the ‘typist pools’ of old? I’ve sometimes said to mine that I hope he gets a better assignment when he’s done with me – or at least a promotion!

Thanks for the advice Richard. Unfortunately to get to Mach in time would involve leaving on the bus on a Saturday afternoon and possibly returning on the Monday!

Instead all I can do is pray for the Priests and people, download homilies, read books and talk with the right people.

It's not necesarily an EF mass that's needed though - I've heard some brilliant homilies at a NO mass and seen some astounding reverence shown by priests from the moment they stepped in the building, through every word of the Mass and until they left again. One young priest who was helping out in a little neighbourhood mass in Crawley when I visited was amazing and really put a fatal wound in any argument that says you don't get the reverence with the NO mass. I was reduced to many tears by his manner throughout. Wonderful.

Fr Clifton, thank you for that clarification.

But I’ve often wondered what happens to our Guardian Angels when we die? Do they get re-assigned?


I'd like to think that I am my Angel's only assignment and that we will be together after I've died.

We used to sing a lovely little hymn at school "Guardian Angel from Heaven so bright, watching beside me to lead me aright . . ".
The only tune I can find on the web is quite dreary and not the bright version we had.
By the way, is it the Feast of the Guardian Angels on October 2?