Blessed Sacrament and the Relic of the True Cross 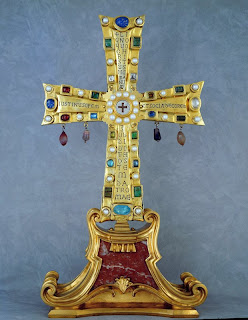 A Relic of the True Cross is supposed to ventreated like the Blessed Sacrament.

When kept in the church or sacristy, if it is not locked away, it should be veiled with red cloth, if it is not veiled those passing before it are supposed to genuflect to it. Interesting that the Vatican Treasury Museum which now exhibits the ancient newly restored relic pictured in the illustration does so in a room that is arranged for veneration, with kneelers and prayer cards are now given to visitors.

When exposed for public veneration the priest brings it to the altar with a humeral veil and uses a humeral veil when blesses the people with it as he would if it were the Blessed Sacrament.

The rite of Benediction with the Relic is more or less the same as with the Blessed Sacrament, admittedly we are supposed to genuflect to the Cross after its exposition on Good Friday but then the Rite goes back Jerusalem and the original Cross would have been the Relic of the True Cross.

The parallel between the Blessed Sacrament and the True Cross makes me wonder whether we actually are venerating is blood spattered wood of the Cross rather than the Cross itself. Is the assumption that every splinter of the Cross was covered with Christ's saving blood, the ancient hymns would suggest this, thus what in reality is being venerated is none other than the Blood of Christ. Thus there is a direct parallel in venerating the Blood of Christ with the Body of Christ, the Blessed Sacrament.
at September 14, 2010

I don't see how even a relic of the True Cross could be given quite the same worship of latria as is given to the Blessed Sacrament.

The Blessed Sacrament is the living substantial Presence of Our Lord with all that He is in both natures. The relic of the True Cross is not.

It seems that was a strong sense of the "Real Presence" in the True Cross (and even in representations of the Cross) in early Syriac Christianity.

According to an Orthodox blogger: "The Orthodox Tradition, as it developed in ancient Syria, had a great devotion to the Cross of Christ. It was believed by the Orthodox in Syria that the Shekinah glory of God, which had once dwelt in the Ark of the Covenant and filled the Temple in Jerusalem, came to reside in the Cross following Christ’s death and resurrection. There was thus a very deep and profound devotion for the Cross (any Cross) within Syrian Orthodox practice".

"I don't see how even a relic of the True Cross could be given quite the same worship of latria as is given to the Blessed Sacrament." (Michael)
Nevertheless, the rite of benediction is almost the same as Benediction of the Blessed Sacrament, except that (as far as I know) the humeral veil is red. The cope used is also red, but of course the cope at Benediction on feast days can be the colour of the day. It is the only relic which is incensed kneeling. The priest always stands to incense relics of saints.

Let me expand on what I said earlier.

The former is a mere substance. The latter is both a substance and an hypostasis.

A substance is a thing or person existing by its own principle, as opposed to an accident, which can exist only in something else.

An hypostasis is a complete substance with its own way of acting.

A living man, cat, horse etc. is an hypostasis. A severed limb is not, though it is a substance.

sorry to disagree Fr, but at benediction the cope should always be white, unless it follows vespers (as part of the same liturgy).

St. Thomas in the Summa Pars III, Q. 25, a. iv, is very clear in stating that latria is to be given to the True Cross. Indeed, in the preceding answer he states, relying upon St. John Damascene quoting St. Basil, that the IMAGE of Christ is to be given latrian devotion too.

Dare I add that the genuflections to the Cross on Good Friday would be a good example of 'lex orandi lex credendi' were it not for the revised Holy Week (Pius XII) having us genuflecting to a candle. Perhaps abusus non tollit usus.

Where does this come from. I have heard this before but never been able to find it in any liturgical book. So please do share your source.

And of course, as someone has also pointed, out, there is also the Good Friday veneration of the cross.

In short, a genuflection is not solely reserved to the Blessed Sacrament within our liturgical tradition.

The Fourth General Council of Constantinople (869-870) decreed that the sacred image of Our Lord must be venerated with the same honour as is given to the book of the Holy Gospels.

It seems that this, the highest honour which can lawfully be given to a thing, is appropriate for whatever has been in contact with Him.

When Saint Helen needed to know which of the crosses she found was the true cross, she had a dead man laid upon them.

When the man came back to life, the cross he had been laid upon was declared the True Cross.

Can two sticks bring a man back to life?

They can if they were the cross Christ was crucified upon.

Saints Peter and Paul would walk past dead men, and their shadows falling upon them would bring the dead back to life.

Can a shadow raise from the dead?

It can if Christ allows it.

Can Holy Water cast out demons?

Would you consider it to be just water, and wash your car with it?

Treat Sacred things with the respect they deserve.

Walk by Faith, not by sight.

I can't remember exactly how many relics of the True Cross there are in the new exhibition in Westminster Cathedral, but there is certainly no facility provided for reverencing them !

Dominic Mary mentions the Relics (including those of the True Cross) which are in a display cabinet in the exhibition at Westminster Cathedral.

I always feel very uncomfortable when relics are displayed in this way as museum pieces. To any non-catholics visiting out of curiosity or interest in the magnificent art of the vestments and chalices, the items in the display cabinet will undoubtedly be in their minds just other items from the past.

To us surely they should be so much more and Dominic Mary's comment on having the facility for reverencing them seems an excellent idea. However there would probably not be enough space there to do this. There is nothing to stop anyone bowing before them....

I always feel very uncomfortable when relics are displayed in this way as museum pieces.

Perelin, I agree whole heartedly with you.

The relics I have are working relics; a piece of the shirt Blessed Miguel Pro was wearing when the American Freemasons murdered him has been divided for use by Nuns, Priests, and a young man the Devil has been trying to kill since he was an infant.

Relics are relics that they may be used in evangelization and as Priests and Religious toil in the vineyard of the Divine Master.

A relic does not last long in my house. They are put to use.

I don't remember where I sent the relics of the great American Stigmata, Father Leo Francis McNamara. Wherever they wound up, may God allow they are being put to good use.