Britain Can Benefit from Benedict 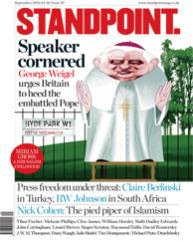 Here is a tiny extract of a George Weigael article "Britain Can Benefit from Benedict" in Standpoint.


The Catholic Church, Benedict XVI believes, can be one of those "creative minorities" in 21st- century Europe and indeed throughout the West. To be that, the Church must regain a clear sense of its own identity, primarily through a resacralisation of its worship. It must recover a firm grasp on the truths it proposes, putting behind it the "liberalism" in religion that John Henry Newman deplored. It must raise up a generation of bishops and priests who are persuasive evangelists and witnesses, according to the model established by John Paul II. It must demonstrate, not so much by argument as by sanctity and beauty, that it offers the men and women of today a path on which they can encounter "that which holds the world together."

And to do all of that, the Church must purge itself of its corruptions, a point on which Pope Benedict has been insistent for years, most recently in regard to the appalling defaults of Irish Catholicism. This will take some time, given the density of clerical culture and the fact that popes are not, pace media distortions, absolute monarchs who can effect massive institutional change at the click of a finger. It will probably take more time than Anglophone cultures will like, given the still-languid, Italianate ways of the Vatican. No one should doubt, however, that Benedict XVI understands that, for the Church to become the "creative minority" of his imagination, it must be a credible minority that lives the truths it proclaims and deals decisively with those in its midst who betray the trust given them.

Sounds like the Swedish model of the Catholic church, though people here complain. It seems pretty active and creative to me.