Cardinal Pell on the "Bitter Pill" 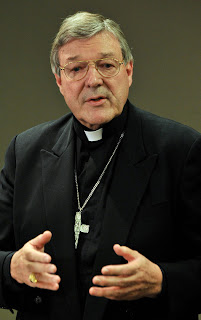 Cardinal Pell wrote an interesting article in the Australian saying that far from bringing equality, contraception has redistributed power away from women.. In it he quotes extensively from Timothy Reicherts First Things article Bitter Pill.
at September 29, 2010

I've long thought contraception was created by men, for men, in order for men to escape responsibility, marriage, fidelity, commmitment and children.

It was 'marketed' well towards women, like abortion, as liberating, but men are the net winners, women the net losers, though, in truth we all lose.

Well done Father to spot this. The Reichet article is well worth reading carefully, there is much in it. Initial observations:
He gives a useful comparison to the fishing business: the incentive to cheat is great for the individual. Look how the regulation on matters such as days at sea and quotas has failed. In coastal waters the solution is simple: to make no fishing areas by using obtacles such as sunken ships that will snag the nets of any trawler. Similarly the possibility of an unexpected pregnancy served as a control mechanism.
Consider also the need for two incomes to buy a house and how that hinders the wife from caring for the children. Meanwhile the wife likes to have a career so that she can survive alone in the case of divorce. Even if confident in marriage the social contacts outside work are reduced as other women work.
Consider also the loss of self esteem of the husband who earns less than the wife.
Perhaps we should reread Brave New World.

Cardinal Pell is not afraid to publish articles such as this.
Somehow I cannot see many other bishops with the same nerve.

JARay ...Somehow I cannot see many other bishops with the same nerve.

Yes it has forced women into work and led to a doubling of house prices within a few years in the late 1960s. It became impossible to buy a family-sized home without two average incomes, which meant that women were forced to work whether they wanted to or not. And then the children went wild.

Without an "acceptable" reason to say no (unwanted pregnancy), there is enormous pressure on girls and women to have sex even if they don't want to. Far from liberating women, the contraceptive pill has opened up a situation where they may face insults or intimidation to concur. This is not as far-fetched as it might seem. All sorts of emotional and psychological pressures were applied pre-pill.
Contraception is the potential for men to sleep around and hang the consequences and conveniently place the blame on women if pregnancy results.
The fact that the numbers of abortions have risen commensurately with the widespread availability of contraception must tell us something. That human nature doesn't change and women, even sub-consciously, will still want to bear the child of the man they love.
There is another, even more sinister aspect to this. With contraception has come the sexual objectification of women and it is not so fanciful to link it with the rise in trafficking of innocent girls and women to be used in the sex industry. With no danger of pregnancy they are a lucrative investment, used 24/7 to service a voracious sexual demand.

Father
This subject deserves much thought. Might I add another consideration?
The Chinese "one child" policy seems to have led to couples preferring to have a boy as their only child. I expect that in terms of the "markets" for sex and marriage that has given the females a stronger bargaining position. Do we have any information about this?
Another observation is UK that national newspapers seem to have columns of "introductions". It may indicate that the old methods of a social season have simply been replaced by new approaches. It might also indicate that there are greater numbers who are having to try harder to meet a companion.
This might help explain why the youth going on pilgrimages to Lourdes or waiting patiently outside Westminster Cathedral were so happy. The Church is providing a valuable service.

Peter, Here's the info you require. As ever, women, if they are allowed to survive, don't have much say.

March 2010
"A new report in the Economist is showing that the continued sex-selection abortion and female-based infanticide is harming China's gender ratio. New technology combined with ancient prejudices are producing communities in Asia with thousands more men than women, it has emerged. Ultrasound scans which can detect the sex of babies have contributed to a massive rise in abortions of female unborn babies in cultures which value males much more highly.
"In China and Northern India, more than 120 boys are now being born for every 100 girls - up from an imbalance of 108 boys to every 100 girls in the 1980s, according to statistics published in The Economist. These rates are biologically impossible without human intervention. In rural areas, this ratio is even higher - in some Chinese provinces the ratio is an unprecedented 130 to 100. According to The Economist, "It is no exaggeration to call this gendercide. Women are missing in their millions - aborted, killed, neglected to death." Statistics from the Chinese Academy of Social Sciences estimate that by 2020, China will have 30-40 million more men aged 19and below than women in the same age group.
"According to The Economist, the crime rate has almost doubled in China during the past 20 years of rising sex ratios, including bride abduction, the trafficking of women rape and prostitution."

Taken from LIFENEWS.COM. The UN is also expressing deep concern.

First, it is prima facie unlikely that the ability of women to control their fertility is harmful to them.

Secondly, if it is, all methods of fertility control are harmful, not just the contraceptive pill. Therefore the Church ought to disapprove of them all - including natural fammily planning.

JRMartyn,
I think the Catholic Church is taking a rather broader view of what benefits humanity rather than one person. One could not possibly say, surely, that the decisions on abortion being made in China and India are conducive to the public good. It certainly isn't if you happen to be a female foetus and it takes discrimination against women to a whole new plain. You've had it before you're born and the likelihood is you won't be born at all.
The Catholic Church does not ban contraception per se. It bans artificial means of contraception. The Church acknowledges that sex is part and parcel of a loving relationship and so allows that the expression of physical love at a stage of a woman's feritility unlikely to produce a result is perfectly okay.

What is happening in China is awful. But I was wondering if the consequences of having more young men than women would support or undermine the thesis in the Reichet article.

His proposition is that, in Western countries, there are fewer women looking for marriage than men so they are willing to strike a poor bargain. In China the statistics are reversed. Do the surviving women gain from their scarcity?

As you report the effect has been somewhat like rationing: a black market for women has arisen with abductions and other crimes.

But those women free to chose their husband might gain from having many suitors.

May I offer an idea? Perhaps with Western women marrying too late to have children they may be more willing to come forward to adopt. There is no shortage of such children and, but for Bliar, the Church would be helping there too.