Commentary on the Mass 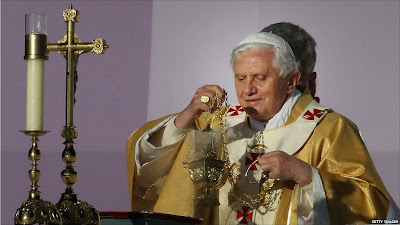 In the Scottish sunshine the Pope arrived at the altar wearing a pontifical dalmatic under his chasuble. The altar had a crucifix on it and a seventh candle, the other candles were on the floor at the side of the altar.
The announcer in a rather comperish style which seemed to break the prayerful mood announced Bishop Conti and  who welcomed the Pope ratherl nicely talking of the saints of Scotland. He was presented with a book on St Ninian and in return gave chalices to Bishop Conti and Cdl O'Brien.
The compere burst in again destroying prayerfulness by asking for it!
The Missa de Angelis was sung unaccompanied rather nicely, then followed James MacMillan's Gloria from his new Mass, there were some majestic passages with lots of brass.
Some lady, I suspect I should know who should was read, in a rather ecclesiastical voice, she might have actress, she seemed to want to interpret the Word of God rather than let it speak for itself.
A pretty little responsorial psalm was sung with a lilting refrain - it sounded a bit dated and bit contrived musically.
There was only one reading, the Alleluia was again a little dated though new to me, a few references in it to show tunes maybe.
The Gospel was sung, the poor deacon had to hunt for the text which had been blown closed during the inensation. Singing it was a nice touch. It would have been a little more interesting had the lectern been on a different level to the altar.
The Pope blessed the faithful with Gospel Book
The Pope spoke of the importance of ecumenism anf of the 3 Universities founded in Scotland by Popes.
In his short sermon he spoke of the evangelisation of culture, of the importance of speaking clearly in the public forum which comes from baptism.
Ninian he said was willing to be a lone voice, and the Scottish saints an inspiration.
He spoke especially to the Bishops and there need to sanctify their priests and to encourage vocations.
He reminded priests to dedicate themselves to God alone to be witnesses in "a luminous way".
"Drugs, drink, sex and pornography", he said to young people are a temptation but Jesus is the real answer, he told them to think of the priesthood and religious life.
Then that compere, a priest, burst in again asking for reflection, there followed a rather empty silence, without his interruption it might have been fuller!

The General Intercessions followed with a sung response.
Again another song accompanied the offertory with another lilting Scots tune, all reminiscent of the Skye Boat song!
There are a only a few chalices and ciboria on the altar which suggests that previously consecrated hosts Holy Communion will be given.
The dialogue is sung in Latin, as is the Preface, the MacMillan's Sanctus twiddles in, it seems strange, it is English, the Pope then returns to Latin, I can't help thinking that it might have better to have had de Angelis, the people might have joined in.
Good to see the torchbearer kneeling before the altar, no elevation to the cardinal points of the compass though, just up and down.
The Pater was in Latin with the Pope clearly singing but not quite with the choir, the rest of the communion is in the vernacular, English not Scots. There was an overdue pause for the Sign of Peace. Then the MacMillan Agnus, I think I like this best, it is very simple but I don't think we will add it to repertoire.
Gosh, you heard every crunch of the Pope consuming the host!
The Pope gave Holy Communion to people kneeling and on the tongue, I wonder if any bishop will follow his example, everyone else receives the Lord standing, there is not even a communion plate used. A man even received Communion from the Pope wearing a hat!!!
A commentator pointed out most of the people attending were young.
The blessing again was in Latin.

Oh no, poor Beethoven, it is ending with a re-orchestrated Ode to Joy, how odd!

Most moving event I have ever seen on TV,impossible to watch without blubbering here & there.

There will be millions out in London on Saturday,hope the weather holds

I am stunned by the crowds who have greeted the Pope, and at the Mass. Good old Scotland! That's something for England to match. Let's hope we can.
One disappointment was the priest commentating upon the Eucharist as the bread and wine which lead us to salvation.
But what a day for the Scots Cathoics to remember.

Father, I'm more than a little disappointed that you appear to be seeking to find fault with everything that is happening during the Mass in Glasgow; indeed, your commentary seems almost sarcastic. I do hope that I am wrong in my observation.

We were amongst those watching the Pope arrive at Holyrood Palace and the crowds were not only very enthusiastic but BBC Scotland reported that there were some 125,000 lining the streets - significantly more than expected. The Queen looked positively radiant and my siblings commented that she seemed genuinely pleased to see the Pope. The papal visit will be much more positively received than some doom-and-gloom Catholic bloggers have been predicting.

We have been spending the day in Edinburgh and the parents are now at friends watching the Mass on television. On Saturday, we will head south to attend the beatification. A singular honour is that mother has been chosen to be amongst those who will receive Communion from the Pope. She is simply beside herself; when she found out, she spent the whole afternoon careering around in her land rover. The gardener said that he thought the cows were going to drop dead from fright! (Can you guess that we are a tad excited?)

Father, I truly hope you will be able to attend the beatification of Cardinal Newman. May God bless and guide His Holiness during his time amongst us.

Parepidemos,
I don't think I am being unnecessarily negative.
Some of the elements of the Mass seemed contrived.
The music was to the taste of the organisers, and possibly to your taste but not to mine.

The crowds at the Mass were apparently 70,000 not 65,000 and the interaction between the Pope and them was marvellous.

I have just finished watching the Mass. Thanks to Fr Finigan's blog I decided to watch it on the Papal Visit site and bliss! No commentary whatsoever so it could all be followed as if one were actually present.

This morning's events were marred for me by the commentary interruptions as I watched it on the BBC. They repeat themselves in order to fill the time. It was ironic when Huw Edwards started saying that it was unusual to hear the private conversations between the Holy Father and the Queen and then proceded to talk over them! If he had kept quiet we would have heard them.

I shall certainly be watching again on the Papal Visit Site. Yes it was beautiful. Your comments Father were excellent. Just one I would like to add - I thought that the very short 'Ite Missa est' was NOT impressive enough to end such a ceremony. More of a 'That's all folks'. The classic one adds so much dignity to all that has gone before.

I don't think you were unjustly negative. I would have said spot-on.

To those who think I'm a hard-hearted liturgist let me say I actually cried at Communion when they sang Soul of my Saviour and I saw the HF distributing Coummunion in the time-hounoured and correct manner, especially to the last but one communicant with cerebral palsy (I think) who if I'm not much mistaken still managed to kneel to receive her Lord and her Saviour. God bless her and the HF.

I nearly cried at other times but for the wrong reasons!

Fr - sorry meant to say. The man who received communion from the Pope was indeed wearing a hat - I thought it was rather glamorous - hehehe!

Although there were some Cardinals, Archbishops and Bishops who whould have had lessons in wearing ecclesiastical headgear - and it wasn't the wind that prevented them from doing so!

Anthony Dickinson mentions the young lady with cerebral palsy who received Communion from the Pope.

I saw her being interviewed on a recent programme (was it perhaps Songs of Praise?) She had been privileged as a very young girl to receive her First Holy Communion from Pope John Paul II during his visit here 28 years ago. She still had her First Communion dress which she proudly showed to the interviewer. A lovely lady with great courage.

Mr Dickinson mentions the chap with the amazing hat - I presume it was a National Costume but from where I do not know. I actually thought Fr Ray was talking about the chap in the woolly hat in the congregation receiving Communion but perhaps I was mistaken.

Pelerin,
I think the national costume was Polish and the chap was a member of the (Scottish) Polish choir who had welcomed Pope John Paul to Glasgow in 1982. Other echoes were the large paten and chalice which had been made for the 1982 Papal Mass in Bellahouston.