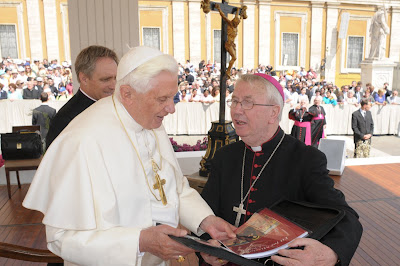 Bishop Patrick O’Donoghue handing the Pope his schools document: Fit for Mission
Today the Pope goes to Twickenham and will take part the Big Assembly, a broadcast to every Catholic school in the country. Presumably he will greeted by Ms Oona Stannard and her deputy former nu-Labour Mr Greg Pope of the Catholic Education Service of England and Wales which proved itself so supine to the previous government's aggressively secular policies.
I hope today will be the day when he calls for the formation of well informed orthodox Catholics who will be able to argue the case for the Church and Christianity in our aggressively secular society, this is after all what Newman called for all his life.

For too long the Church has wasted its resources. Fourteen years of Catholic education rather than giving us committed  young men and women invariably, results in confused young people who not only reject any Catholic sacramental practice but also the Church's doctrine and morals.

Rather than being bastions of Catholic life and living our schools to many committed Catholic parents seem to be the places which undermine the teaching of the Catholic home. Not only do we have a crisis in priestly vocations but also a graver crisis in Catholic educators. Increasingly those in our schools, especially our secondary schools, our teachers have nothing and can give nothing.
at September 17, 2010

My youngest son, yeaterday, whilst watching the concelabrant priests arriving at the park in Glasgow, looked
at me and asked what qualifications were needed to be a priest!!!!!

Amen!
There are times when I wonder if I was so useless. I have been retired some 16 years now but I did genuinely try to teach the Faith when I was teaching.

Just seen the opening commentary before I have to leave. Why did the BBC pick a commentator who knows nothing of Catholicism except the Pope's "conservative views" on contraception, women priests and, yes, the child abuse scandal. The woman is hopelessly out of her depth.
Shame the two putative teachers from the college had not been taught enough to be able to handle the usual questions. Questons they may have to face in future from parents and students.
Still it's a beautiful day!

I can't see the system here changing now that the Pope has affirmed it with these words:

I am pleased to have this opportunity to pay tribute to the outstanding contribution made by religious men and women in this land to the noble task of education. I thank the young people for their fine singing, and I thank Sister Teresa for her words. To her and to all the dedicated men and women who devote their lives to teaching the young, I want to express sentiments of deep appreciation. You form new generations not only in knowledge of the faith, but in every aspect of what it means to live as mature and responsible citizens in today’s world.

He might as well have told them to keep up the good work!

Sometimes, things need spelling out, in this case the fact that our Catholic education system has failed to form children in knowledge of the faith, rather than paying tribute and expressing appreciation!

And as for Catholic Social Teaching - who knows what that is about? In the early 1990s we had a group which studied it, but there have been two further encyclicals since then.

Given the vacuum in thinking within the realm of political economy, we are just about the only show in town and yet no-one is turning up hear what we have to say on this topic.

Stand up for the faith in our Catholic schools and that same institution will act to destroy you with a relentless passion.

Rather than being bastions of Catholic life and living our schools to many committed Catholic parents seem to be the places which undermine the teaching of the Catholic home. Not only do we have a crisis in priestly vocations but also a graver crisis in Catholic educators. Increasingly those in our schools, especially our secondary schools, our teachers have nothing and can give nothing.

You could be talking about Australia except that the everage Catholic home has nothing and can give nothing either because the parents were given ersatz Catholicism when they went to school and there is a deafening silence from the pulpits to anything other than "God lurves you, come as you are" In my archdiocese there isn't one Catholic girls school which teaches authentic Catholicism.