Four Questions About the Papal Visit 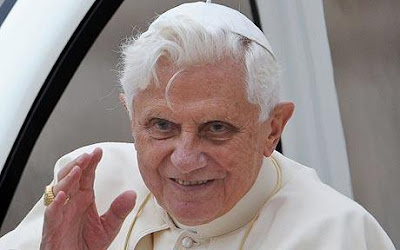 1. Is this the most challenging trip of Benedict's papacy?

2. Overall, what do you expect?
3. Will the sex abuse crisis overshadow the trip?
4. What's Benedict's agenda for the trip?


He puts his remarks in context of the build-up to visit and the nature of the British press:


Press culture in the U.K. is extremely competitive, so when there's no actual news to report it has to be manufactured. Here's a recent case in point vis-à-vis the papal trip: Not long ago, local organizers put out a "pilgrim's guide" for people attending the big events. It included tips on stuff not to bring, such as booze, BBQs, and open flames. Also on the list were musical instruments, which prompted a reporter from the Daily Telegraph to call the bishops' conference to ask: "Does that include the vuvuzela?" (That, of course, is the god-awful horn made famous by the South African World Cup.) The person on the other end of the line said something on the order of, "Well, yes, I suppose it would."

The next-day headline, which predictably became a mini-sensation in "News of the Weird" columns all over the world: "Pope Bans Vuvuzela."

It was great fun, even if each of the three words in that header was misleading. (The pope didn't do anything; this was more of a suggestion than a ban; and nobody specifically nixed vuvuzelas. Though, to be honest, Benedict probably ought to be grateful -- this is one instance in which the media made up something that probably helped his reputation.)

John Allen is right about how the media manufactures stories or slants headlines to give the wrong impression. Of course we’ve known that for some time, but many are taken in. Two other examples I saw recently:

The Irish Independent had a short article entitled “Pope makes out on tickets to events during UK visit” – or words to that effect. It was about the fact that people have to pay for tickets to the functions during the UK Papal visit. The headline gave the impression that the money was going into the Pope’s pocket. While the body of the article didn’t state this, the headline implied it.

The AP had an article entitled “Women’s Ordination Group Descends on Rome”. The title gives the impression that a large group of people were involved (shades of Attila and the Huns perhaps?). How many people were actually involved? Exactly twelve. Again, the headline doesn’t square with the content and the content wasn’t even newsworthy.

Recently there has been quite a bit of discussion about the Vatican PR machine (or lack thereof…). I don’t think it makes much of a difference whether the Vatican has the most adept PR people or not. Certain of the media will always find a way to distort the Pope’s or the Church’s message for their own ends.

Yes the veruvurvas (or whatever they're called) were a bit of a non-story but to be fair there was a bit of preceding history since Archbiship Nichols had said during a press conference around the time of the the world cup that he was worried about them being used during the papal visit events.

ps - there was an interesting piece during thursday's newsnight about the papal visit including interviews with Jack Velero and Lod Patten. Available on bbc iplayer. There's also a list of the tv coverage - quite extensive.

Prayers from here (across the pond) for the upcoming Papal visit.
May the Lord grant many graces; may our Lady protect Pope Benedict XVI.