Against torture and the death penalty, except for those in the Womb 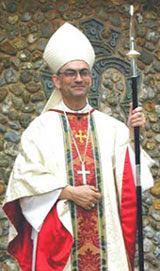 I have always rather admired Bishop Michael Evans of East Anglia, especially his committment to Human Rights. He has always believed the most fundamental right that all human beings have is the right to life. When I was a Deacon in Woking 24 years ago he helped a small group of us set a branch of Amnesty International, he has been a member of Amnesty for over 30 years. I remember as young seminarian standing outside the Soviet Embassy protesting about the imprisonment of dissidents with him.
This morning I heard him on the radio saying that he had resigned from Amnesty, "Amnesty always opposed torture and the death penalty in all cases and under all circumstance", he said and then continued to say now it has made a distinction, being against torture and the death penalty for everyone, except those in the womb.
I felt very sorry for him, especially as this has always been such a passion in his priesthood.
Amnesty was founded by a Catholic, so many Catholics have been involved with it, the candle in a bit of twisted wire was almost irritatingsly ubiquitous in Catholic Churches until recently. Amnesty has taken on Abortion as a right for the victims of rape, so what organisation do we join now, if we are passionately attached to the right to Life, for all people, for those both outside and inside the womb?
I have a friend who was attacked and raped in her her early teens, her non-Catholic parents had the child that she conceived aborted. As she grew older she felt the action taken by her parents, they thought they were doing the best, as an action even worst than the rape.
at August 19, 2007

Listening to the interview, I can't help but feel that not only has Amnesty abandoned neutrality on Abortion it will now actively campaign against the Church as an oppressor of human rights.Jesus word's in todays Gospel could not be more apt.

I used to be a member of Amnesty.
I realised some time ago that they were off on some slope so I pulled out.
My final altercation came over the death of Terri Shiavo when Amnesty told me that it was not discrimination because she was disabled.
I wrote back and asked them to explain to me, a disabled person, why I had less rights than an able bodied person.
I received no reply.
It was hardly a surprise therefore when they decided killing babies was a good idea.

I knew a girl who was raped by a stranger and concieved a child at 18. She kept the child and to see the love she lavished on him was a sight to behold. Indeed I thought keeping the child would be a very difficult thing to do but this mother's example was such a contradiction to this view. I think Amnesty is banking on Catholic apathy - quite literally. Catholics must let Amnesty die because Amnesty has chosen death. As regards what will take its place well, God our Father will always bring forth new shoots when the time is ripe. White Stone, if this is representative of the cesspit into which this group has fallen it is truely shocking and sickening and all Catholics are well shot of them.

Yes Father,they have been infiltrated by heathen and there is nothing they will not do to destroy the Church.We must stand our ground,we cannot lose.
It is not the business of Amnesty to get involved in this sort of thing and if they lose all their funding by this interference then so be it we shall defeat the Heathen.

The fact that Amnesty International has defined abortion in certain circumstances as a “human right” is another example of how the Catholic Church is being pushed into a position which exposes it to legal persecution on the trumped-up charge of “denying basic human rights.”

There is now a clear trend towards ostracizing – and indeed demonizing – Catholicism for its moral teachings as a prelude to a legal clampdown on the Church.

I would not be surprised if the end-game, at least in Europe, is the legal definition of the “right to protection from religious indoctrination” – which would not only put Catholic schools off-limits but also make it illegal to teach the faith to one’s children. The traditional right to freedom of religion will be restricted to adults who opt in, but exclude children who are co-opted in by their parents. (Islam, as an “expression of multi-culturalism,” will be granted an exemption).

We have 15 years at most before this becomes reality.

Francis,
A brilliant explanation of the situation. I have been saying this in a less well defined way for the last few years.
But what should the Church's response be?

The Pope's answer is a positive presentation of the faith and an attack moral relativity and the liberalism that spring from it.

As far as the Church’s response to the threat of legal persecution is concerned, Pope Benedict is doing all he can precisely via the courses of action you describe.

So the main thing the Church can do is to unite behind the Holy Father and learn from him.

Some of our bishops are not helping matters by distancing themselves publicly from what Pope Benedict is seeking to do. But when they are all hauled in front of the law courts in a few years’ time to answer the charge of being leaders in a Church which “infringes basic human rights,” they will find that the only world figure speaking out on their behalf will be the Pope, whether Benedict XVI or his successor.

Only then will they belatedly learn – the hard way – the benefits of being part of the Church of Rome and the importance of being loyal to the Holy See.