A cult had taken over the town 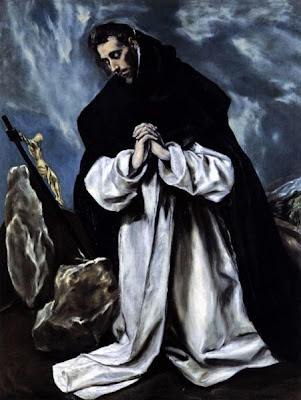 The cult denounced marriage, childbearing, and eating meat. They advocated cohabitation and suicide.

The Church spoke out, but with little effect: partly because the churchmen there lived very comfortable lives that did not seem to resonate with spiritual values.

The Pope sent two special missionaries to do what they could. One was a 30-something priest from Spain.

The two missionaries exhorted the problematic churchmen to embrace again the values of the Gospel. They engaged the cult leaders in vigorous debate.

They made great progress, but there was also a great backlash. Violence and vindictive investigations followed.

In the face of all this, the Spanish priest appealed constantly for peace, healing and forgiveness (while continuing to assert the truths of the faith).

The priest resolved to start his own religious order: focused on strong preaching and Christian austerity. He encountered obstacles, but he also found powerful allies.

Some say that one night the Spanish priest had a dream about a beggar and then met the beggar the very next day. The beggar embraced the priest and said, "You are my companion and must walk with me. If we hold together, no earthly power can withstand us."

The beggar’s name was Francis and he was from the small Italian city of Assisi. The Spanish priest’s name was Dominic de Guzman. The orders that these two men founded would change Christendom forever.

St. Dominic, founder of the Order of Preachers (the Dominicans), died in August 1221, and his memory is celebrated on this day.