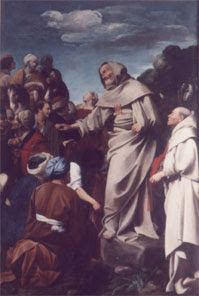 St. Raymond Nonnatus (from Latin non natus - not born) became Master General of the Mercedarians who raised money to ransom slaves from the Muslims, took up the sword to fight for them, or offered their own persons in their stead. St. Raymond, when he exchanged himself for a captive in North Africa was tortured. They spiked his lips and sealed his mouth with a padlock to keep him from preaching or speaking of Christ. He was eventually ransomed. He was named cardinal by Pope Gregory IX but died on his way to Rome at the age of 36.


He was canonized in 1657. He is the patron saint of expectant mothers and midwives because of the nature of his own birth. Although his mother died in labor, Raymond miraculously survived the ordeal. His feast day is August 31.