The dark area onthe first map show the 1933 Nazi vote in Germany, the sencond show the distribution of Catholics in the 1932 census, it clearly shows Catholics didn't vote for Hitler. 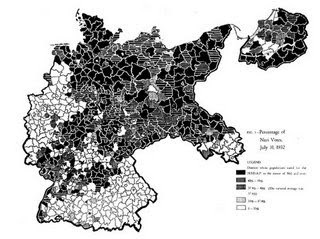 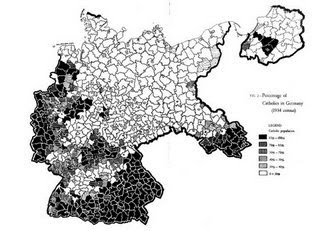 (Zenit.org).- Catholics resisted Nazism during the dictatorship of Adolf Hitler in Germany, and if they didn't do it in a more decisive way, it was because of "a certain inferiority complex."

This is the thesis put forth by Austrian historian Martin Kugler during a conference titled "Sophie Scholl: Catholic Resistance to Nazism." The talk formed part of the 3rd International Film and Family Show, held in Tuesday in Barcelona and organized by CinemaNet.

The event focused on the 2005 German film "Sophie Scholl: The Last Days," which recounts the true story of Scholl, a 21-year-old member of the anti-Nazi, non-violent student group the White Rose.

Kugler is the founder of Europe4Christ.net, a multi-confessional and socio-political movement to fight moral relativism.

The Austrian historian explained that this "Catholic inferiority complex" and "fear" are analogous to the situation of Catholics today.

On the other hand, Kugler explained that Pius XII "loved the German people" and never approved of the Nazi regime.

The historian pointed out that "in 40 out of 44 speeches of Cardinal Eugenio Pacelli -- the future Pius XII -- as nuncio in Germany, there were criticisms of totalitarianism and racism."

"And if it was not more decisive when he was Pope it was because of his concern to not cause a greater persecution of Catholics, given the fact that there had been experiences of this kind," affirmed Kugler.

In light of this, "to say that he was anti-Semitic and in favor of Hitler is ridiculous," he affirmed, saying that the Holy See's diplomacy saved at least 700,000 Jews from the Holocaust during the Second World War.
at August 31, 2007

These maps were published in the St Austin Star some time ago (when I used to get it) and are very interesting.
I recommend Rabbi David Dalin's book "The Myth of Hitler's Pope".

John Cornwell was allowed to write for the Catholic Herald recently-I know he has kind of apologised but he has not withdrawn the book he wrote so I am a but leery.

It may be interesting to look at the Archbishop of Paris's involvement in the deportation of Jews to the French transit camp in Drancy. A fascinating exhibition called "Le temps des rafles" is worth a visit on this very subject.

I wonder if other visitors to this blog are aware of the excellent article by Sister Margherita Marchione on Pius XII in the Catholic Herald (31 August 2007).

It's what I would call necessary reading.

Along with the books she has written on the same subject.

Anonymous,
If you look at the graphs they measure concentrations within bandwidths. No one is foolish enough to suggest that Catholics were not involved in the Nazi project. The evidence shows that relative to the Catholic population Hitler's socialists were alot more popular with Protestants than with Catholics. It is clear to me, even without graphs, that Catholics would find the German socialist movement repulsive. If you have any understanding of Catholic culture you would see that. The purity and hardwork, disicipline, health bla bla would always rankle a stereotypical Catholic and attract a stereotypical Protestant. This is aside from the widespread murder which, neither group really knew about to any great extent until the last days.

I think benfan is missing a point. However badly (at least some) German Catholics behaved subsequently, at the time when Hitler was trying to gain power in Germany they knew exactly what was what.

I am suspicious of those maps. Hamburg and Berlin appear to be Nazi-supporting, which was not the case. Both were industrial cities with substantial working classes organised within trade unions. Hamburg was involved in shipbuilding and marine engineering and Berlin in mechanical and electrical engineering. The people in those places would have had every reason not to support the Nazis.

Right wing groups tend to get their support from small businessmen and tradesmen working on their own account, who were and still are, squeezed by government bureaucrats and get little for the taxes they pay.

These are the social groups from which papers like the Daily Express and Daily Mail draw their readership.

Incidentally, I have no doubt that many British would have made excellent Nazis, given the opportunity. In fact, our own home-grown Nazi party did very well until the Olympia stadium business in 1936.

Henry,
I think you fail to appreciate the near starvation Hamburg experienced and unemployment in other larger cities.

Henry shouldn't be suspicious about the maps. On the first map, the white enclave half way between the Baltic and the Czechoslovakian border, and three-quarters of the way along a line from the Dutch border to the (former) Polish border, is Berlin. The Nazis always faced a strong challenge there from the left.

Hamburg looks like it's shaded lighter than black, and it too wasn't solidly Nazi. Many of the dockworkers were socialists -- although the shopkeeper and ship-owning fraternities were likely more attracted to Hitler.