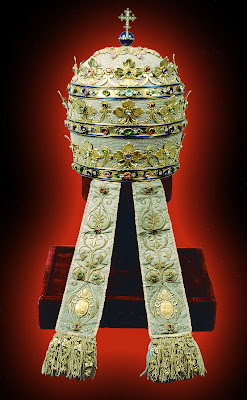 I visited a parishioner, married to a Russian Orthodox today, it was their silver wedding, one of the other guests was a young Russian Priest , glad I wore a cassock, he had just finished studying in Paris. We chatted, he had just read the Holy Father's Jesus of Nazareth, and was very impressed, or at least said, with a smile, "It was very good for a Western Bishop!"

He was glad about the Motu Proprio, "at leat we can identify a common origin", complained about an ecumenical service he had been to in a Catholic Church, last time he was in England, in which he had to sit next to a woman vicar, "a priestess!, who read the Holy Gospel! while we sat!"


We then got back to speaking about the Pope, and he seemed to share my view that he wanted to take the Catholic Church "back to the first milenium, when we were one". Then he asked me, "But why has he abandoned his Crown? Our bishops all wear them! Is he making a veiled criticism?"
Then he went into went into a description of various Episcopal Crowns he had known, his father was a priest but his great grandfather had been a jeweller in St Petersburg in the Faberge workshops.
at August 28, 2007

Funny thing veiled criticism. An Anglican cleric once asked me why our own Catholic bishop didn't wear his proper choir dress at the installation of his Anglican bishop. 'Didn't he think we were worth it?' he said.

I have been puzzling over the Pope's rejection of the title of Patriarch and his not using the Triple Crown on his Coat of Arms. I wonder if "reculer pour mieux sauter" is in his vocabulary.

I am beginning to think that anything is possible with this Pontiff!

I loved when the Popes, donned the big jewel encrusted crown, jumped in the mobile chair to be carried around St Peter's by the footmen with a few ostrich feathers thrown in. Great spectacle. Who got rid of this, it is so dull and dreary now by comparison.

By the way, Russian men (ortho or otherwise) don't do praise very well so consider his statement high praise indeed.

Great to hear you're cassocked, come on Father, lets see a photo. You don't have to pose with a gun, remember you are English. Let me see, I think a stuffed fox would do, or a bowl of lumpy semolena!