A thought on Summorum Pontificum 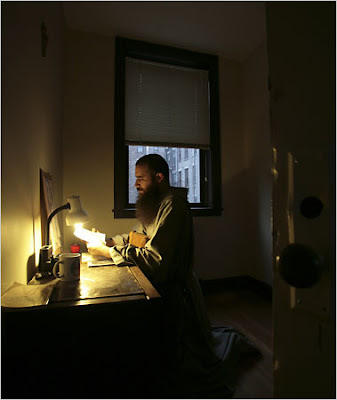 The role of the priest has changed greatly over the last few years.
A great deal of my time is taken up with silly things, drains, bills and things. I was discussing the Divine Office with a friend who is very much into the old and other western rites. He told me that before the liturgical reforms of Pius X a priest would say more or less a quarter of the Psalter on a Sunday morning before he could celebrate Mass, then of course the whole of the Psalter was said in a week. In 19th Century novels the priest was forever saying his Breviary. Nowadays in the modern Office, the Psalter is said over four weeks and a priest will say fifteen psalms and canticles, a few chunks of scripture during the day, I must admit some of us find even that quite onerous.
In the great monasteries of the middle ages, choir monks spent most of the day in the choir stalls. At Cluny manual work for choir monks was reduced to polishing their own shoes, so great was the time spent in prayer. To ensure that monks got some time for sleep and spiritual reading there seemed to be a sort of shift system.
On top of the Divine Office for secular priests were other prayer obligations as well as meditation and the Rosary.
Against this background of prayer was the constant discipline of fasting, from midnight until the last Mass of the day, and other corporal penances.

I am told the Emperor Joseph, the one who insisted on reusable coffins, and durable leather vestments, stopped parish priests in Austria publically, celebrating Vespers and devotions because they stopped priests “getting on with something useful”. Normally when priests weren’t praying they were teaching or celebrating the other sacraments.
The norm seems to have been that priests were essentially men of prayer. I think I would still want to be thought of as that but the truth is that I am an administrator, a manager. One of the things that the Holy Father’s recent document allows is for a priest or presumable others who have an obligation to celebrate the Divine Office to be able to use the earlier form of the Office which whilst not quite as demanding as the Office even of Pius X still makes greater demands on the priests time.

I suspect that one of the purposes of Summorum Pontificum is to get us re-examining where the Church has ended up forty-five years after the Vatican Council. A none UK bishop who left a long comment on the blog and asked me not publish it suggested that Summorum Pontificum was like a crosiers shoved into the machinery of the Spirit of (some might say poltergeist of) Vatican II. Benedict above is calling us to develop a friendship with Christ. Prayer and time spent in prayer is essential for that.
The big question is we know that the prayer regimes of the past produced saints ( and I admit some religious neurotics), will the new order do the same?
Posted by Fr Ray Blake

i just happened to notice Fr Paul Chavasse 'saying his prayers' in a pew after Mass & Benediction...wonderful to observe as a lay person..

Father, it's not correct to say that the full psalter was said in a week. All 1st class feasts revert to the Sunday psalms. I have a very interesting little book called "The Priest's Prayer Book" which offers extra meditations on the Sunday Psalms, since those were the ones said on, I'd say, about about half the days of the year. It would be a rare week without a 1st class feast. Which is theoretically problematic and one of the reasons why attempts at breviary reform have been periodically tried and usually found to be inadequate, given that there is enough material in the Sunday office alone for a lifetime of meditation, contemplation, cogitation, and oration.

Hebdom.
The theory was that the whole Psalter was recited in a week, but as you point out, the whole psalter ended up by not being recited.
Now in theory the whole psalter is recited over a four week cycle, but in practice some of the psalms are shortened, "difficult" bits left out and the same happens in the novus ordo, as in the vetus ordo, feast days take presidence. I didn't want to be pedantic.
The book you refer to, if it is the one I am think of refers to the Breviary of St Pius X, who tended, "... to do all the wrong things, as far as the liturgy was concerned, for the right reasons".