Archbishop Peter Amigo in 1936 at the opening of St Thomas Moore, Seaford. 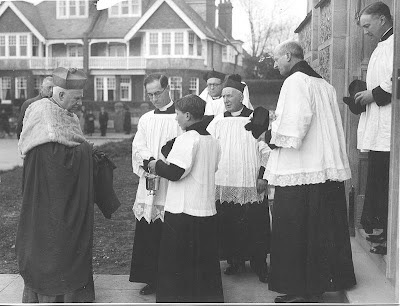 There is a new blog, by Fr Michael Clifton, a retired priest of the Southwark Diocese, it is really quite amusing. I barely know him, he is just a little ascerbic which is I think part of the fun of his blog, his blog is called Fr Mildew, which says alot about him. So far it is really about him, but he is going to start talking about his work as archivist of the Southwark Diocese. He wrote a book about the extra-ordinary Archbishop Peter Amigo who reigned for the first half of the twentieth century over south Lond and much southeastern England.


As a taster, here is a quizz from the blog:-

Name the last 3 ~Archbishops of Canterbury who were ordained as Catholic Bishops before Queen Elizabeth got to work.
Which Catholic Archbishop of Westminster was married ?
3 Which Catholic Bishop acted as confessor and confidant of Cardinal Manning (He was a religious and a fellow Harrovian.)
4) Which Catholic Archbishop in the19th century was imprisoned for one week.
5) In the hymn "Lead kindly light" Cardinal Newman refers to "Angel faces which he has lost awhile"What does that refer to.
6 a Who was certainly the last king of England to die in England as a Catholic
b Who was possibly the last king of England to die a Catholic in England.
7 Name either of the 2 knights of Malta who are beatified English Martyrs.
8 Who was the first Catholic to take his seat in the House of Commons after the passing of Catholic Emancipation in 1829 ? it was NOT O Connell.
9) Who was Prime Minister when this act was passed ?
10) Who wrote a famous letter "From the Flaminian Gate" which upset the English government