Saint John Vianney: Pray for us

Today is the feast of the Cure d'Ars, the patron of parish priests.
I have been reflecting recently on what being a secular or diocesan priset really is all about. Increasingly in my diocese priests are running two or three parishes, not just churches but parishes, with all the structures that a parish has: Parish Councils, Finance Committees, Child Protection Officers, First Communion and Confirmation groups, Building Maintainece Groups and so forth. I have noticed that priests in this situation just seem to stop enjoying being priests and morale in the diocese seems to plummet. They seem to turn in on themselves becoming depressed, maybe drinking a little more than they would normally, or is wise, cut themselves off from friends. It is not healthy, our former Bishop, now the Archbishop of Westminster, used to say, "No-one ever died of hard work" and that is true but recently he also said in the Spectator that he had no time even to say the Rosary, in a way he illustrates the problem. 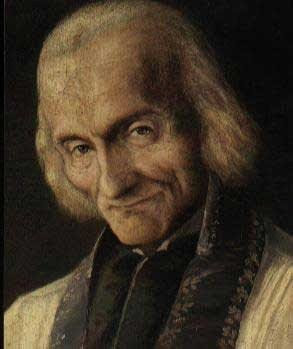 What is a priest for? I think it was St John Chrysostom who said, his primary role is "to offer the Sacrifice and when he is not offering it, he should be preparing it". By preparing it he means preparing himself and preparing his people, by prayer, by teaching. In the life of the Cure d'Ars we see exemplar of this, Mass was at the heart of his life and when not celebrating it, preparing for it and giving thanks after it he was hearing confessions and preparing people for it, for him most of his day was spent in the box, and when he wasn't doing that he was catechising and teaching.
It is very easy for a Priest, a Bishop, even a Cardinal to fill their lives with pretty useless things, things we think are important, like the drains, but the truth of the matter is it is Christ alone that is important, if there is no time to pray, to say the Rosary, then you have to stop doing other things, they are not as important, if they don't get done, they don't get done.
St John of Ars was above all a man of prayer, "he cannot give what he does not have", acquiring that spirit of closeness to Christ, or discipleship, which can only be acquired on one's knees is far more important than anything else for a priest.
Not only is today his feast day, it is Gay Pride Day in Brighton spare us all a prayer and ask his intercession.
at August 04, 2007

Gay Pride Day in Brighton !
Well, we must hope it rains on them.
Rorate coeli, as they say.

It's very sad to think of all the duties a diocesan priest has to assume these days : I understand the need for preparation for First Communions, etc.
But are there no catechists ?
And what a pity lay people don't take responsibility for building maintenance, finance, etc.
One man can't do everything : not without detriment to his spiritual life and even his physical health.
Bishops, of course, seem to like committees ...

No time to say a rosary??? When a Bishop cannot find 15 minutes in a day to pray, then he's got his priorities wrong.

If he lets the prayer life go, the apostolic work will fail as sure as God made little green apples...

We had a lovely Mass on this special Feast Day. i especially remembered my Parish Priest.Of course i live in a Parish that has 5 Priests & one in training (the Birmingham Oratory) so things are a little different here.i think the important thing for us parishioners to be friends with our Priests but always remaining aware of their separation from the laity. Incidentally i just remembered i gave my PP a battered picture of St John Vianney a few weeks back..

On another note i just remembered also to pray for my children's examinations since the Cure of Ars had such difficulty with his.

Happy Feast Day to you Fr & special prayers for that intention.

"No-one ever died of hard work" is, like most of these old saws, absolutely untrue.

Mac Maclernon is quite right. There's no such thing as "not having enough time" for prayer. You can say the Rosary or any other prayer in the bath, in your car, taking the train, in a supermarket, boiling the kettle or going to the toilet.

John F Kennedy, when asked how he managed to cram so much into his daily routine, is said to have replied, "Make time your tool and not your enemy." This applies to prayer just like everything else.