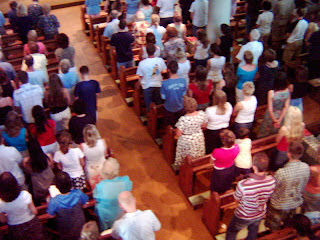 The Latin Mass Society is running a course on the Mass of the Blessed John XIII for priest ordained less than 10 years ago, see here, a few of us older (how that hurts) priests decided we would organise something ourselves with a priest who was formerly a member of the FSSP. I know some will celebrate the older form of the Mass and others just want to understand what all the fuss is about and use the Extra-Ordinary, as the Holy Father intends, to enrich their celebration of the Ordinary celebrations. Very little has been finalised, but if you are a priest who doesn't qualify for the Merton College gathering leave your contact details one way or another.

I had dinner with a couple of older priests, heading towards retirement, who were both ordained and celebrated Mass according to the older form, they both said that they were looking forward to being able to do so again. It surprised me a bit as both are not quite known for their ars celebrandum, one said, "I simply want to do what is in the mind of the Church". The other just spoke of the nostalgia that he had for the missal that had fostered his faith and born fruit in the holiness of the men and woman of his youth and was the inspiration for his vocation, I was very moved by what he said.
at August 01, 2007

Whenever I hear the phrase 'the mind of the Church' my teeth go on edge. For years I've seen churches wrecked, fine vestments mutilated and thrown out, liturgies dismembered, awful music introduced, dreadful courses and projects recommended under the pretext of following the mind of the Church. I have no doubt that those who acted so believed that they were expressing it. But the Church appears to have changed its mind once again and now the opposite is being recommended by some with the same insistence. Wouldn't it be better tacticts to say that you are trying to follow the authority of the Church? The Motu Proprio authorizes these changes. What we shall have next is the 'spirit of Benedict XVI' as, in the past, we had the 'spirit of John XXIII' before it became the 'spirit of Vatican II'. Confound these spirits. The authority, rather than the mind, of the Church has, in my opinion, a more convincing ring and is less open to misunderstanding and abuse.

I approached my priest about having a Classical form mass. He said "we are going to be concentrating on the vernacular". I got the impression that there was a total lack of interest and not only on his part ("we"). I also wondered who the "we" was, as it doesn't obviously include me nor the Pope nor those faithful to papal authority. I am now left with the dillema of diocese hopping or appealing to higher authority. It is all so annoying. As maecella says, I wish our clergy would follow the authority of the church. To think for one second that the faithful would disobey Peter to follow their own Bishop is a laugh. How dare they behave with such lack of respect for authority and thing the faithful will respect theirs. Not this time round I'm afraid.

Ms Lefebvre, Is right, I don't know if she is a relative of the late Abp of that name but he illustrated the dilema of trying to decide for himself what was the Church's mind, but for most of us it is simply following Peter.

Benfan, I would wait and see what happens after 14 Sept, so many young priests seem to want to celebrate both rites and do them well.

I sympathise with the comment of Marcella Lefebvre.
I really do.

But I cannot equate the false "spirit of Vatican II" with the mind of the Church.

The authority of the Church ?
Well now.
Which Vatican II document authorised the wrecking of fine churches ? The mutilation of vestments ? Awful music ? etc., etc.

I doubt that the people who did these dreadful things had ever read one document from Vatican II in their lives.

The spirit of the 1960s and 1970s was :
"Out with everything old. In with anything new."
It was the spirit of town planners. (Look at the damage they did !)
It was the spirit of the creative arts : art, architecture, music, design, etc.
It was the spirit of the times : morally, sociologically, philosophically, throughout the western world.
We are still living with the consequences of this spirit now.
We have lived through, and are living in, an age of nihilism and materialism.
And you can see how destructive it has been.
But I don't see how we can blame all that on Vatican II !

The Catholic Church was not invented in the 1960s.
To follow the mind of the Church is to be loyal to twenty centuries of Tradition, of teaching, of witness, of martyrdom, of prayer : down all those centuries, right back to the days of the blessed apostles themselves.
And the Church did not end in the 1960s.

Pope Benedict is encouraging us to reclaim our spiritual heritage from those who have tried to snatch it way.

Hence his denunciation of the "hermeneutic of rupture" in his speech to the Roman Curia in December 2006.
He condemns as false the interpretation of Vatican II as a revolutionary movement : as a break with the past : a rupture of the Church before and after the Council.

That is why it is good to seek to follow the mind of the Church, regardless of the spirit of the times.
Deaf to the siren voices around you.
Paying no heed to their cries :
"You are not following the spirit of Vatican II !!
"You are tring to turn back the clock !!
This is not 1962 !!"

Cliches. Tired, worn out old cliches.
Yet it still requires courage to ignore them, and to hold to what is right : what is the teaching the Church : what is the mind of the Church.

I salute the priests who wish to return to the celebration of Mass according to the 1962 Missal, who wish to follow the mind of the Church.
They are right.
The Pope has just said so.

Whom do we, the ordinary people, follow in order to discern the mind of the Church ?

Well, that depends.
Think carefully before you act. Pray.
But if in doubt, and if necessary, follow not your local priest, or even your local bishop, but the Pope.

BTW, I hope the plan of Fr. Ray and some of his colleagues for "higher education" works out O.K.

Apologies for the anonymous but blogger will not let me log in. I think the training is being offered for priests ordained within the last ten years not just within the last year, see first paragraph of press release. Kind regards, Michael.

Sorry that was a typo, which i have corrected.

Doc Wright ~ I wouldn't get fixated on the "60's" and "70's". Much of the wreckification took place after 1980. The rate at which people lapsed after 1980 increased, to name but one example.

This was in the face of JPII pontificate who, when he was not being mocked or ridiculed, was simply ignored.

Bishop Crowley was still ordering the wrecking of Churches in his diocese up until recently - this despite resistance from the laity. Some of these men are consumed with hatred for the Church. Any person who resists them is dismissed as having "issues" - one of their many poisonous put downs.