Pope, the goal of every pilgrimage is heaven 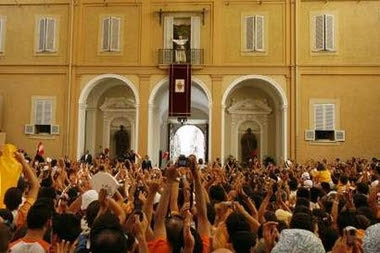 The voice of sanity, the Pope said:
In his Angelus today Benedict XVI invites the faithful to "detach themselves from material goods" and undertake "a journey towards the heavenly heights". He also turns his thoughts to the numerous victims of the floods in South Asia, urging the Christian community to lend their "prayers and concrete help".
Castel Gandolfo (AsiaNews) – The goal of every pilgrimage is the city of "solid foundations", whose architect and builder is "God": a goal that is not of this world, but of "heaven". During his Angelus address from the courtyard of the Apostolic Palace of Castel Gandolfo, Pope Benedict XVI recalled that the "early Christian community" was fully aware of this fact, considering themselves to be "custodians here on earth" identifying their presence in cities as "parishes" a Greek word meaning "colony of foreigners".
The Pontiff's reflections on the liturgy look towards the future inviting Christians to once again, "detach themselves from material goods, which are for the most part illusory" and to undertake a journey towards the "heavenly heights", ready to welcome the Lord when he will "come again in all His glory". "The early Christians - contined the Pope - expressed a most important characteristic of the Church, which is of course attention to all that comes from on high, to the life that is to come, which we repeat each time we pray the Credo when we profess our faith". He also invited the faithful to live in a life of "wisedom and providence", carefully considering their Christian "destiny" and its' final realities : "Death, the last judgement, eternity, Hell and Heaven".
Sunday's liturgy is also an invitation to prepare for the feast of the Assumption which is celebrated on August 15th. A feast "completey orientated towards the future, towards Heaven, where the Blessed Virgin "went before us 'to the joy of Paradise'".
Concluding his Angelus the Pope also remembered the numerous victims of the floods which have recently wracked many countries in South Asia. "While I share in the profound pain of those who have been affected - underlined Benedict XVI – I urge the ecclessial communities to pray for the victims and to support all charitable initiatives which aim to alleviate the suffering of those many people who have been sorely tried"; he also called on the support of the "International community". In the last three weeks floods have brought India, Bangledesh, Vietnam and Southern China to their knees, causing death and destruction : according to the latest figures over 30 million people have been made homeless, while in India alone over 1600 people have been killed and damages amount to over 270 million dollars.
at August 12, 2007

How awful for those people..& yes material possessions are so unimportant..much better having brothers & sisters than gameboys & TVs...