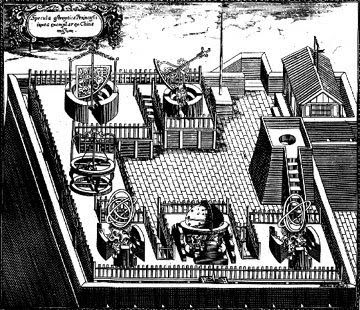 Beijing observatory, designed and built by Fr. Ferdinand Verbiest.
I found this on Ma Beck's site

Hummm...
Nice if it were true but the Father of Egyptology is generally regarded as Francois Champollion - not a priest but married with children.

The father of quantum physics is also generally regarded as Richard P. Feynman for his work on quantum electro dynamics - not a priest nor even a Catholic.

All right.
Here's my contribution to Ma Beck's quiz :

Q. When in 1945 they re-built a new Germany, with a new constitution, out of the rubble of the old, The Chancellor was a man called Konrad Adenauer.
What was his religion ?

Anon:
I think the father of "modern atomic physics" they refer to is Fr Thomas Wulf who was the first to see evidence of cosmic rays (1910) when he took his electroscope (every priest should have one) up the Eiffel Tower. If he hadn't been scared of heights he would have got more credit for his discovery but he wouldn't go in a hot air balloon to further his findings.

I'm surprised at the omission of Abbe George Lemaitre who is the father of modern cosmology (Big Bang theory 1932) and Fr Angelo Secchi the astronomer that first proved the sun was a star (1870).

A,
"[Father Athanasius] Kircher's interest also included a fascination with ancient Egypt, where he distinguished himself in his scholarship. Thus, for example, he showed that the Coptic language was actually a vestige of early Egyptian. He has been called the real founder of Egyptology, no doubt because his work was carried out before the 1799 discovery of the Rosetta stone rendered Egyptian hieroglyphics comprehensible to scholars. Indeed it was "because of Kircher's work that scientist knew what to look for when interpreting the Rosetta stone."
Thus, a modern scholar of Egypt could conclude, "IT is therefore Kircher's incontestable merit that he was the first to have discovered the phonetic value of an Egyptian hieroglyph. From a humanistic as well as an intellectual point of view Egyptology may very well be proud of having Kircher as its founder."

I never mentioned (nor does Dr. Thomas Woods, from whose book "How the Catholic Church Built Western Civilization" this information comes) quantum physics.
;)