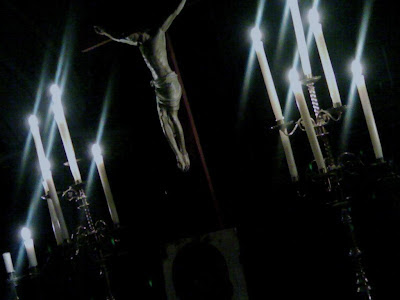 I was rather pleased to see the numbers for our monthly Traditional Mass had increased to about thirty five this weekend, up from about twenty, many of the congregation were from outside the parish including a more recently ordained priest from the diocese and a seminarian. I find it interesting to see that many of the older people have stopped coming whilst the number of younger people is increasingly slowly, younger people seem to be more willing to bring their friends. The ones who come find the silence a bit of a shock which they either hate or love.
When I first discussed having the Mass here with our Bishop, Kieran Conry, he said, "Do whatever you want, providing it doesn't interfere with the normal Mass times." This seems to be exactly what the Motu Proprio eventually said; it is an additional option, no-one is forced to go to it. When rumours of the Pope's document were rumbling in the rumour mills and I asked if we could have it weekly he suggested we wait and see. Again this seemed rather sensible.
One of the problems with not saying the Mass myself, yet, is simply that it is a monthly event, people forget which Sunday. The month before last Fr Durham the FSSP priest just couldn't get into Brighton, he was stuck in a traffic jam for two and a half hours because of the London to Brighton cycle ride, Mass was supposed to start at 6pm, and he didn't here until 7.45! After waiting for half an hour I said a Novus Ordo Mass for them.
I am not quite sure what we should do in the future, our Ordinary Rite Mass is at 5pm and in term time it is full of students and young people, I really don't want to celebrate one Mass immediately after the other. I can imagine that afer the deristriction in September members of the FSSP will be in greater demand, we'll have to see and make a decision for Advent, by which I should have acquired a certain "competence" in saying it.
at August 22, 2007

I am glad you have brought up this subject! I should like to attend the Tridentine Mass and would welcome a reminder on your blog as to which Sunday each month it is celebrated. Would this be possible?

I will try to remember.

Father, I will pray for you so you will find a way to say tridentine mass weekly in short time!
Luiz (Brasil)

Father, I dearly hope you'll be able to say weekly Mass in the extraordinary use at St Mary Magdalen. I've been to the 3rd Sun Mass a few times in university vacations, so an opportunity to do so every week would do wonders for my faith.

How about saying the Mass at 8.30 am or 9.00 am? Evening Mass on a Sunday is a bit funny: one feels like the day hasn't begun until the sun sets.

I am a parishioner of a Sussex parish which also has a monthly traditional Mass (West Grinstead). I agree that if you were to have a weekly Sunday Mass in the morning you would find a dramatic increase in your numbers. People find Sunday afternoons/evenings a difficult time to get to Mass, and traditional Catholics like to start Sunday with Mass not finish it. If you were to invite the FSSP priest to stay on Saturday nights, not only could you grab some extra free tuition but he could offer an early Mass at your Church (say 0900)on Sunday and then maybe be available to offer a second Mass elsewhere in the diocese at another sympathetic parish like West Grinstead later in the morning(say 1200). Once you were up and running with your 0900 Mass the FSSP priest could help with one elsewhere. Until the FSSP can produce enough priests for England they are going to be a precious commodity but one I am sure they will want to be shared around.

The FSSP priest, Fr Durham, who says Mass here, travels down from Reading where there is a thriving young, family centred community. It would be impossible for him to bilocate at the moment and celebrate a morning Mass here.

As for me I would be loathed to add to the the Mass schedule here unless there was a clear need, and "a stable community", in the sense of the motu proprio, which seems to mean a group of people one can rely on attending.
Celebrating Sunday Mass is spiritually exhausting, hence the Church's law about limiting binating and trinating. Some priests can be a bit slavish to this - ultimately he has to be concerned about souls - including his own.

One can only make a judgement on the evidence available, I want to be generous as the Holy Father encourages us, but one also has to be sensible.

My family and I would happily come on a weekly basis. Also, we could happily help with any music or paperwork/supplies/finances you might need. If you give people a little background on the meaning forms and functions I would hope that you might be surprised with the interest - young people especially. If what I experience as a novice is typical then you will have no worries and with God's good grace it will bear much fruit. Give it a good bash. If there is not enough interest you will be content that you did your part. If there is great interest then good fruits will flow. I will pray for you to find a way to make this happen if it's God's will. There is nothing to loose by trying. God bless.

See how the numbers build up. But it might become a sung mass.

Though 4pm is a bad time for a lot of people. 9 am is a good start to a Sunday.

""Do whatever you want, providing it doesn't interfere with the normal Mass times." This seems to be exactly what the Motu Proprio eventually said; it is an additional option, no-one is forced to go to it."

It now seems that the bishop (according to the Telegraph) meant that the Extraordinary Form could never be said at a time previously used by the Ordinary Form, i.e., never on Sunday Morning between 9 and 12. That's not quite the relaxed interpretation suggested by his previous comments.

I don't think Damian is right here.
I think what the Bishop would say is that one can't impose it on a community, and I think that would be my reading of SP. Obviously if there was a clamour for our Sung Mass to be in the EF, that would be another matter. Unfortunately that is unlikely in our diocese.