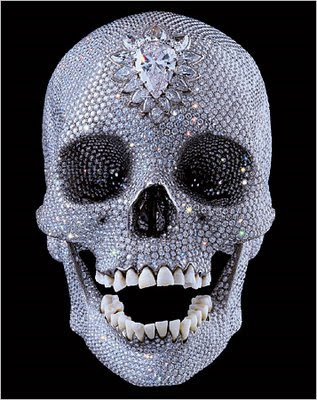 A diamond-encrusted human skull created by artist Damien Hirst has sold to an investment group for £50m ($100m).
The 18th Century skull, which is entirely covered in 8,601 jewels, is thought to be the world's most expensive piece of contemporary art.
The skull, from a 35-year-old 18th century European man, caused a sensation when it first went on display in central London on 3 June - not least because of its price tag.
Some critics dismissed it as tasteless while others saw it as a reflection of celebrity-obsessed culture.
Hirst said the piece, called For the Love of God, was "uplifting" and "takes your breath away".
The centrepiece of the 41-year-old's creation is a pear-shaped pink diamond, set in the forehead.

Apparently Hirsts mother gave the piece its title when first she saw it, and cried out, "For the Love of God!" My mother would have said the same, then added "let the poor thing rest in peace".

Now how better could 50 million be used? I find something deeply disturbing about this piece, what does it say about consumerism and morallity?
at August 30, 2007

My mother's reply would be "Jesus Mary and Joseph".
I think you could call it a celebration of the "Culture of Death".

It isn't art, it's publicity. I don't like sensationalism. I hope a genealogist discovers s/he is related to the person who once used that skull in life and demands it back.

he's not shy at praising his own work is he !

Brave modern artists - they never tire of having a go at the Catholic Faith:

Mac,
If only you had been my teacher!
It was of course 50 Million!
Now corrected.