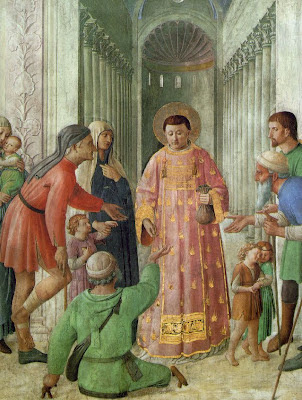 Fra Angelico's St Lawrence giving alms to the poor, click on the image to enlarge.

Fra Angelico is pictured dressed as for the Sacred Liturgy. I cannot help wondering if Fra Angelico deliberately chose to vest him in the colour of medium rare meat. Legend says he was grilled to death, apparently he is supposed to have said to his executioners "Turn me over I am done on this side". If you enlarge the image you can see that his vestments are decorated with tiny golden flames, Angelico saying that flames will lead to his glory.

Saint Laurence died during the persecution of Valerian, the Pope St Sixtus II had already been captured and slain with some companions, the clergy of Rome. Lawrence was sent to gather the wealth of the Church of Rome. A few days later he came to the Imperial Palace and cried our, "Behold, O Emperor, the wealth of the Church of Rome." Valerian looked out to see not gold, jewels and precious plate, but the widows, orphans and the poor of the city. Not best pleased, he had Lawrence grilled to death! 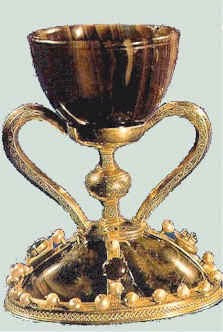 There is a interesting legend of the Holy Grail, or at least an early chalice and St Lawrence. This chalice was used by the Pope when he visited Valencia.
see here
at August 10, 2007

The book, "St. Laurence And The Holy Grail: The Holy Chalice Of Valencia", by Janice Bennett provides an thorough analysis of the ‘legend’ and provides it credibility.

At Amazon through the following link. http://preview.tinyurl.com/3c2jek

I've got that book. It's very good.