Confession as an Edingburgh fringe event? 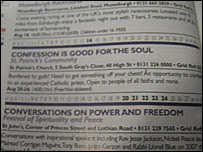 from the BBC
thanks to Laurence
The Catholic Church has an entry in this summer's Edinburgh Festival Fringe programme, offering confession.
Priests at St Patrick's, in the city's Old Town district, say they will be "open to people of all faiths and none" over five days, starting on 20 August.
St Patrick's Parish is well-known as the first home of Edinburgh's Hibernian Football Club, set up in the mid-1870s.
Confession is usually only afforded to Catholics. The Fringe event will be free and non-ticketed.

Confession is good for the soul, and maybe this is simply that, an opportunity to bear one's soul without absolution, a clever evangelical initiative.
However Confession for Catholics is a sacramental act, in which the baptised are restored to the life of Grace and therefore to communion with Christ in his Church. It seems to me a very unwise move to offer something that might bring confusion to the faithful, as it stands it seems to be casting pearls before swine.
I hope that the priests at St Patricks are going to be very clear about what they are actually offering. I hope too that this is not just another instance of clergy forgetting that the sacraments actually convey grace, rather than just a means of "celebrating our humanity" and confusing the sacrament with secular therapy.
at August 07, 2007

Whatever can they be thinking?

I wouldn't be surprised if the clergy at St Patrick's were offering confession to non-Catholics - they're not well known for their orthodoxy, which is worrying.

Yes, I saw this item on the television news.
Here is my old-fashioned way of looking at things :

Confession ?
A part of the Edinburgh Fringe Festival ?
The advertisement says :
"St. Patrick's : Venue No. 219
Burdened by guilt ?
Need to get something off your chest ?
Confess to an experienced Catholic priest."
(In bad taste ?
Well, yes. I would say so.
And dangerously misleading.)

My understanding is that Confession / Penance / Reconciliation is a sacrament of the Catholic Church, instituted by Christ for the forgiveness of sin and to impart grace to the soul.

And yet this "fringe event" is open to everyone of any faith and none ?

Protestants of whatever denomination, reject the notion of Confession as a sacrament.
Thre are but two sacraments : Baptism and the Eucharist.
As to people of no faith, the Church has always taught that the unbaptised cannot be validly absolved.

Moreover, the telling of one's sins is not sufficient for foregiveness. Without sincere sorrow and a firm purpose of amendment the confession is invalid.

"The sacraments are not just comforting rituals."
Not my words.
They were written by Pastor Iuventus in the Catholic Herald (3 August 2007).

So, what's on offer at St. Patrick's church, Edinburgh ?
A comforting ritual ?
Or an invalid sacrament ?

If neither of the above, what precisely is it ?

Can anyone enlighten me ?
(I obviously need "enlightening").

Having read about this on p2 of this weeks Catholic Times, I'm very unsure about the whole thing. The Redemptorists should have not even called it "Confession" unless it contains examination of conscience, contrition, confession and satisfaction.

'Confession is good for the Soul' is an opportunity to confess. It will only be the Sacrament of Reconciliation where the penitent is Roman Catholic. Our press release is very clear on this. Each penitent receives a leaflet indicating the format for Catholics, Christians of other churches, and people of other faiths/no faiths. In St Patrick's, Edinburgh, Sacramental Reconciliation is offered 6 days a week, 50 weeks a year, in addition to 8 annual Reconciliation services with individual confession and absolution. I hope this helps clear up any confusion. The event is not due to start until 20th August, and has generated a huge amount of interest nationally and internationally (being featured on BBC World, amongst other media outlets. It is already a success, generating attention for the wonderful Catholic tradition of Confession. Fr Ed Hone CSsR, St Patrick's, Edinburgh.

Father Ed makes a useful, pertinent, even crucial, distinction between: "an opportunity to confess" and the Sacrament of Reconciliation.

If this clarification does not enable critics of this event to take a more sympathetic perspective, then I wonder what would.

By a more sympathetic perspective I mean, among other things, one that not only reserves judgment (or indefinitely defers judgment), but also allows that this opportunity might be to the good.

With respect to the latter possibility, it seems to me that some critics of this opportunity are suffering from a failure of imagination. On the one hand - an over-stimulated imagination that synthesizes images of the bad out of elements that lie ready to hand in all of our faithless fears and worries. On the other hand - an under-stimulated imagination that is not (yet!) able to recognize an instance, here, specifically and exactly in this 'opportunity to confess,' of what every human being has always already seen, all around her, embodied in the whole of Creation: the goodness of God.

Yes: we have seen this great Good - every trespassing one of us – in spite of all our trespasses. Much more intimately than that, however, some of us have not only seen, but have both tasted and seen with a necessarily shared, liturgically informed vision, that the Lord, Jesus himself, is Good. We have known Him like this in those unguarded moments when we have taken a break from accusing and condemning our brothers and sisters (parents, spouses, children) and, by chewing upon the Flesh that we have in common, have adopted a grace-enabled posture that involves our trusting that God is nourishing us, as it were, in a way that passes under the radar of all our suspicion and resentment.

From the perspective of this trust and this optimistic (eschatological?) mode of imagination it seems to me (but I could be wrong - and so I defer judgment to the One that I am trying to trust) that nothing sufficiently dire is at stake here to warrant any accusation or condemnation in this matter. But then, too, from the point of view of the Kingdom, nothing is ever sufficiently catastrophic to warrant that - is it? On the other hand, as it seems to me, this ‘event’ is predicated on our confidence that we are nourished by our Creator at times, when we are not looking directly at, let alone chewing on, the Bread of Life, and that this might be something that Jesus is looking to do here, now, by way of an opening of the Church to the World that is not, to be sure, an invitation to the Sacrament, but one which involves something that is nevertheless sacramental.

Now, I wonder if this long comment embodies the very patterns of worry, pessimism, accusation, and condemnation that I have mentioned above? Well, perhaps I have done some judging here - but none of what I've said has been intended, in any case, as a judgment that would seek (fruitlessly, of course) to exclude anyone from the Kingdom.

Isn’t it remarkable that the righteous brother, wishing to exclude his sinful sibling from his father’s domain ends by staying stubbornly outside the epicentre of its radiating happiness? Of course, the righteous one doesn’t realize where he is: he continues to imagine that he is an insider while his brother is not. Thank heavens that his father does not leave him alone on the (infernal) ‘inside’ – lost, outside the trespassers’ Homecoming.

I just want to suggest that we who have seen the inside of the Ultimate Party might want to avoid excluding anyone from the mysterious and so supremely hard-to-percieve threshold of the Kingdom. This threshold is the place where, as I take it, anyone is standing - who has woken up to the fact that she hurts, somehow, in the very conditions of possibility of her continuing to live - hurts, precisely, from having been too long unforgiven.

And so I say: thank you Fathers Ed, Michael, and Richard for reaching out to those who are hurting in this consciousness of being unforgiven, of being outsiders, condemned as losers, criminals, monsters in their own families, communities, nations – perhaps in the whole of the world itself.

Thank you for reaching out to people who haven’t the slightest inkling of how to frame their predicament in theological terms at all, in terms of sin and the way in which sin distorts everyone of our relationships.

Thank you for creating an opportunity for anyone and everyone to taste and see that the Lord is Good – and for doing so without insisting that they know or acknowledge the One that they are encountering.

Thank you for doing what I am so bad at doing: evincing the reality that I have known, disclosing the good news and not hiding it – showing by way of example that there really was, is, and will be One who does not accuse or condemn, One who judges of trespasses that they are trespasses, yes, but whose judgments are inseparable from his unconditional declaration: I do not condemn you.

And I'd like to let this same Lord worry about the possibility that these people-at-the-threshold, however they may conceive of this opportunity to confess, won't know that what they have tasted, what they have tested and sampled down at St. Patrick's, is Him, and neither a merely 'comforting ritual,' nor an 'invalid sacrament.'

Lord, I want to ask, let this taste of you, though incognito, haunt their dreams of happiness.

And Lord, I want to ask, as well, let this taste of you, only slightly better known and loved by us, erode the hopelessness and anxiety that continues to constrain our own, believing-unbelieving imaginations.