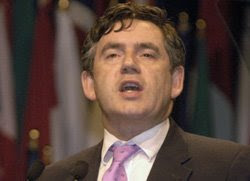 (CNA).- Catholic Labour Party MPs have refused an offer from the British ruling government to allow them to abstain from voting on a bill that would allow the creation of human-animal chimera embryos and would permit in-vitro fertilization treatments to single or homosexual women, The Telegraph reports.
A defeat of the bill would be considered a major setback for Prime Minster Gordon Brown.
Geoff Hoon, the Labour Chief Whip, offered to allow objecting party members to stay away from the vote on the Human Fertilization and Embryology Bill rather than to follow their consciences and vote against the government’s legislation.
Several MPs told the Sunday Telegraph that the deal was not acceptable and that they will vote against the bill.
Greg Pope, the Labour MP for Hyndburn, said, "I have had hundreds of letters from constituents about human-animal hybrids. The idea that I turn round to them and say the Chief Whip has given me the day off from voting will cut no ice at all."
Dozens of backbenchers and as many as twelve ministers are thought to oppose the bill. If they join with bill opponents, the bill could be defeated.
The Telegraph has reported that prominent Catholics in the Brown government are prepared to resist orders to vote for the legislation. They include Transport Secretary Ruth Kelly and Welsh Secretary Paul Murphy.
Prime Minister Brown is expected to tell them that though they can abstain from voting on religious grounds, voting against the bill could mean their removal from the government.
at March 11, 2008

Hey! Keep up, Father. I blogged on this last week.

Paulinus - first with the news!

This bill MUST be defeated, and not only that the HFEA must be brought to account and a line drawn in the sand which states that the violation of human embryos and human genetic material beyond this point is immoral, unethical and illegal.

'A defeat of the bill would be considered a major setback for Prime Minster Gordon Brown'. My goodness - is this all about Mr Brown's personality and ego??? That he would rather see human/animal hybrids and other abominable violations of the dignity of human life than see his own obviously fragile personality 'hurt' by a defeat in the commons. Ye Gods!!!! This guy is not a leader and in fact he is never going to be in the celebrity big league either!

'Geoff Hoon, the Labour Chief Whip, offered to allow objecting party members to stay away from the vote on the Human Fertilization and Embryology Bill rather than to follow their consciences and vote against the government’s legislation'. Pathetic that in 21st Century Britain our government plays games with politics and policies and whose antics seem more appropriate in a 'Grey Friars' Billy Bunter or 'Tom Brown's Schooldays' novel!

WE elect the MP's and if this Country of ours still respects Freedom of speech and conscience then our MP's MUST by constitution be allowed to vote as they believe and NOT because some goon with a 'whip' bullies them into submission. Frankly the way this country is run is a joke!

We should pray for all our Catholic MP's and all those MP's of goodwill who understand the inherent dignity of the human person whether a tiny embryo or a frail octagenerian. Pray that the Holy Spirit truely inspires their consciences to stand up to the evil unfolding before us.

What shall it profit a man if he gain the whole world and lose his own soul? In a choice between the ethics of Christianity and those of Dr Mengele the duty of any MP is clear.

For voting against the Bill Catholic MP's are threatened with the sack.If this is not BLACKMAIL then I don't know what is.

Nothing is sacred anymore they are even talking about breeding babies with disabilities.

It is not Global Warming we should be worrying about but the mentality of the people running the country.

Why not phone, email or better yet send a hand-written letter to your MP to encourage them?

'Prime Minister Brown is expected to tell them that though they can abstain from voting on religious grounds, voting against the bill could mean their removal from the government'.

Would you want to be a minister in this autocratic government run by a dictator! Democracy is dead in Britain. God help us.

Lord Goldsmith must be feeling a chill across the back of his neck,he wants all school-leavers to swear allegiance to Queen & Country.
The way things are going the revolution can't be far off and we know who will be going to the Guillotine first,he seems to know anyway.

Let us pray the rosary for the Catholic and other MPs who will vote against the bill, especially that they will be courageous.