Mikhail Gorbachev admits he is a Christian 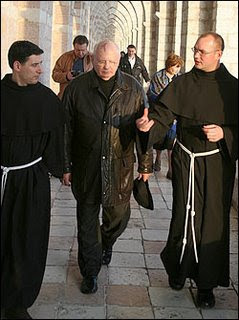 h/t Rorate Caeli
Mikhail Gorbachev has just publicly revealed his Christian faith. And how interesting it is, that he chose to do so by going as a pilgrim to a Catholic shrine -- the tomb of St. Francis of Assisi. (Mr. Gorbachev was baptized Russian Orthodox as an infant)

From the Telegraph:
By Malcolm Moore in Rome
Mikhail Gorbachev, the last Communist leader of the Soviet Union, has acknowledged his Christian faith for the first time, paying a surprise visit to pray at the tomb of St Francis of Assisi.
Accompanied by his daughter Irina, Mr Gorbachev spent half an hour on his knees in silent prayer at the tomb.
His arrival in Assisi was described as "spiritual perestroika" by La Stampa, the Italian newspaper.
"St Francis is, for me, the alter Christus, the other Christ," said Mr Gorbachev. "His story fascinates me and has played a fundamental role in my life," he added.
Mr Gorbachev's surprise visit confirmed decades of rumours that, although he was forced to publicly pronounce himself an atheist, he was in fact a Christian, and casts a meeting with Pope John Paul II in 1989 in a new light. Mr Gorbachev, 77, was baptised into the Russian Orthodox Churchand his parents were Christians. In addition, the parents of his wife Raisa were deeply religious and were killed during the Second World War for having religious icons in their home.
Ronald Reagan, the former United States president, allegedly told his close aides on a number of occasions that he felt his opponent during the Cold War was a "closet believer".
Mr Reagan held deep religious convictions himself. However, until now Mr Gorbachev has allowed himself to express only pantheistic views, saying in one interview "nature is my god". After his prayers, Mr. Gorbachev toured the Basilica of St Francis and asked in particular to be shown an icon of St Francis portraying his "dream at Spoleto".
St Francis, who lived in the 12th century, was a troubadour and a poet before the spiritual vision caused him to return to Assisi and contemplate a religious life.
Even in his early days, St Francis helped the poor, once giving all of his money to a beggar. As well as spending time in the wilderness, he also nursed lepers and eventually became a priest. "It was through St Francis that I arrived at the Church, so it was important that I came to visithis tomb," said Mr Gorbachev.
"I feel very emotional to be here at such an important place not only for the Catholic faith, but for all humanity."
He also asked the monks for theological books to help him understand St Francis's life. Father Miroslavo Anuskevic, who accompanied the former Soviet leader, said: "He was not recognised by any of the worshippers inthe church, and silently meditated at the tomb for a while. He seemed a man deeply inspired by charity, and told me that he was involved in a project to help children with cancer.
"He talked a lot about Russia and said that even though the transition to democracy had been very important for the world, it was very painful for Russia. He said it was a country which has a great history, and also a great spirituality."
at March 20, 2008

I'm a little surprised at this story: it must be at least 15 years ago that Gorbachev gave an interview in which he was asked whether he was a believer. His response was ‘Oh: Raissa is the atheist in our family’, which everyone took as a ‘yes’, at least in his case.

Father,
I didn't think that the seraphic father was ordained to the priesthood?
I suppose I'll believe Gorbachev when he stops lecturing for a new world order.
M Kinsey

Quite right,
Francis was a deacon, not a priest. Franciscans are friars not monks, most journalists are not well informed.

I love that Gorbachev said that "nature is my god." It's a nice reminder that religion started in the wilderness, and that the wilderness was where God gave the Jews the Ten Commandments and the Torah (known to Christians as the 'Old Testament').

Their 40-year journey in the desert transformed a group of ragtag slaves into the nation of Israel. Concepts such as our modern court system, the ethical treatment of animals, and a weekly day of rest, stem from this time of wandering in the desert.