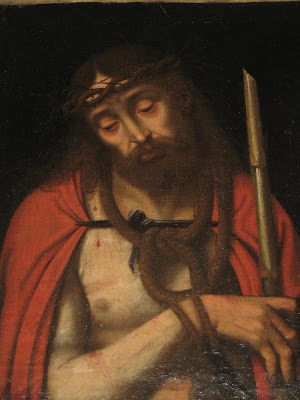 Today my dining room has been turned into a doctor's surgery, Dr Frank Arnold from Medical Justice came down to examine some Brighton asylum seekers who claim to the victims of torture.

The point of torture isn't just extract information it is to degrade, humiliate and dehumanise. Rape or sodomisation, for both men and women goes along with burning, electricity, tearing, cutting or drilling of flesh and bone. The victims are so often so humiliated by their experiences that it is the last thing they want to admit to, they don't want to relive their experiences. The default position of those who recieve asyulum petitions is simply disbelief, the psychological effects of torture are a sense of isolation and depresssion, a continued sense of fear and vulnerability.

As you meditate on the suffering of Christ this Holy Week remember that night when he was left to the mercies of the Roman soldiers. The Gospels tell us of him being spat upon, struck with a reed, played with as a fool, crowned with thorns and flogged, I suspect much worst things happened to him than the Gospels dare to tell, pray for the victims of today, Christ is their brother.
at March 15, 2008

Thanks for this good reminder Father, I too have always thought our Lord was subjected to much worse than we could imagine.

Excellent point, Father. I'm sure they "edited" a lot of things in that way. Although, I suppose the gospel report just what the apostles and disciples had passed on that they had witnessed.

I agree with you. The more I reflect on Christ's Passion, the more it seems to me that Jesus would have been at the mercy of torturers from the time of his arrest onwards. I do not think that the scourging was the only occasion that Jesus was thrown into the torture chamber.

Is the reason why the gospels are fairly light on detail about Jesus's physical sufferings the fact that, 2000 years ago, people would have had a very good idea of the horrors visited on any man arrested and executed by the Romans?

I think that the film, The Passion of the Christ, detailed much that I had never thought. But, they got it right. I watched it again just a week ago and it brought tears to my eyes. Jesus was dead on his feet. The centurian could see that and conscripted Simon of Cyrene to help because Jesus would never have made it to Golgotha otherwise.
What a price to pay for my sins!
How much Jesus loves me!
I can never be worthy of him!
JARay

It is very interesting how the Socialist Workers' Party, who regularly turn out to protest about what the British, the Americans and the Israelis are up to, are silent on Tibet, Darfur and various other nasty situations.

Um...
Not sure if I should say anything but I had to research crucifixion and roman scourging for my work on the Marcan Passion Narrative.
Please remember that the moment Our Lord was condemned to death by crucifixion he became a non-person [it's also one of the theories about why barabbas is called barabbas - there's possible illegitimacy ; but it could be his father was executed and therefore unnamable by judaic as well as roman law so barabbas was called 'his father's son' ]
Non-persons were subject to the full villainy of the Roman soldiers' hyper-violent malice, contempt and hostility - with no reprisals - they could do anything - and I mean anything - to the criminal.
If you read matthew [and funnily enough I think it was Enoch Powell who made the point] what happened is edited - there's no proper pericopal structure - merely enough to emphasise the extreme poignancy and bitterest of ironies of the kingship, the messianic identity, the Godhood, all being mocked.I cannot remember where it is [may be Ignatius of Antioch or Polycarp ] where there is a referral to possibly the Q or M sources where there is a brief more brutal depiction which seems to be a proto-gospel quotation.
remember too that our imagery surrounding the crucifixion is simply wrong [ironically everything we know about contemporary crucifixions is verified by the shroud of turin - e.g. the arms over the crossbeam , the hemlock wedged in to hold the nails in place; the extension of the feet nail holes indicating the pivot to prevent long-term diaphragm respiration without tearing of the feet etc.
The top of the cross was barely seven feet above the ground - the reason we imagined them to be high was the sponge on the hyssop stick - the stick was to prevent lost fingers - not to reach any height - remember too golgotha was a rubbish dump -an open sewer - vermin cared little if their food source was dead yet - the body was not placed as the JPII cross imagines but the knees were raised to the side and the body contorted -and the pains involved are unimaginable - the direct shredding of nerves, the excruciating rapid muscle death, the poisoning of limbs with tetany, oedema fluid flooding the pericardium and drowning the heart from without - and death doesn't come !!! the body dies around the person before they ultimately expire....there is a no more sadistic form of death - it's there as a form of proselytism to enemies - so die the enemies of Rome -remember too hanging from a tree was the punishment in Judaism for a false prophet - again a non-person - there could be no reprisals for any degree of humiliation or malevolence one inflicted upon the dying....

We are not informed of this because we could not cope with it; even in the Mel Gibson bloodthirsty debacle it was nothing compared to what truly happened....

When we hear cretins like barbara thiering or the da vinci code lunatics speaking of christ surviving the crucifixion we must understand this is an impossibility - crucifixion was not like the filipino emulations - the victim - even if taken down within a few hours would not even be able to crawl upon their bellies - the muscles and fascia would have been damaged and poisoned irreparably; neuropathy would be the predominant sensation -no feelng except for agonising electrical short-circuiting in the limbs - heart damage would prevent even the slightest physical exertion - brain damage would cause intermittent convulsions and fits.

So in your wildest imaginings never, ever, ever imagine that the resurrection was not exactly as it was - it simply could not have been Christ having a cataleptic fit on the cross and presumed dead - Our Lord and saviour died there - there is no way for it to have been any other way...the only way was for there to have been either a resurrection or every apostle and disciple lied - and were tortured and executed solely upon that lie...

all too often we tend to shy away from the reality, the history, out of fear that the gospel stories aren't true - aren't real, and there's a possibility that the whole of our faith is a lie [we're told such every five minutes by new 'evidences' for the historical jesus by some academic ]

we need not fear history - we need not shy away from the truth out of terror that it reveals things we dare not face in our lack of Trust in the dogma of the Church...because in history it is there we are utterly vindicated !

It really happened !!! He did die - He is risen - don't run away from it because the world cannot face the fact of it....