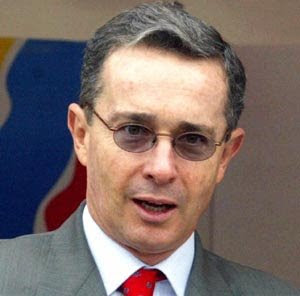 BOGATA, Columbia (CNA) - The Colombian daily “El Tiempo” revealed on Holy Saturday that a crisis that could have ended in an open conflict between Colombia, Ecuador and Venezuela was averted by Colombian President Alvaro Uribe confiding the situation to the intercession of Mary under the three different titles by which she is the country’s patroness.

The crisis between Colombia and its southern (Ecuador) and northeastern (Venezuela) neighbors started On March 1, when Uribe ordered a military raid into Ecuador's territory against a rebel camp used by Marxist guerrillas to launch terrorist strikes. The raid targeted and killed the No. 2 FARC rebel leader, Raul Reyes.

Quoting Fr. Julio Solórzano, Chaplain of Colombia’s Presidential Palace, El Tiempo revealed that on March 5, when the rhetoric and blames between the presidents was increasing tensions, President Uribe called for a Rosary to pray for the end of tensions.

The Rosary, prayed at the Presidential Palace’s chapel, was dedicated, upon Uribe’s request, to the Marian to Our Lady of Chiquinquira, Our Lady of Coromoto and Our Lady of Mercy, respectively the patronesses of Colombia, Venezuela and Ecuador.

Uribe invited all officials at the Presidential palace to the Rosary, as well as the minister of Defense and the Interior.

“For believers –El Tiempo wrote- the prayer was more than effective, since only two days after the presidents of the three countries shook hands during the Group of Rio summit, and for many the crisis was over.”

In fact, on April 7, at the Dominican Republic summit, the three presidents vented their differences, but agreed to stand down after Colombia apologized for the raid.

“The President is a man of faith, he always carries with him a wooden Cross and a Rosary. I have heard him pray several times in the motorcade or on the presidential airplane.” “He always tries to be coherent with his faith in his work, pleasing God with what he does,” Fr. Solórzano was quoted by the “El Tiempo.”
at March 29, 2008

What a wonderful example for politicians. The president of Columbia was most 'Christ-like' in the manner he conducted himself at a recent Latin-American conference, where the threat of conflict was diffused.

The Blessed Virgin shows herself to be a true mother to those that have confidence in her!

Felices Pascuas from Medellín, Colombia! (but please note that it is Colombia not Columbia).

President Uribe is a Paisa, a person who comes from Antioquia, a part of the country where Catholicism in general, and Marian devotion in particular, is still fairly strong. One of the characteristics of Paisa speech is the use of "¡Eh, Ave María!" as an exclamation of surprise or admiration.

Our Lady's name is on Paisas' lips because she is in their hearts, and it is natural for them to seek her aid in all emergencies. Despite all the troubles that there are here, I find it a joy and a privilege to serve such people as their priest.

With reference to your post about so-called "ex-Catholics", perhaps other culprits who should be added to your list are those who promote an excessively cerebral or an excessively individualistic approach to the Faith, and who have belittled the importance of communal popular piety.

The Congregation for Divine Worship's 2001 Directory has some important things to say about this. Through popular piety the Faith can permeate every aspect of life, and sanctify every hour of the day.

In his 'Catholic Revival in the Age of the Baroque' Marc Forster says, "What eighteenth-century Catholics wanted was not so much a self-reflective religion as one that allowed them a personal relationship with God, Christ, and Mary. More than receiving preaching and catechism, the people needed to bear witness, something they did within the sacramental and ritual framework of the Church."

I think that this applies to many 21st century Catholics, too - and not only to those in countries like Colombia.