Seven (New) Deadly Sins? Or Not? 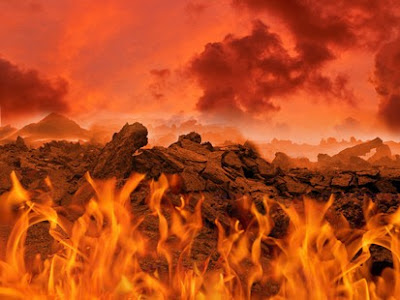 From America, h/t Jeffrey Smith who says, wisely, "It's the only sensible words that have been written about Bishop Girotto's interview in L'Osservatore Romano. Both the press and the usual suspects in the blogosphere are, as usual, distorting some good comments on social sin.
Admittedly, the press really mangled this one, but bloggers aren't far behind. How many statements from the Holy Father and Vatican officials will it take before the irresponsible bloggers, who put their so-called "conservative principles" above Catholic principles, admit that the Church teaches respect for the environment?

As an example of how the media sometimes can get a story wrong, or at least confuse things unnecessarily, witness the story from the March 8 issue of L'Osservatore Romano, which included an entirely sensible interview with Bishop Gianfranco Girotto, an official at the Apostolic Penitentiary, on the subject of social sin. Contrasting an older understanding of sin as more individualistic in nature, Bishop Girotto noted that sin "today...has an impact and resonance that is above all social, because of the great phenomenon of globalization." He pointed to a number of "social sins" (by now a familiar term to Catholics accustomed to hearing it applied to racism, sexism and anti-Semitism). Among those he mentioned were economic injustice, environmental irresponsibility, accumulation of excessive wealth and genetic experimentation with unforeseen consequences.
The media's reporting, however, transmogrified this into something different. "Seven New Deadly Sins," wrote the Times Online, mistaking the main point of the interview, which was that these new social sins were in fact different in nature for those more individualist "deadly sins," which focused more on regulating a variety of human passions. "Vatican Lists New Sinful Behavior," wrote the Associated Press, as if accumulating excessive wealth hadn't been already condemned by the church for centuries, and, before that by--well, Jesus for one.
The Vatican's intent seemed to be less about adding to the traditional "deadly" sins (lust, anger, sloth, pride, avarice, gluttony, envy) than reminding the world that sin has a social dimension, and that participation in institutions that themselves sin is an important point upon which believers needed to reflect.
In other words, if you work for a company that pollutes the environment, you have something more important to consider for Lent than whether or not to give up chocolate.
James Martin, SJ

"Contrasting an older understanding of sin as more individualistic in nature, Bishop Girotto noted that sin "today...has an impact and resonance that is above all social, because of the great phenomenon of globalization"


I do not think this is sensible at all. A person commits a sin. It is committed by an individual. It is an individual act. Our sin wounds the body of Christ so there always was and always is a spiritual and social cost to it. To say that sin "has an impact and resonance that is ABOVE ALL social (meaning worldly in this context)" is very strange. A good Catholic should be more concerned about offending God our Father than offending his social scene. He is proposing a "man centred" understanding of sin. The fact is, if we were careful not to offend God it would naturally follow that our social impact would be positive - "Seek ye first the Kingdom of God". Bishop Girotto seems to suggest that ABOVE ALL we should be seeking the kingdom of man. Maybe I have misunderstood him but that is what I read here.

Also, the use of this phrase "older understanding" in a time that discards the old as being passe is a subtle stab at Truth. It is generally used by people who have little understanding. For instance you will have people objecting to the "older style" of personal piety reflected in the lives of "plaster footed saints" because they have no idea about holiness and cannot believe that Truth, if pursued with dedication, bears miraculous fruits.

"if you work for a company that pollutes the environment, you have something more important to consider for Lent than whether or not to give up chocolate"

To abstain from chocolate may be a far more sensible thing to do than worry and fuss about things that we really have very little control over.

The trouble with this stuff is that there isn't a great deal most of us can do about "social evils" in the broad sense. We certainly can't really control what governments and large corporations do in any meaningful way. However, we can all, of course, modify our own behaviour and put aside, through grace, our own sins. The reformation of personal sin must surely come before anything can really be done about society's "sins", otherwise penance for the broad sins becomes a sort of "get out of gaol free" card: "I am sorry about it but, you know, it happens. And I do recycle, after all."

Sometimes I think the we would be better of if the secular press would just ignore the Catholic Church altogether.

I read this in the telegraph, the writer happily told me that the original seven deadly sins have been abolished and threw in some spiel about them been introduced by Pope Gregory the Great to try and lend some illusion of credibility to the article and convince us that the writer actually knows what they are talking about.

Apart from the fact that it was largely made up, more worringly the article gave the impression that sins were only sins because some men in Rome decide they are and that men can just as easily decide they are not.

Anon. We can't wash our hands of this and think we are doing enough by giving up choccies for Lent.

Of course personal holiness is important but consider this. I have a pension from my employer. The income comes from funds invested in goodness knows what, but no doubt someone somewhere is being ripped off to keep me in the manner to which I am accustomed. And like most house owners in Britain, I find the value of the land my house is standing on has gone up by a factor of at least ten since I bought it 25 years ago. This value has not come out of nothing, but has been created by the presence and activities of the community. It is also more than I have ever earned, or could have earned, by my own actual work. There is something seriously wrong here, because the other side of this coin is that people come to places like Brighton from the depressed parts of the country and end up living in shop doorways, harrassing passers-by through begging and trying to sell the Big Issue. The one is the cause of the other. This is how institutional sin operates. In this case, the precise mechanism is a tax system which robs people of the fruits of their labour and allows the public value that turns up in land rents to be pocketed by those who own property - real estate. One result is that 85% of Britain's population lives in one-third of the country's land area, with all that implies in terms of things like housing shortages. If we are concerned about promoting family values, surely we cannot be complacent about a situation where housing is unaffordable and both parents are having to work long hours to keep up mortgage payments.

In the short term there is nothing anyone can do about it individually because it is the result of a structure that has been created by society and in which everyone participates willingly, or at least acquiesces. But it is not good enough to say that the poor have always been with us and salve our consciences with making donations to Cafod and giving money to buy food for the soup run.

Before anything can happen, the detailed mechanisms of these structures need to be uncovered. People will have to do some analytical thinking. Which stretches and hurts the old brain cells. And some of us may have to give up a little. Which, as a Brit, rather than thinking about giving up and leaving the festering country, I feel would be well worth it as we are one of the most unequal societies in the EU and it can be felt as soon as one goes out in the street. I would happily give something up for the sake of having a civilised public realm - the possibility of the existence of which which people in the UK have largely forgotten.

Sin is an offence against God.

Sin has always had a social dimension.
One's own individual sin always impacts on others, one way or another, sooner or later.
But I don't think there's anything new about that !