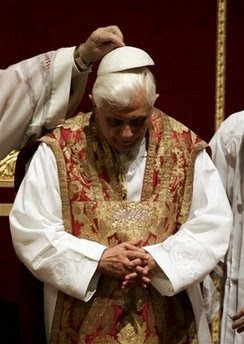 The Sacred Liturgy isn't just about what happens in Church, it should touch every aspect of our lives, it has always been so. Fasting and feasting are an important part of the liturgy, I feel quite smug that at the end of Lent my belt needs to be tightened an extra two notches, but now is the time of feasting!
Yesterday I had a splendid cote de beouf, with a delicious bottle of Chinon, with a seminarian and later shared a bottle of rather nice bottle of prosecco with a couple of the younger clergy of the diocese, in the evening there was a school governors meeting, just to get over, gently, the fact it was still Easter I took over some fizzy wine I had been given. The rest of the week seems to be about partying too.
Most of priestly conversation seems to touch on liturgy, I prefer that to diocesan gossip, we had all been to the Chrism Mass last Wednesday, it might just be my friends, but we were all a bit surprised by how retro the liturgy was this year; odd introductions, apparently from the States were still in the renewal of priestly promises, which are not in the Roman Rite. Music by people like Inwood, Dean, Ward and Haugen, which most parishes, I had assumed, had moved away from, where still there, hardly music that merited to continue in use for any length of time. All those superfluous Hosannas and needless repititions, and changes of texts! It was a bit of time warp, a move back twenty years. Even the congregation, seemed to be the same people who would have been there two decades ago but now are bit more stooped and greyer. Maybe that is because I am older and greyer.

It is very easy to for any priest to live in a little world of his own to assume that what is happening in his parish is happening elsewhere. A friend of mine was a little irked when his new head teacher expressed surprise that he didn't allow the staff at his school to pass the Body and Blood of Christ from one member of staff to another during Mass, "... but Bishop X always does that whenever he celebrates mass with teachers," she said. Most dioceses actually have autodidacts as their "expert" liturgists, possibly they picked up some diploma in pastoral liturgy at some American university twenty years ago, and have continued to demonstrate their liturgy is an excercise in nostalgia, not looking back to The Tradition, but to their own youths, 20/30 years ago, it is becoming increasingly off putting.
The problem most of us have is, what should be the liturgical norm?
Most priests pick up notions of liturgy from rather selective reading, from what they see other priests doing, peer pressure amongst priests is as powerful as it is amongst adolescents. There are pretty clear guidelines in the General Instruction of the Roman Missal, Ceremonies of Bishops, Sacramentum Caritatis and other documents, but who really bothers to to read them? Who apart from me, who uses a communion plate? (SC, says it should be retained), how many female feet were washed on Holy Thursday, how many three sin or less penitential services took place during Lent?
One of the good things is seeing what happens in Rome at Papal liturgies, through the net or EWTN we can see what the Pope is doing. I am pleased to say I know what happened in St Peter's on Good Friday in much more detail than I know what happened in our own Cathedral.
at March 26, 2008

The more a bishop moves from the practice of the Universal Church, the more dificult for priests (and lay people) to be, "esse" in a state of communion with him, rather than merely to do things, "agere" in communion with him.

Yes Father, it must be difficult to try and stay on the straight and narrow when all around are examples of infidelity to the norms and rubrics. But a little leaven can go along way! It took a long time to get to where we are now and it will take time to get back to 'normal'.

I think required reading for all priests should be the Holy Father's "The Spirit of the Liturgy". If they read it and take it to heart, it may inspire them to go back to the other instructions and re-learn how the Liturgy should be celebrated.

But the example of the Holy Father can also go a long way to make everyone reflect on what we are doing and why we are here.

If they "do the black and read the red" they won't go wrong. Any priest or bishop who deviates from this is not in union with the mind of the Church on the Liturgy. There is thus no moral obligation to follow their lead. Simple.

The tuneless ditties you had to endure are so passe. Maybe try boycotting the Chrism Mass - I know good sound priests like yourself who do just that.

Well I reckon our PP can draw his belt in 3 notches! You've both inspired me to get some weight off..not sure if that was the point of your post! But there you go...

I'm afraid you're still in a minority Father - a growing one I hope, but a minority still. But, like gor, the metaphor of leaven occurred to me, too, so please do not be discouraged.

The reality is that what you experienced at the cathedral is what the Church practices at large. When he dies it is unlikely that BXVI's liturgical policies will have much shelf-life. They've come too late but, in any case, would only appeal to a precious minority. The majority of Catholics are content with things as they are.

"The majority of Catholics are content with things as they are."

Quite right, and they are never seen in a church. Because they are content we shouldn't be.

Anon, the problem with bad liturgy is that it leads to bad understanding and bad theology. So if the majority of Catholics really are content they need to be woken up out of their complacency.

That said, liturgy needs to be done properly. The rubrics are only a starting point and have to be adapted to the particular circumstances, including the layout of the church. And everyone involved on the sanctuary needs to know what they are doing and why. This requires thorough preparation and an MC who will train and rehearse his servers, write down what has to be done and ensure the priest has a copy (the priest must allow himself to be bullied) The priest must then follow those instruction. And someone should have the explicit responsibility of making sure books are correctly marked so that the priest is not having to browse through the missal in the middle of mass.

The liturgy has to be planned like a military operation which, come to think of it is what it is, for the church is at war with Satan. We have to start taking things seriously

I'm afraid I haven't been to the Chrism Mass for years. The minstrel who calls himself a director of music and peddles ditties from Iona and, even worse, his own compostitons (the arrogance of the man!), the lack of mitre and crosier properly worn.
/used and the usually apalling homily, delivered one year with its focus on deacon's wives....I just can't stomach it before the Triduum. I send the deacon for the Holy Oils and hang on for EWTN's coverage on Maundy Thursday morning. By the way, where did those hideous modern oil containers come from that are wheeled around in St Peter's at the Chrism Mass?

If a priest follows Ceremonies of the Modern Roman Rite by now Bishop Peter Elliott he can't go wrong.

Say the black, do the red as Fr Z says.

Can we have a copy of "ceremonies" so the MC and servers can study it?

A few years ago there used to be a coach load of parishoners go from our parish to the cathedral, ( less than an hour away). Now so few go that the PP can give them a lift and they are all over 65. I have heard one lady say she goes just to support Father. Yet our church is full on Sundays. From the comments I have heard most other parishoners feel that the level of liturgy, music, etc., at the cathedral is a bit embarrassing. We have, needless to say one of the most liberal and wishywashy bishops in England. I find the comment that most Catholics are content with what they have plain wrong. I was in a Catholic Church, (not my parish), on Holy Thursday when after a fairly reverent but bare bones Mass the whole cogregation joined loudly and fervently in Tantum Ergo. They would have been just as good at the Pater Noster and indeed the ordinary of the Mass had they been given a chance but the priest is, I am told, afraid that such a thing would get back to the bishop and be frowned upon. He is young and has his own parish but is under the eye of a fairly liberal priest in a larger parish hearby.

if only everyone said the black, and did the red, liturgical life would be easier. I just wrote a litle thought on this the other day at my blog. Prayer and continue saying the black, and doing the red. can't go wrong there :)